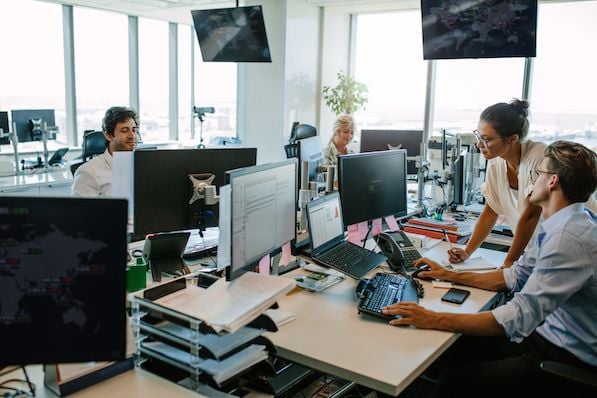 For more than 8 million people, Slack has become the tool they open first thing in the morning to get the workday started. And it’s become the leader of the team collaboration industry, simplifying people's work and boosting their productivity.

But not everyone is completely elated with Slack. While some say Slack costs an arm and a leg to be able to search for more than the 10,000 messages that its freemium version limits users to, others prefer a self-hosted solution -- which Slack doesn’t offer -- to gain more control over their team’s communication.

Two of the top Slack alternatives, Stride and HipChat are also shutting down soon, so more people are looking for affordable team chat tools that meet their needs.

If you’re in the same boat, take a look at this list of the best Slack alternatives in 2018.

Unlike most Slack alternatives, Google Hangouts isn’t free. But if you happen to have a corporate G-Suite account, -- which starts at $5 per user for each month -- you'll have automatic access to Hangouts.

The team chat app doesn’t have public channels like Slack, but you’ll be able to send direct messages or communicate in a group or a room. Rooms are thread-based conversations where you can start a new thread when you get new ideas. 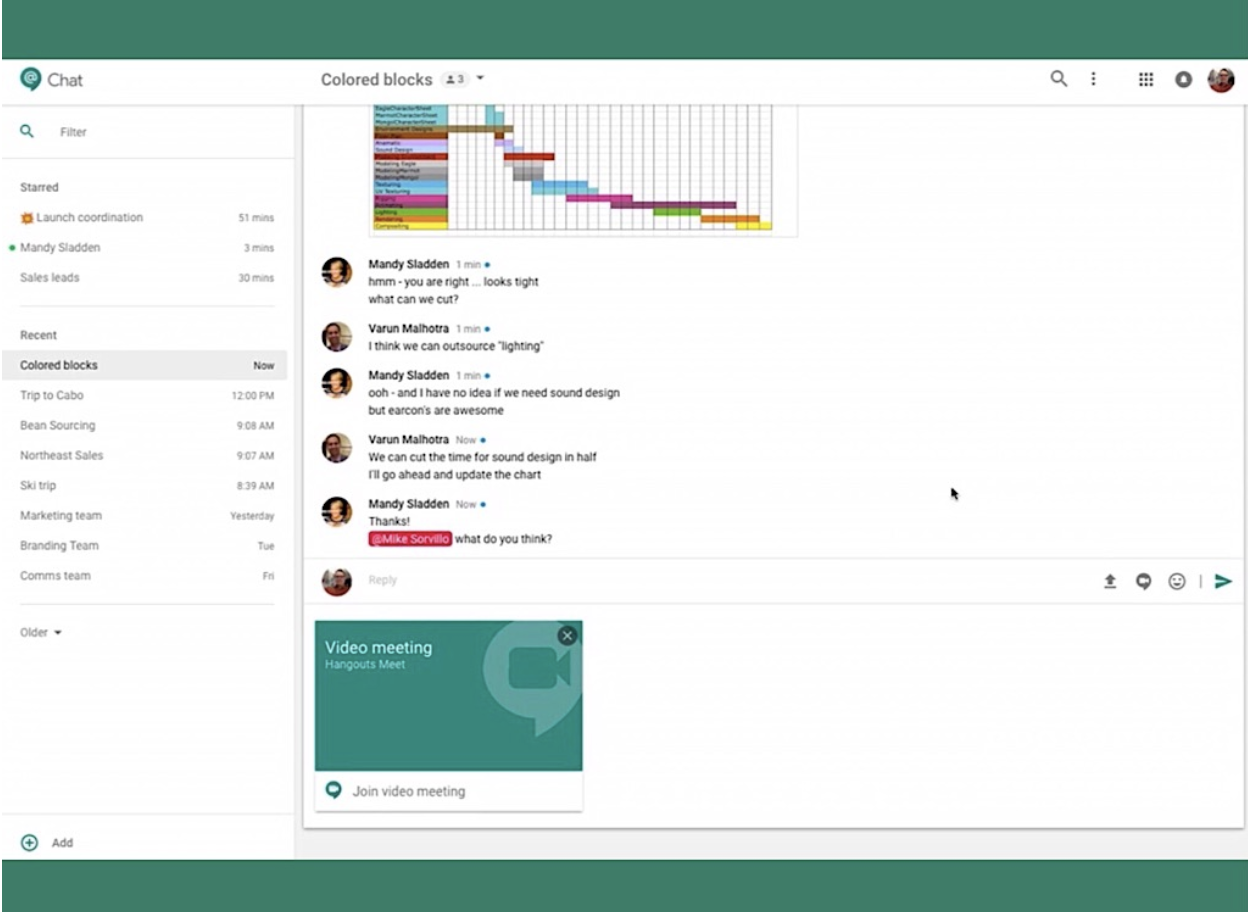 Chanty is a simple team chat tool for small and medium-sized teams that doesn’t limit its searchable message history. Similar to Slack, you can communicate in public and private channels and through one-to-one conversations. Chanty also organizes all your files, links, tasks, and conversations into folders in a feature called Teambook.

In general, Chanty’s built-in task manager and intuitive interface makes the chat tool a solid Slack alternative for the less tech savvy. But that being said, if you’re a techie, you can connect Chanty with a ton of apps through Zapier, making the team chat platform more robust.

Chanty’s free plan is limited to 10 people on a team while its paid plans start at $3 per user for each month. 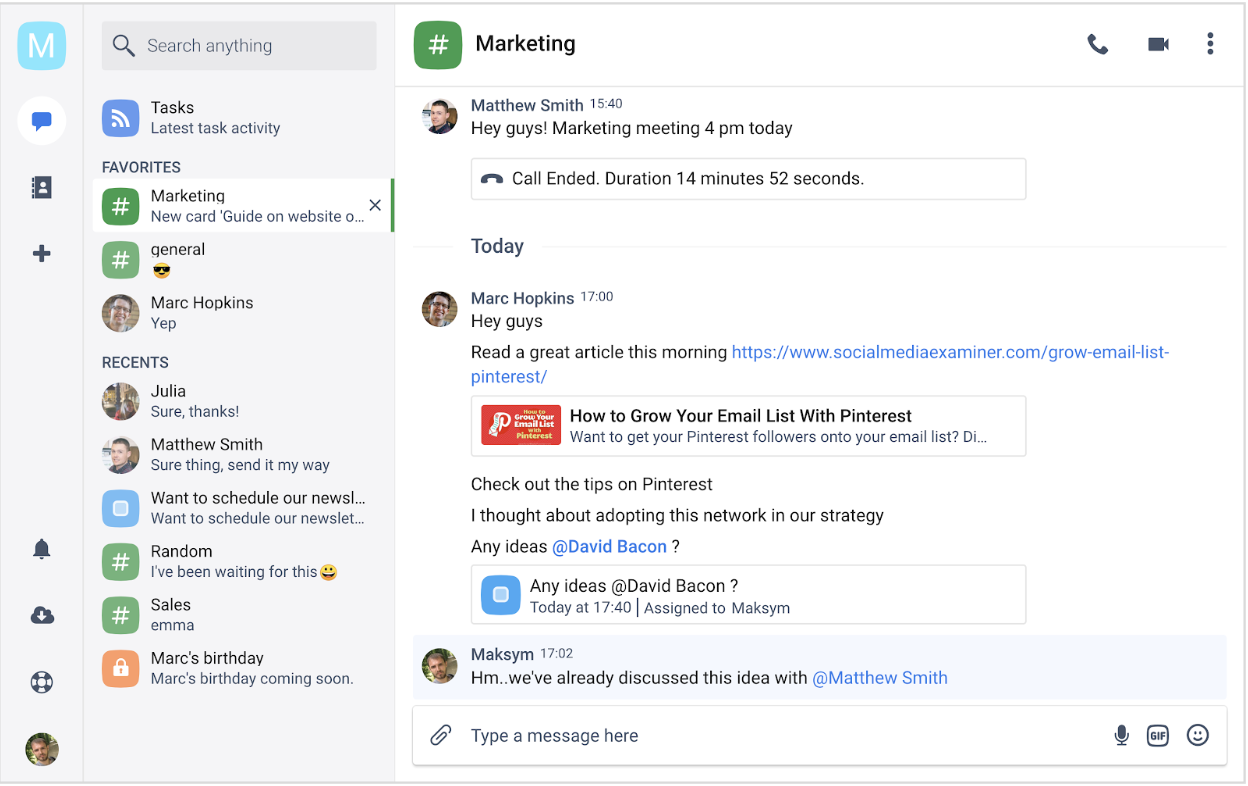 Microsoft Teams is a business chat tool mostly targeted towards enterprise companies. But if you happen to subscribe to one of the Microsoft Office 365 plans, which are Business Essentials or Business Premium, you’ll already have access to Microsoft Teams.

If you don’t have one these plans, though, you can start with the freemium version of the tool. It includes all the essential team chat features like instant chats, audio/video calls, and integrations. It also offers integrations across all Office 365 products and more than 180 custom apps. If you have a large remote team, you’ll enjoy Microsoft Teams’ voice and video calls that can host up to 80 people.

The Business Essentials plan starts at $5 per user for each month while the Business Premium plan is $12.50 per seat. It’s also important to note that Microsoft Teams is not the easiest app to deploy, so make sure your team admin is tech-savvy.

RocketChat is a free, open-source Slack alternative that lets you tailor its look and feel to your own requirements. One of RocketChat’s best features is that it’s easy to migrate to -- all you need to do is export your files from Slack or HipChat and upload them to RocketChat. If you experience issues deploying or maintaining RocketChat, you can request extra tech support, starting at $525 per month.

Even though RocketChat may sound like it’s designed specifically for techies, it’s actually not. The team chat tool offers a cloud solution that has the same functionality as Slack, starting from $50 per team for each month. RocketChat also has useful features like real-time translation, live chat client, and E2E encryption, making it a Slack alternative that’s definitely worth a look. 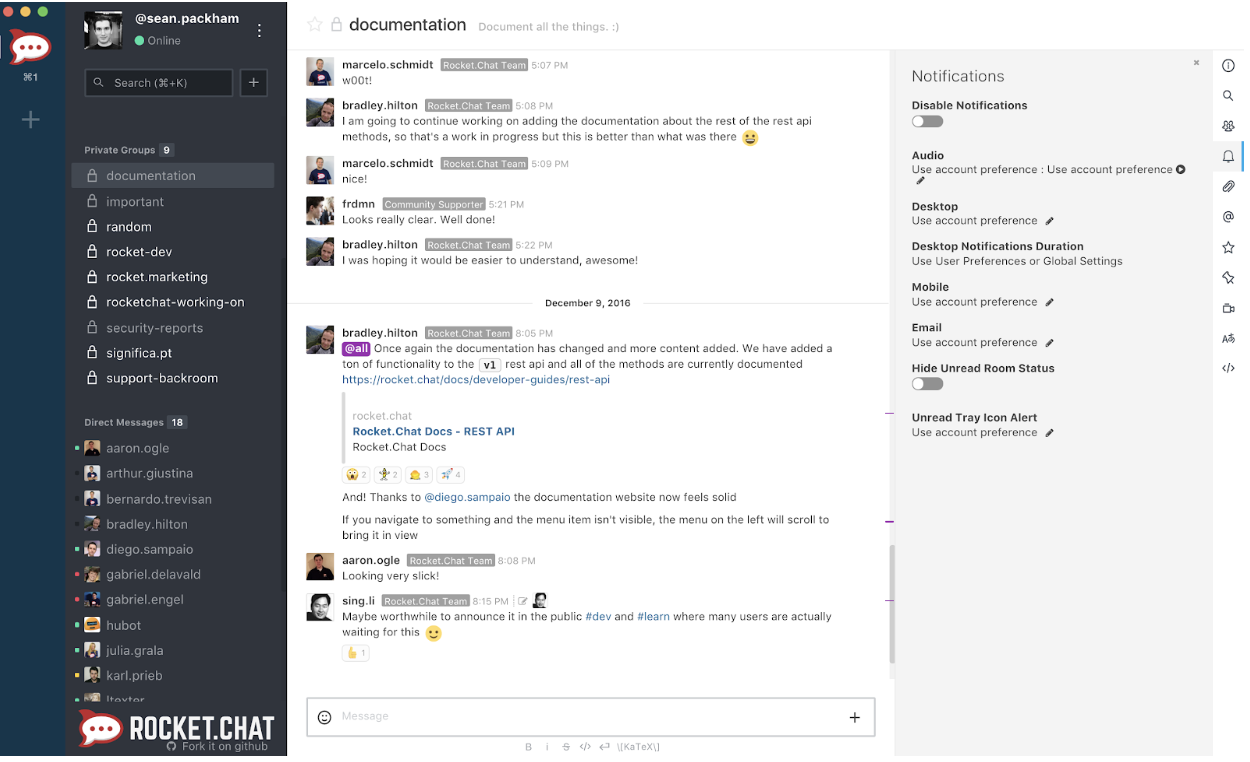 Discord is actually an industry-leading team communication app for gamers. But thanks to its rich functionality and unlimited message history, many people make good use of it for their teams at work.

When you first start using Discord, the app divides your channels by text and voice. But you can easily implement the concept of Slack’s private and public channels using Discord’s channel settings. It’s also the only app in this list that offers push-to-talk features.

Keep in mind, though, Discord doesn’t offer integrations with apps you might use at work, like most team chat tools on this list. But if you need a free space to communicate via text, voice, or video, Discord could be a good option for you. 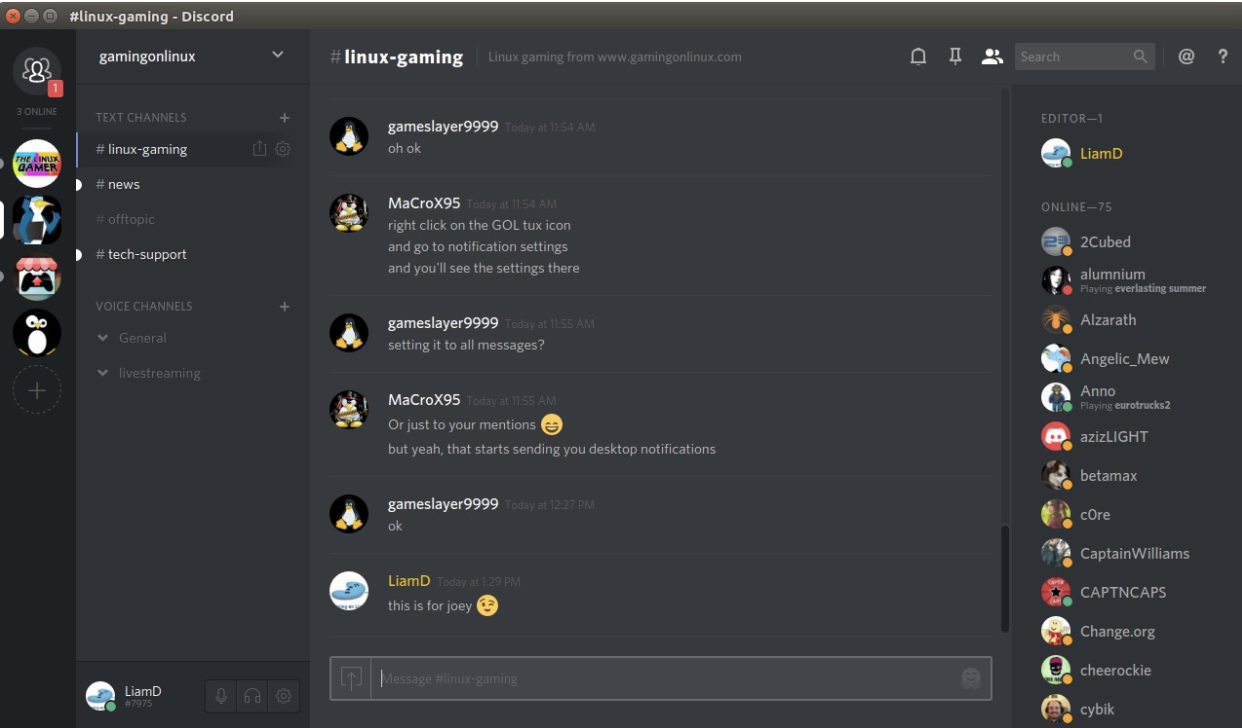 Mattermost is a private cloud, open-source communication tool, which means you need to deploy it on your own company’s server. But it’s also a highly customizable solution that lets you rewrite its initial code to meet your company’s needs.

Even though Mattermost mostly targets the enterprise sector, it still offers freemium pricing plans for small teams that feature unlimited message history and integrations. Paid plans include more enterprise essentials like better privacy, security, and customization options, starting at $39 per user for each year. Additionally, Mattermost supports more than a dozen languages, making a great fit for global teams.

Flock is a workplace chat software that claims to run faster than Slack. In addition to regular communication features like instant chat, audio, and video calls, it also offers built-in polls, reminders, notes, and code snippets. 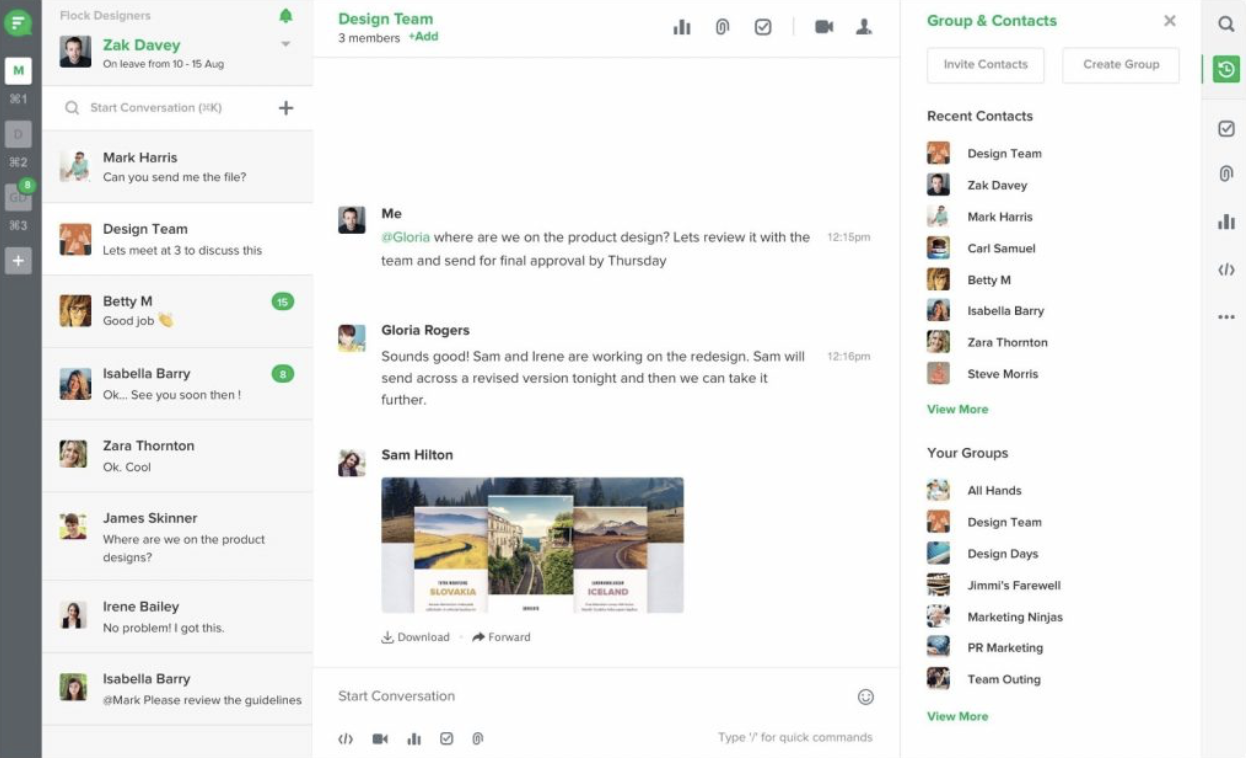 Ryver is a team communication tool known for its Trello-like built-in task manager, allowing you to turn messages into tasks and manage them with Kanban boards.

Similar to Slack, Ryver lets you communicate through open forums, private groups, and direct messages. It also makes voice and video calls for up to 400 people available through a native integration with the FreeConference app. And if you have a Zapier account, you can also connect Ryver to your favorite apps.

In terms of price, the team chat tool is free for up to six users. For larger teams, prices start at $49 per month for up to 12 users or $99 per month for unlimited users. Both plans come with a 14-day free trial.

Glip is a team collaboration tool developed by RingCentral. While Slack has configurable features, making it a one-size-fits-all team chat app, Glip has built-in features like tasks, calendar and notes.

The team chat app also differs from Slack because you need to download the RingCentral app to make video and audio calls, which is a built-in feature on Slack. But you can connect Glip to other apps through Zapier or one of its more than 20 custom integrations.

Glip’s freemium version is limited to 500 minutes of shared video chat while their universal paid plan -- which is $5 per user per month -- offers 24/7 priority support and more admin and privacy controls. 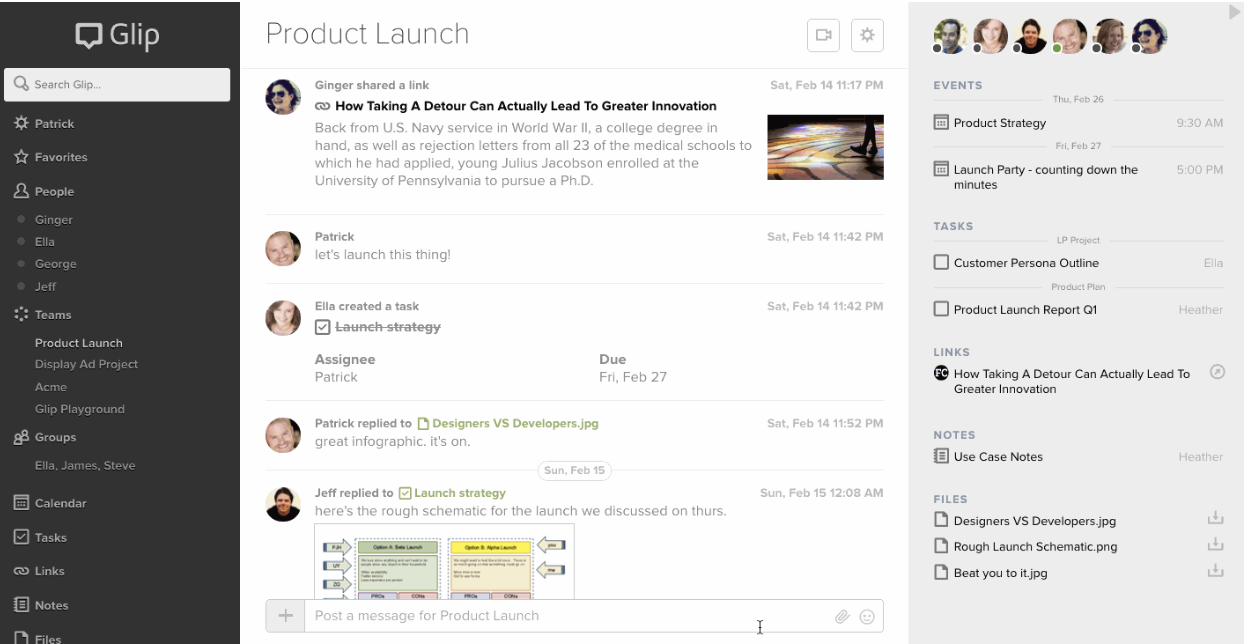 Flowdock is a Slack alternative that organizes conversation by threads. Their threads are color-coded so you can easily navigate between topics and organize your team’s communication.

Similar to Slack, Flowdock features open, invite only, and one-to-one chats. The app is also free for up to five people on a team. Additionally, video calls, just like in Flock, are available through the appeair.in integration, and you can connect Flowdock to more than 100 of your favorite apps.

If your team has more than five people, the team chat app’s prices start at $3 per user for each month, which includes a 30-day free trial. 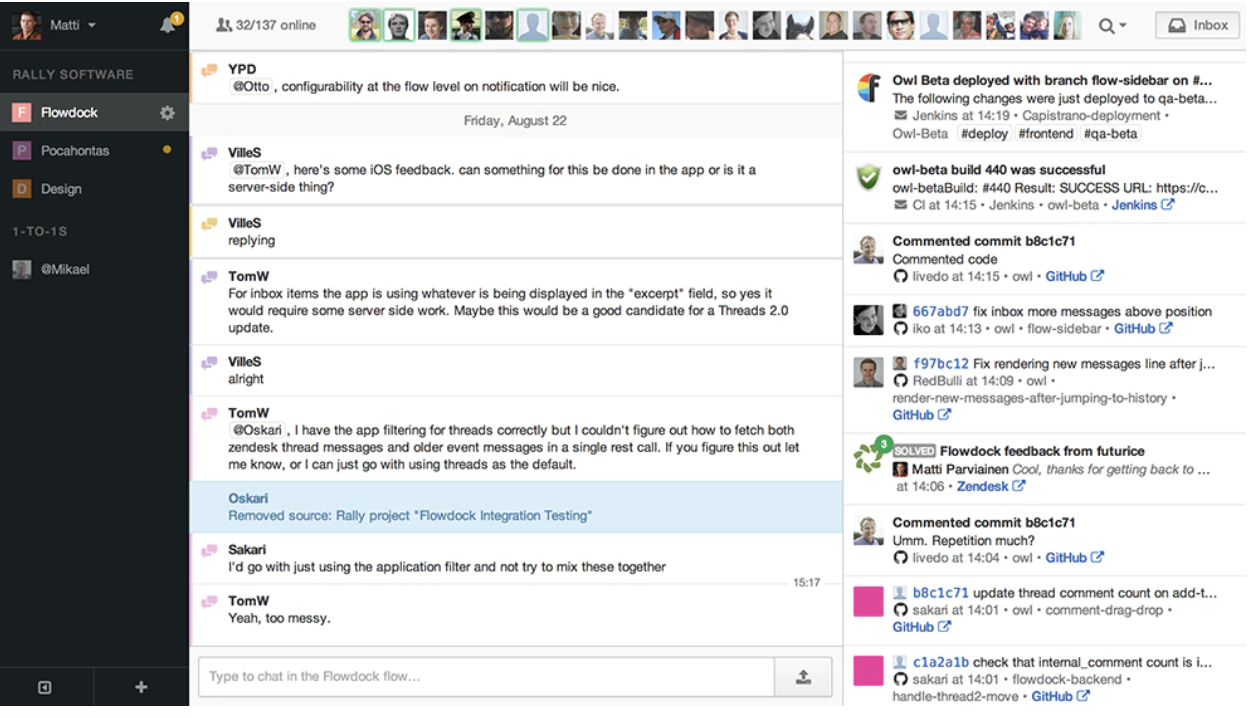 Luckily, when it comes to choosing the right communication tool for your team, you have a variety of options. I’ve briefly covered the best apps your team might enjoy, but if you need more in-depth information on team chat tools like Slack, check out Chanty’s Slack alternatives review. It shares Chanty's experience and feedback from testing seven different team chat software during a span of eight weeks.

Olga Mykhoparkina is the Chief Marketing Officer at Chanty, a team messaging platform and customer of HubSpot.

The 24 Best Motivational Speeches Our Employees Have Ever Heard

How to Adapt Your Communication Style to Every Type of Colleague