15 Pearls of Wisdom From the Legendary David Ogilvy [SlideShare] 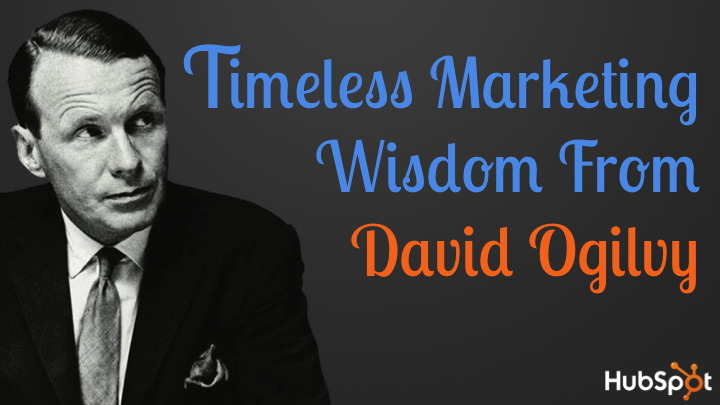 Let's face it -- it's really easy to have Shiny Object Syndrome in marketing today. With such a rapidly changing industry, we're always trying to stay up on the latest and greatest. "New tools! New social networks! New audiences! Gotta try them all!"

But sometimes, it's helpful to step back and remember that some marketing advice is timeless. Tools change, methodologies develop, but there are some core marketing truths that can stand the test of time. And sometimes, one person can be the source of a ton of timeless marketing advice.

Today we wanted to highlight one such person: David Ogilvy. Widely considered the Father of Advertising, Ogilvy was the founder of Ogilvy & Mather Worldwide and a prolific writer. Even though his books were published decades ago, his advice is still applicable today. So we rounded up his best advice for marketers to help inspire you on this dreadful Thursday morning. Here's what Ogilvy has to say:

1) “I don’t know the rules of grammar … If you’re trying to persuade people to do something, or buy something, it seems to me you should use their language, the language they use every day, the language in which they think. We try to write in the vernacular.” (Tweet This Quote)

3) “Never write an advertisement which you wouldn’t want your family to read. You wouldn’t tell lies to your own wife. Don’t tell them to mine.” (Tweet This Quote)

4) “Do not address your readers as though they were gathered together in a stadium. When people read your copy, they are alone. Pretend you are writing to each of them a letter on behalf of your client.” (Tweet This Quote)

5) “Consumers [decide] to buy or not to buy [based on] the content of your advertising, not its form.” (Tweet This Quote)

6) “On the average, five times as many people read the headline as read the body copy. When you have written your headline, you have spent eighty cents out of your dollar.” (Tweet This Quote)

7) “The best ideas come as jokes. Make your thinking as funny as possible.” (Tweet This Quote)

8) “Good copy can’t be written with tongue in cheek, written just for a living. You’ve got to believe in the product.” (Tweet This Quote)

9) “Advertising people who ignore research are as dangerous as generals who ignore decodes of enemy signals.” (Tweet This Quote)

10) “Never stop testing, and your advertising will never stop improving.” (Tweet This Quote)

11) “Why should a manufacturer bet his money, perhaps the future of his company, on your instinct?” (Tweet This Quote)

12) “Hire people who are better than you are, then leave them to get on with it. Look for people who will aim for the remarkable, who will not settle for the routine.” (Tweet This Quote)

13) “Training should not be confined to trainees. It should be a continuous process, and should include the entire professional staff of the agency. The more our people learn, the more useful they can be to our clients.” (Tweet This Quote)

15) “Don’t bunt. Aim out of the ball park. Aim for the company of immortals.” (Tweet This Quote)

Which piece of Ogilvy's advice resonated with you the most? Share your favorites with us in the comments.