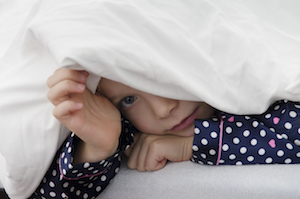 There aren't many things more nerve-wracking than walking into a room of people you desperately want to impress, and then getting questioned about (and ultimately judged on) your career choices, goals, strengths, weaknesses, and overall personality.

And, as if that weren't bad enough, what if you've totally sweat through your shirt and it's visible to everyone? Or your heel broke on the way to the office? Or you accidentally ordered the messiest dish on the menu?

Thanks a lot, Murphy's Law.

We all have an embarrassing story or two from our job interviews, but some are definitely worse than others.

We surveyed professionals about job interviews gone wrong for this article. After laughing a lot -- and cringing a lot, too -- we chose some of our favorites stories to share with you in this post. (Names and identifying details have been changed.)

"I was interviewing for a pretty senior level position at a formal company, so I wore a suit. I went to the bathroom before the interview, and while I was pulling the zipper up, it broke. I started freaking out, looking for a pin or something to hold it closed. I found nothing and worked myself up into a pretty big sweat. I walked into the interview red in the face, sweaty, and with an open fly, which I tried to awkwardly conceal by folding my suit jacket over my arm, shielding the view of my pants. They must not have noticed because I got the job! (And also got my pants fixed.)"

"In a final round of interviews with a large company, the women in HR who I had been speaking with for the majority of the process invited me into her office to see how my meetings with the hiring managers went. As she started to walk toward me, she began to put her arm up, signaling as if she was about to give me a small nice-to-see-you hug (we had gotten to know each other over the recent weeks). To reciprocate, I started to motion a hug back, until I noticed she was only trying to shut the door behind me. It was extremely awkward. She didn't call me back afterward."

"Once I went to an interview ... and realized mid-way through it was a date. (Enough said.)"

"I was interviewing for a copywriting job at a fashion company. At that point in my life, I was not making very much money at all. (As in, I ate leftovers from my office's fridge when rent was due at the end of the month.) In my interview with the fashion company, they asked me what kinds of stores I like to shop at -- and the truth was that I shopped at cheap department stores because that's all I could afford at the time. I debated being honest and saying that, but knowing that could jeopardize my chances of getting the job, I ultimately decided to try to lie my way into an acceptable answer. But ... then they asked me follow-up questions about each store I named, none of which I'd ever stepped foot into. I fumbled, the interview ended several minutes later, and I didn't hear from them again."

"My senior year of college, I traveled to New York for interviews with an agency through Career Services at my school. My first indication that something was wrong was when no one at the company could tell me when to book my return train, even though my first interview was scheduled for 11:00 a.m. Then, I found out that everyone I spoke to -- six or so people -- had been there for less than three months, and it was a very small company (15-20 people).

"Next, I got the 'let’s leave the interviewee in the conference room and see what happens' move. After about five minutes, I stuck my head out and had to go down the hall to find someone, since my next interviewer was nowhere to be seen. I finally found someone -- a new guy who was super apologetic -- he found the person who was supposed to be interviewing me, who was just hanging out waiting for me to be proactive. Finally, I interviewed with the CEO. I walked into the interview and right off the bat, and he started mocking my 'little Ivy League suit.' But everyone in the office was wearing a suit ... and they had been recruiting at my school!

"From there, it only went downhill. After condescendingly mocking my appearance, he went on to make personal attacks about my family, my previous professional experience, and even my academic choices. It was bizarre and, frankly, psychotic. I walked out almost in tears, but sent follow-up emails to everyone else I interviewed with that day. I got an email back really late on a Friday night from one of the guys who interviewed me, apologizing for the CEO's behavior and saying he’d be happy to help me get a job elsewhere (since apparently he 'can be hard on people').

"I ended up withdrawing my candidacy since I couldn't imagine being a subordinate of someone who was that controlling and awful (because I could only imagine how he treated his employees -- if his interview behavior was any indicator). When I withdrew my application I made it very clear that it was due to the behavior of the CEO. He responded saying "Thank you for your message, albeit perplexed as to what you could be referring to. I wish you all the best in your future endeavors!"

"I once interviewed for a VP-level position, and the hiring manager asked me to describe each position I held, from first to most recent. I spent only a few seconds detailing my first internship, which I held more than 15 years earlier. Not so fast. He insisted I'd moved on too quickly, and he wanted me to spend more time explaining what I did as an intern. So I took out my resume and read it to him word for word to emphasize the pointlessness of his unweighted process."

"Probably the worst interview experience I've ever had was at a callback interview. I was meeting with four people, each for 30 minutes. This was my third callback of the week, so I was pretty tired the morning of the interview -- and since it was super early in the morning, I went to Panera to get an iced tea before the interview started. I was also kind of starting to lose my voice, so I accepted the water they offered me when I arrived at the office.

"After consuming all these liquids, by the time I sat down for my third interview but after we had already begun talking, I realized I really had to pee. I don't even remember what I said to the interviewer because I was so focused on not peeing my pants. I was bright red, sweating, and kept uncrossing and recrossing my legs. As soon as the 30 minutes were over (thank goodness I made it without a disaster), I immediately asked to use the restroom before my last interview began. It was probably really obvious I had to pee the whole time since I definitely didn't look so hot. I didn't get an offer."

"I once interviewed for a marketing manager position at a company that sells outdoor gear. In keeping with the outdoor theme, I opted to ride my bike to the interview. I got there super early and decided to kill some time reading by the water. I put my bike on its kickstand next to me and hung my helmet on the handlebar. It was SUPER windy that day, and in a total freak occurrence, the wind blew my bike down and my helmet fell into the water! It was like a 20-foot drop down to the water, so there was no retrieving it. The first thing the hiring manager asked when I walked into the store was, 'You don't wear a helmet?!' I tried to explain what happened but it was so outrageous that it sounded like a lie."

"I was interviewing to become an undergraduate professor at a very traditional, prestigious university. I got there about 25 minutes early so I could look for parking, go to the bathroom, and maybe even get some coffee. It was 7:30 a.m. so nobody was in school yet. I went ahead and bought a small cup of coffee and walked with it towards a table where I could read a newspaper while I waited. Somehow, I spilled half the cup of coffee over my recently bought white blouse.

"I had 25 minutes to fix it, so I sprinted to the bathroom and got some water and soap to get it off. I was halfway through washing it out, leaning over the sink in a very ridiculous position, and a lady came in and asks me if  was all right. I told her about my stupid mistake, and how this was a super traditional school so I had dressed up in my suit and white blouse, and so and so forth -- I kind of babbled all this at her. Once it looked decent enough (after eventually crawling under the hand dryer to make it dry), I was only five minutes early for my interview. I got in and the interviewer was the same lady that I bumped into the bathroom. My face must have clearly shown my embarrassment because she just laughed. I still got the job."

What's your worst interview story? Share with us in the comments below!