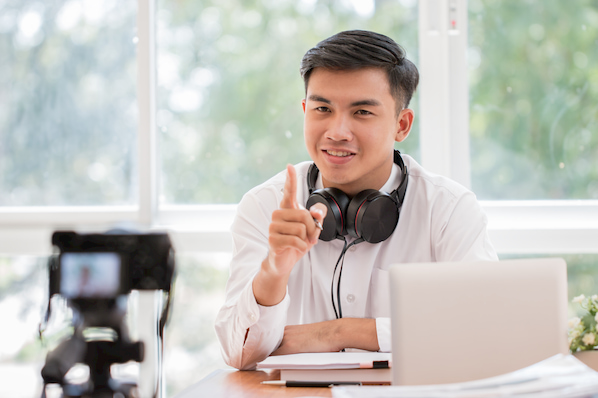 The responses are an interesting statistic, as most may not think to connect the two groups. It’s still worth thinking about, though — how are influencers and salespeople alike?

In this post, we’ll discuss similarities between salespeople and influencers and outline when you should consider using them to meet business goals.

First, we’ll go over brief definitions of salespeople and influencers.

A salesperson, also called a sales representative, is someone whose entire job is to sell products or services. They are employed by a business to sell to consumers or other companies in-person, online, and over the phone.

The term ‘salesperson’ is also sometimes used to describe someone who is very persuasive in getting people to take a specific action, regardless of whether they sit and work for a business as a salesperson.

Influencers are people who, well, influence others to take specific action by promoting or recommending a product or service. Often, an influencer is someone with a significant following of consumers that trust their authority and make purchases based on their recommendations.

Social media has made influencers more commonplace, and they can be anyone from your 15-year-old neighbor live streaming video games on Twitch to your coworker who posts lifestyle content on Instagram.

There are multiple types of influencers, from macro-influencers with millions of followers to nano-influencers with a smaller follower base in a niche, specialized field. Influencers can be bloggers and podcasters or well-known celebrities, journalists, and industry experts.

Overall, the most significant similarity between influencers and salespeople is that they both inspire sales, just in different ways. Below we’ll go in-depth into commonalities between the two groups.

What Brand Influencers & Sales Reps Have In Common

1. If a salesperson is just someone who is persuasive, influencers are salespeople.

As mentioned above, the term salesperson can sometimes be used to describe someone who is exceptionally persuasive, regardless of whether they work in sales. In this sense, influencers are certainly salespeople. They don’t directly work in a sales role but, because of their position, they can convince people to make purchases because they possess some of the qualities and skills of a salesperson.

To sell something, you need to prove that a product will impact someone’s life. Influencers and salespeople appeal to customer pain points, empathize with them, and present a product or service as a solution. In this case, the difference between the two groups is that influencers often prove a product's benefits by using it themselves, while a salesperson might not do the same.

3. Salespeople are permanent, influencers are temporary.

A significant difference between the two is why and how they come to sell products. Salespeople are hired by a business to sell, while influencers are usually under temporary contract and paid accordingly. Thus, salespeople are probably more knowledgeable about a product, whereas influencers may know top-level information but gain additional context from using it themselves. An influencer can make a post, benefit from the partnership, and ultimately move on if they wish to do so.

For example, an influencer can promote exercise equipment for one brand and promote another after the first contract is up. A salesperson wouldn’t do this while employed by one company.

4. Both groups are present at a critical stage of the buyer's journey.

The decision stage of a buyer’s journey is crucial as it is how businesses generate revenue. Closing a deal, whether as a result of a conversation with a salesperson or seeing a post on Instagram, is the ultimate goal.

5. Influencer trust is high, but salespeople have the upper hand on authority.

I mentioned this before, but influencers aren’t salaried employees. Once a contract is over, they could work for a competitor. This could be confusing for customers who are looking to influencers to provide insight into their preferred products.

On the other hand, salespeople focus on one business, and they know everything about the products and services they offer. They’re informed, authoritative representatives that are qualified to answer consumer questions and present satisfying solutions.

6. Influencers appeal to new customer attitudes towards marketing and advertising.

Generation Z is a unique audience, as they shy away from sales-to-drive leads type advertisements in favor of authentic, relatable content (hence the popularity of influencer marketing). Influencers have the upper hand in this scenario, as consumers don’t see their ads as traditional forms of advertising. Influencers create content that isn’t overly commercial, especially when they relate products to pain points and concerns that their followers already have.

Twelve Reasons to Use Influencers and Salespeople

Despite their differences, you shouldn’t get rid of your salespeople to focus on influencers or vice versa. There are different scenarios where each group can benefit your business, and we’ll go over a few of them below.

Leverage Influencers and Salespeople To Meet Your Different Business Goals

All-in-all, salespeople and influencers are similar in that they both persuade consumers to purchase your products and services.

When devising a strategy to meet sales objectives, it’s less of a question of who you should use and more so how you should use them. Weigh their strengths and weaknesses in terms of meeting your goals, and place them in positions where they’ll naturally succeed.

5 Ways Your Sales Team Can Recover Lost Revenue in 2021