How To Beat Decision Fatigue in Business

Beep… beep… beep. Your alarm clock goes off, and you’re faced with your first decision of the day: “Hit the snooze button?” 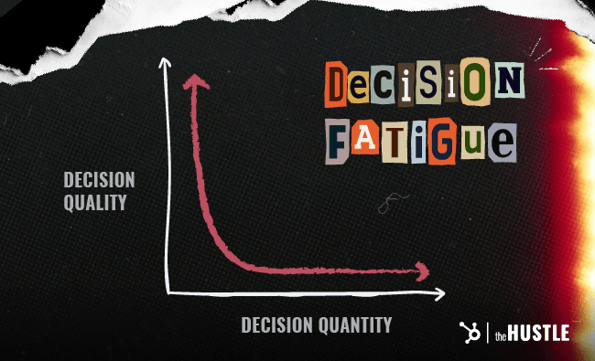 You walk to your closet. Next question: “What should you wear?”

You check your email. “Should you respond now or wait until later?”

These are just your first few minutes upon waking. It’s also the first few choices of thousands you’ll make throughout the day.

On average, most people make 35k decisions each day. And the more decisions you make, the more difficult it is to continue making high-quality decisions. This phenomenon is commonly referred to as decision fatigue.

Decision fatigue can be disruptive for anyone, but for an entrepreneur, it can be the kiss of death.

Most entrepreneurs have a bias for action — which means you’re good at getting stuff done. But a side effect of getting things done is the countless decisions it creates, so it’s crucial to learn how to beat decision fatigue.

What Is Decision Fatigue?

Every decision you make expends mental energy. As the day wears on, and you make more choices, this mental weariness takes a toll. The slow decline of decision quality due to the vast quantity of decisions being made is often referred to as decision fatigue.

Peter Shallard, founder of entrepreneur coaching business Commit Action, defines decision fatigue as “the diminishing quality of your critical thinking skills (and the quality of your decisions) as a result of mental exhaustion.”

According to Shallard, many entrepreneurs struggle with doing too much “mental forecasting,” which is the playing out of scenarios in your mind to anticipate the results (and secondary effects) of a potential decision.

While it can pay off to fully think through a six-figure business deal, agonizing over your lunch choice doesn’t make as much sense. Yet regardless of how critical a decision is, it takes up some of your precious mental real estate.

One of the first signs of decision fatigue is indecision. It can take place when you become so exhausted from making decisions that you stop making decisions altogether — bringing your life or business to a standstill.

Even an imperfect selection can sometimes be better than indecision because you at least get the opportunity to learn from it. Whether you’re launching a startup or building a team, decision avoidance stalls growth.

Another symptom of decision fatigue, and closely related to indecision, is procrastination. This is when you avoid taking action on what you know needs to be done in your business. You might cancel important sales calls or bail on creating a pitch deck, simply because you’re mentally exhausted.

Perhaps one of the most dangerous decision fatigue symptoms is impulsivity. After becoming worn out from making decisions, you can be tempted to throw caution to the wind and make decisions reflexively rather than strategically.

If you can relate to any of these symptoms, try incorporating a decision-making model like the decision tree or the decision matrix. By filtering your decisions through a proven process, it can temporarily take the weight off you and provide a new, unique perspective on your problems.

Many entrepreneurs fall victim to decision fatigue because they have to keep a finger on the pulse of everything, from strategy proposals, to customer support, to hiring new team members.

But rapid context switching can be inefficient and challenging. Studies have shown context switching creates a backlog of stress and reduces performance. When a new task pops up and requires new decisions, our minds are often still partially stuck on the previous project.

If you’re not careful, this might mean walking into a meeting later in the day with little energy, even though it’s an important budget discussion.

Even little decisions can add up for entrepreneurs and create major consequences.

For example, after spending a grueling 10 hours at the office — what decision are you more likely to make for dinner: ordering some takeout or cooking up a healthy meal?

Decision fatigue can also manifest for entrepreneurs through their personal life. Entrepreneurs are typically known for handling situations with confidence and poise, so when friendship or family troubles arise, they may be the first person who is called. This can unintentionally create mental exhaustion that’s carried into the workday.

In any situation, detecting decision fatigue is an important first step in beating it.

The ill effects of decision fatigue are often exacerbated from a sense of ambiguity and poor planning. Rather than making each decision as it comes to you and eventually becoming overwhelmed, it pays to optimize your life and plan some of your decisions upfront. Here are just a few of the many approaches.

Optimize How You Spend Your Time

One of the best places to start being more intentional is with your time.

Katelyn Bourgoin, founder of education and media company Customer Camp, creates a “to-NOT-do” list each quarter that she shares with her virtual assistant. This includes a list of opportunities she is not pursuing, like podcast appearances, building new products, or speaking at conferences. Her VA then uses that filter for each email and DM that is received.

Serial entrepreneur Rob Dyrdek avoids decision fatigue by scheduling every minute of his day, from work tasks to leisure activities. This ensures all of his time is intentionally invested.

If you don’t take care of your physical health, it’ll soon have an effect on your mental health.

Entrepreneurs are notorious for not getting a full eight hours of sleep. Some even point to it as a badge of honor and evidence of their hustle. But according to scientific research, sleep deprivation destroys your decision-making ability and makes you more impulsive.

Sleep serves as nature’s reset button, so quality snooze is one of the best ways to retreat from the fog.

Also try exercising before you start your day. Just 30 minutes of aerobic exercise can improve your cognitive functions and decision making for the rest of the day.

On average, people receive around 60 push notifications throughout the day. These pop-ups are adding to a tiny “to-do” list in the back of your mind. And due to the Zeigarnik Effect — a phenomenon that says people remember interruptions better than other moments — our brain is attracted to interruptions and open loops.

For an entrepreneur, avoiding decision fatigue altogether is practically impossible. Besides, decision making is part of what makes being an entrepreneur so exciting. But as your decision volume increases, whether it’s due to your business or personal life, it’s important to prepare appropriately and not sacrifice your mental health in the process.