The competition for marketing and technical talent is only increasingly as agencies battle startups, brands, publishers, and a host of other industries when recruiting.

Even more concerning is the turnover rate in the industry, which has increased by 10% in the past year and is growing faster than other industries according to the 4A's.

Agencies want to attract the attention of the most highly sought-after employees, so they've had to get creative in their recruiting efforts. Check out these examples from agencies across the globe.

1) Snapping Up the Competition

Earlier this month, 180LA launched a Snapchat campaign to find a new social media manager. It used the social platform's geofilters to target employees at agencies R/GA, 72andSunny, Deutsch, Pereira & O'Dell, and Goodby Silverstein & Partners. It also targeted those working at Facebook, Google, and BuzzFeed in Los Angeles. 180LA's Snapchat Stories for the campaign featured office tours, details on open positions, and instructions for applying. The results? The agency saw 40 candidates express interest in the position in the first 10 hours. 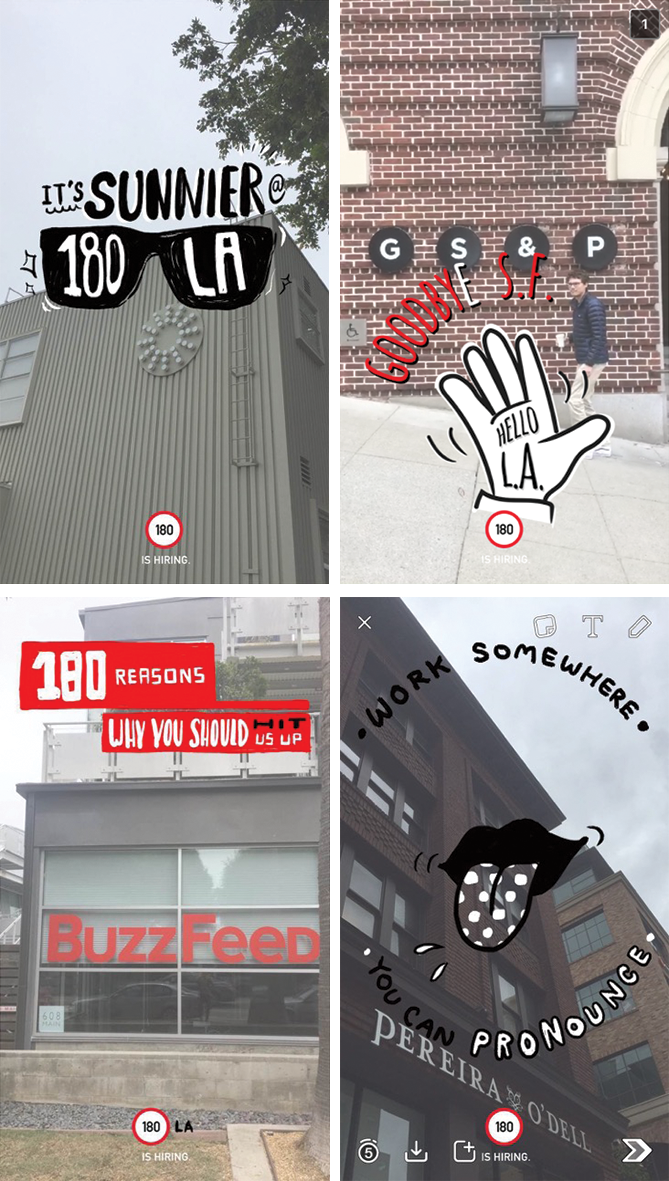 To find a new art director, Y&R Prague partnered with stock photo website Dreamstime to replace the watermarks on images with "Now Hiring," "Y&R Prague," and contact information for applying for the job

Smell is a powerful motivator -- though it's not usually a consideration when you are vetting potential employers. For a recruiting stunt to attract college students, Mother New York "captured" the aroma of its office and created a candle so job fair attendees could experience office life. 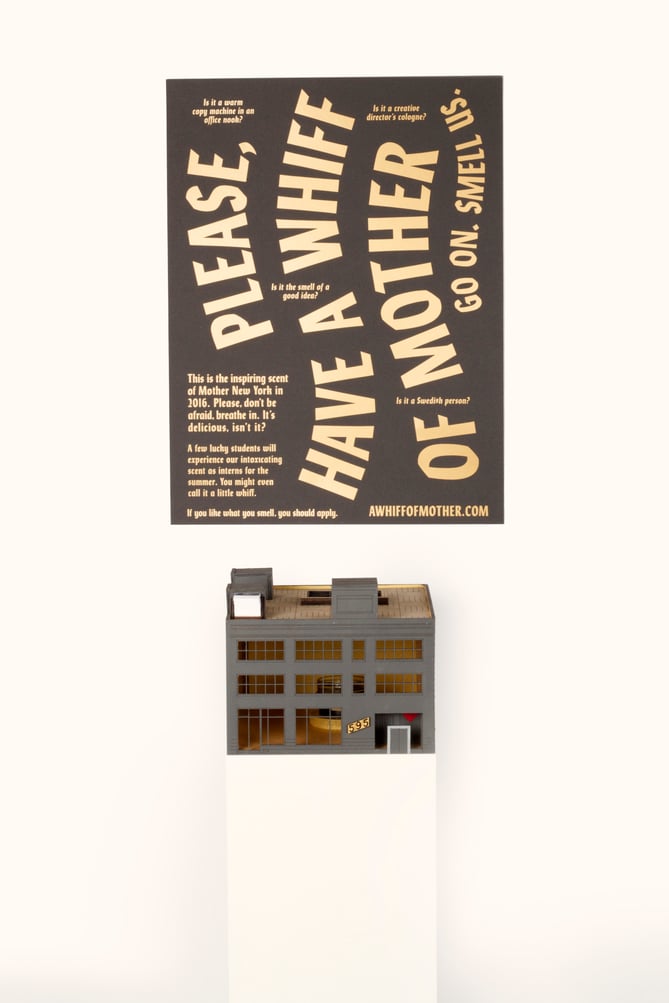 The Minneapolis-based agency toured college campuses earlier this year and showed off its office with a miniature version of its space. The mini conference rooms and collaborative spaces were housed under a tent, where Solve employees gave out five-minute job assignments to college students. 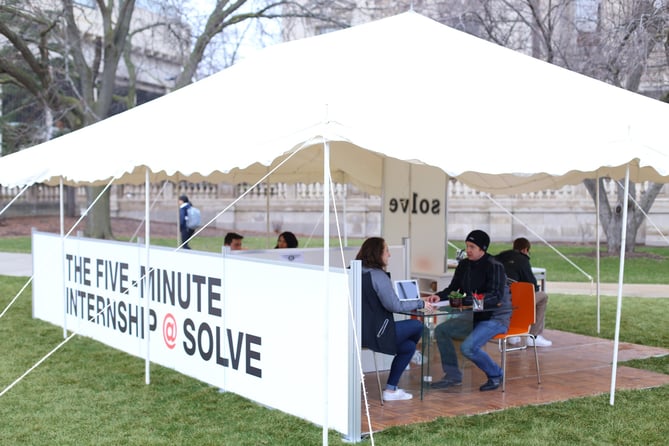 5) Swipe Right for a Job

To find its next intern, mobile agency Fetch created a Tinder profile and matched with people in New York, asking users to send them their best pick-up line. The agency ended up hiring Sam Weidt who said he "knew my natural talent with marketing was more present than my natural talent with dating." The agency ended up matching with 270 candidates and many more who were a bit confused and disappointed in what the agency wanted in a relationship. 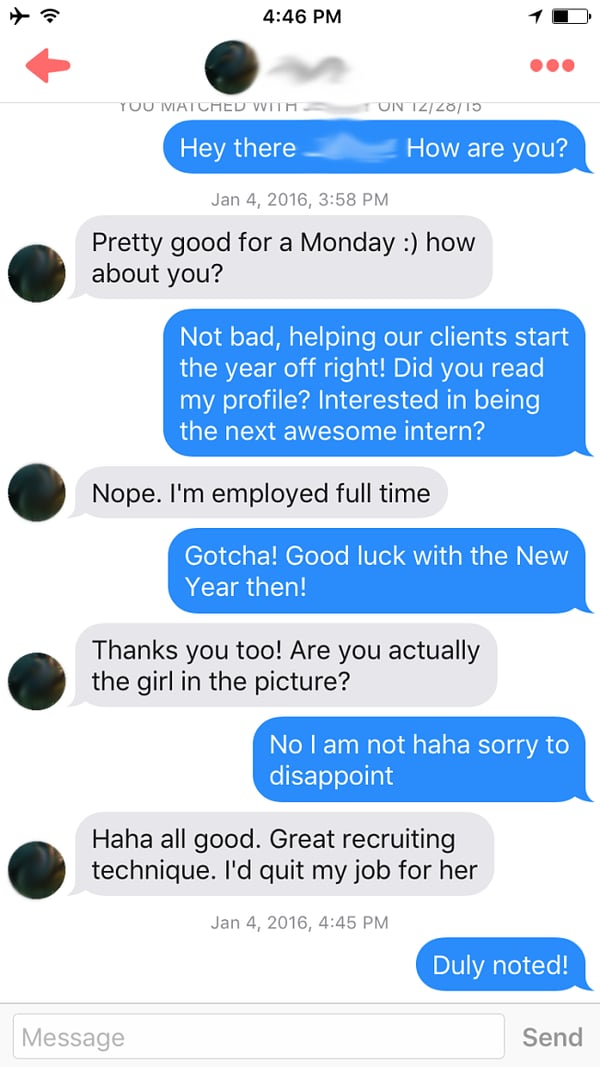 For this year's SXSW event, MEC created three virtual reality films that showed off its office space, the sights around its New York-based location, its creative work, and what it's really like to work at the agency. It's hoping to attract people outside of the advertising industry with a VR view into the daily life of an agency employee. The agency purchased a 360-degree camera to record the films, which are best viewed using Google Cardboard.

7) Hashtag for an Internship

Droga5 was looking for a young student for a summer design internship who knew how to think visually, so it launched a recruiting campaign on Instagram earlier this year. For two days, people could enter the intern competition by uploading an image that used the colors blue and orange to show what they do when they get stuck creatively. The agency asked interested candidates to use the #D5Extra hashtag and include a link to their portfolio in their submission.

We cannot wait to welcome our summer #D5Interns to the agency in a couple of weeks. Find out who made it on internwith.us (link in bio).

8) A Call for Judges

In 2015, 180LA was looking for a stellar creative director -- the type of experienced professional who is asked to judge other creatives' work. So it sent its recruitment ad to where it would be seen by the best creative directors in the business and where they would have to actually watch the ad. The agency submitted a fake case study in four Cannes Lions categories, detailing how great it would be to work in its offices.

9) Gaming for a Developer

In 2011, the Danish design agency partnered with top online game players who promoted the Uncle Grey's front-end developer position within the game by distributing posters and sharing the application URL.

How to Use Inbound Recruiting to Source, Interview & Hire Top Talent

How to Hire (and Retain) the Right Talent for Your Agency