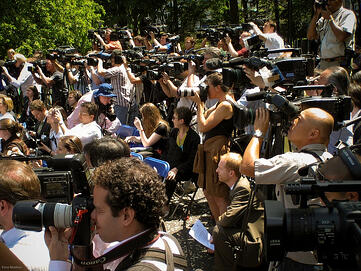 Sure, you may get a lot of your news from social media. But you can also use social media to spread your own news and maybe even generate some media attention of your own.

It won’t happen overnight, and it’s not guaranteed that if you tweet at a reporter, he or she will cover your story. But there are a few best practices you can follow that will increase your chances. Here are five tips for getting media coverage using social media.

1. Pay attention to what journalists are posting. Do they respond to comments? Answer questions? Get yourself into that conversation, but don’t do it by pitching them with your first tweet or Facebook comment. Instead, grow your relationship. If they have shared an article or video and you know of some piece of information that could add to that conversation or experience, share it.

2. Reporters are just like you and me. Treat them that way. Just because you may see them on television every morning or read their byline in the paper doesn’t mean they’re not human. They have feelings, too. So when you’re sharing that news tip, don’t do it in a condescending way. Instead, offer it as a, “Hey! Thought you may be interested in this...”

3. Once you’ve established a relationship with a reporter or editor, pitch them – gently. Don’t bombard them with tweets, Facebook messages, or LinkedIn messages about your news release or your upcoming event. Don’t ask them every three hours if they’ll be attending. Simply use social media the way you would a phone. Ping once -- maybe twice -- but don’t pester.

4. Thank reporters who cover your event, and do it publicly and preferably with a link to the coverage. Reporters love when their pieces get attention. Like I said, they’re just like you and me, and just like all of us, they have a little bit of a healthy ego. A simple Facebook post on their wall or a tweet saying, “Thanks, @(name) for the coverage of XYZ’s event. Check it out: (LINK)” should do it.

5. Maintain that relationship. Once the relationship is established, it’s easier and more likely you’ll get additional coverage. But again, don’t bombard them. You may not end up on the front page of the paper or land the top story on the news right away, but keep in mind that all national news comes from local news. Slowly, you will gain more credibility. Eventually, you might even grace the front cover of that coveted magazine.

What other media relations tips have you learned from interacting with journalists and reporters in social media?