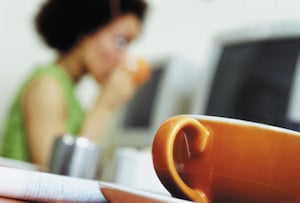 I’m calling you out, my fellow content creators. Just admit it: 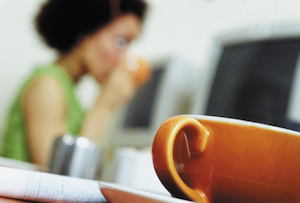 When they induct you into the Content Hall of Fame, there will be a big, fat asterisk next to your name, indicating that you were suspected of using (dramatic pause) performance-enhancing drugs (gasp!).

But don’t worry my friends, you’ll be in good company. You see, I’m just as guilty as you are … probably guiltier. I use a performance-enhancing drug every single day, multiple hours a day. And best (or worst) of all, my office gives this drug out to everyone -- for free!

By now, you’ve probably guessed what drug I’m talking about. And that drug, of course, is caffeine.

Caffeine, true story, is a drug. We just don’t really think about it as one or treat it like one. We doll it up with whip cream and sugar and cocoa powder and other nonsense, put it in fancy containers, and give it weird, Italian-sounding names (who ordered the Supermochacinno?). Then we guzzle it down and spend the next hour or so with our brains buzzing and hearts racing, all for the sake of GSD: getting sh*t done.

As a content creator, I feel that the multiple cups of dark, black, sludge-like coffee I enjoy daily actually help me be more productive. When I’m staring down the dreaded blink, blink, blink of a cursor on a blank screen, there’s nothing like a cup of joe (with a shot of espresso dropped in, of course) to help me get the creative juices flowing.

But from a scientific standpoint, does consuming caffeine actually increase creativity and/or productivity, or is it all just an illusion? And what about other substances that are commonly linked to creativity, like alcohol, nicotine, and marijuana? (Yep, for our friends in areas of the world where the latter is legal, we've got data for you.)

Follow along with me, Dr. Devaney*, as I explore whether or not we truly can create better content through chemicals.

*I’m not a medical doctor … or any type of doctor, for that matter. But I was a lifeguard for three years during high school, does that count? (OK, nope, I’m being told that doesn’t count.)

It’s a common misconception that caffeine is a stimulant. After all, when you drink caffeine, it perks you right up, right? But unlike true stimulants, like amphetamine (a.k.a. Adderall), caffeine doesn’t so much wake you up as it does prevent you from falling asleep.

The stimulating effect of caffeine comes from the blocking of certain receptors in the brain, which would otherwise be occupied by adenosine, a chemical that promotes sleep. When you drink caffeine, you’re effectively sticking a block under your brain’s brake pedal, making it impossible for your brain to slow down.

Want a more scientific explanation of how caffeine works? Just check out this video:

So, now that we have a better understanding of how caffeine works, let’s take a look at what it actually does.

According to a 2010 study, caffeine has several beneficial effects, including -- surprise, surprise -- increasing energy/decreasing fatigue. But when it comes to improving the content creation process, the following caffeine benefits sound quite promising:

Sooo it sounds like caffeine is like that drug from the movie Limitless: One sip, and you’re a freakin’ genius! Or so it would seem …

As Maria Konnikova recently noted in The New Yorker, the concentration and focus we get from caffeine comes at a cost, and that cost is creative thinking.

As it turns out, when we’re wired on caffeine and intensely focused on a project, we’re less likely to link together abstract ideas. According to Konnikova, "a wandering, unfocussed mind” is actually beneficial when it comes to being creative.

"… a break in intense concentration may increase unconscious associative processing," she writes. "That, in turn, allows us to perceive connections that we would otherwise miss."

Alcohol, on the other hand, may offer a solution.

Once in your system, alcohol hops aboard your blood vessels and gets transported to all parts of your body ... including your brain. And that's where the "fun" begins.

Once in your brain, alcohol starts messing with your neurons, which are the cells responsible for transmitting nerve signals. Without going into too much detail, the end result is that your brain isn't able to process information as quickly, which results in a mental slowdown of sorts.

But as an added bonus, alcohol also increases the amount of dopamine in your brain's reward center. So even though you're effectively making yourself dumber as you drink, you couldn't possibly be happier!

From a performance-enhancement perspective, alcohol doesn't look too promising. However, there is one side effect of alcohol that has been helping creative types for thousands of years: reduced inhibitions.

Ever start writing a blog post and then get hung up on a certain word or phrase? Perhaps you're so focused on making something sound great, that it ends up taking you forever. Enter the amazing, inhibition-reducing power of alcohol.

Instead of fretting over proper syntax, with alcohol, your brain effectively tells you, "Nah, everything's good. Just keep on writing, Shakespeare!" And while a little caffeine may help you polish things up afterwards, alcohol can help you get all of your initial thoughts down on paper.

For a better look at how alcohol and caffeine affect the brain in different ways, check out this amazing infographic from the "I Love Coffee" blog:

Based on the different effects that alcohol and caffeine have on the brain, the conclusion of this infographic makes total sense: While a beer will help your mind wander, thus facilitating creative thinking, a coffee will boost your energy and help you focus, thus making it easier to execute on an idea.

Nicotine, an active ingredient in tobacco, is an unusual drug in the sense that it can act both as a stimulant and as a sedative.

Immediately following nicotine consumption, the drug stimulates the adrenal glands causing a rush of adrenaline. This, in turn, boosts your heart rate, increases blood pressure, and -- more generally -- wakes you up.

At the same time, however, we know that nicotine relaxes people (just ask someone who smokes what impact a cigarette has on their stress level). This is perhaps linked to the release of dopamine that nicotine induces, albeit indirectly.

So, can consuming nicotine help you be more creative and/or productive? According to the Encyclopedia of Creativity, there isn't a strong case for the former: "... a recent, exhaustive review of tobacco research did not find significant cognitive benefits from tobacco use, and two recent studies involving nicotine's effect on creativity found the relationship to be inconsequential."

However, nicotine has been linked to improving memory and increasing the speed with which the brain can process information. And more recent research suggests that nicotine -- when isolated from other chemicals found in tobacco -- is actually one of the best cognitive enhancers around, and can even be helpful in treating Parkinson's and Alzheimer's.

The bottom-line: Smoking tobacco is bad for your health, but the nicotine inside could potentially give your brain a boost.

Note: Unless you have a permit for medical marijuana, or live in Colorado or Washington, you're not allowed to read this section. ;)

Marijuana (a.k.a. cannabis a.k.a. weed a.k.a. pot) has been at the forefront of an ongoing debate in this U.S. But instead of examining the arguments for or against its use, I'm simply going to focus on the drug's effects in an attempt to answer the question, "Can marijuana help you be more creative and/or productive?"

For starters, let's take a quick look at how marijuana works. The symptoms commonly associated with marijuana -- euphoria, relaxation, and amplified visual and auditory sensations -- are the result of the drug's interactions with cannabinoid receptors in the brain. These receptors are usually occupied by the chemical anandamide, which occurs naturally in the body and helps regulate cognition, emotion, pain, memory, and appetite.

Unfortunately, the studies surrounding marijuana's effect on creativity and productivity are mostly inconclusive. As digital marketing agency Nebo discovered, a 2010 study showed that marijuana increases "hyper-priming," or "your ability to make connections between seemingly unrelated concepts." However, a follow-up study from the same year argued that the proposed creative benefits of marijuana aren't statistically sound.

When it comes to being more productive, the evidence suggests that marijuana isn't going to help you much. Unlike coffee, marijuana hasn't been shown to increase energy, but is instead more closely linked to making people feel relaxed. But again, this is all just conjecture: There's no definitive study proving marijuana's effectiveness one way or the other.

If I had to make a judgment call here, I'd argue that -- like alcohol -- marijuana can probably be helpful for coming up with ideas. But ultimately, it relaxes you, so don't expect to get a ton of actual work done.

According to Steve Jobs (who made the following statement during a background check in 1988), my assessment is correct: "The best way I would describe the effect of the marijuana and the hashish is that it would make me relaxed and creative."

So, there you have it: four drugs, four different effects. To recap, caffeine was found to be helpful for executing ideas, but may actually hinder your ability to think creatively. Alcohol has the complete opposite effect: It helps you think creatively but hinders your ability to execute effectively. The jury is still out on nicotine and marijuana, but anecdotally, the former seems more closely linked to productivity, while the latter seems more closely linked to creativity.

Want to improve your content without the help of performance-enhancing drugs? Check out our Content Marketing Hacks guide below.