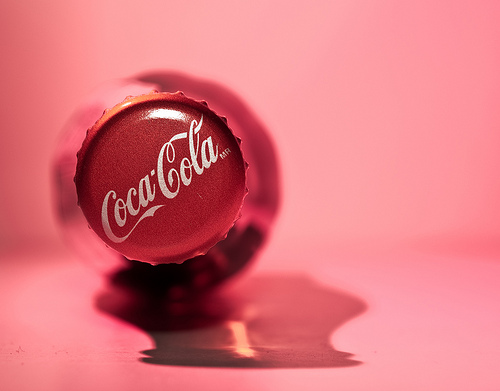 Yesterday, the architect behind Coca-Cola's content strategy, Jonathan Mildenhall, took the keynote stage at Content Marketing World and brought both smiles and tears to all our eyes.

Why? Because he told an epic series of stories. And he told these stories, by sharing stories, in order to teach how to tell stories. (Whoa, meta, right?)

But when all was said and done, after Mildenhall delivered his keynote, the same questions we hear time and time again came up.

"How do I create that kind of content without Coca-Cola's budget?"

We get it. We've heard it. So let's address it. This post will highlight the big hit campaigns Coca-Cola launched this year, explain the methodology behind it (courtesy of Mildenhall's keynote), and provide some ways to actually launch campaigns that can drive similar results, minus the dolla dolla billz.

Coca-Cola believes in creating ideas so contagious they can't be controlled. When thinking about how to spread Coke Zero, they wanted to create a new dance. They reached out to their audience to invent a new dance, and ended up receiving a story that, according to Mildenhall, "was much more captivating than what an advertising agency would write."

Coca-Cola took the story of a young man who used his frustration with his parents to create his own dance move, the Toe Tappy. All Coke had to do was curate the consumer-created dance, and ended up with the following:

One Way to Model This Strategy: Tap Into, and Listen to, Your Audience

Your audience of customers, fans, evangelists -- they're all bubbling with ideas. Coke may have a large audience, but it's not about size of the audience; it's about having the right audience. So reach out to yours and ask for their ideas and contributions. Try starting a hashtag that people can use to submit ideas. That way, you're generating ideas while spreading buzz about your campaign. You can then evaluate the ideas that have come your way, and find ways to execute.


One Way to Execute This Strategy: Create Instagram Videos

When it comes to execution, who says you need to tell a story through an HD video that involves weeks of editing, and money spent on models and actors? Some of the best content is shot right on our smartphones. Grab a smartphone and shoot a quick 15-second video that you can then share on Instagram. Try creating a series of videos with the ideas your audience shared. You can then aggregate and share these videos by embedding them onto your website or blog, and promoting them via social channels. You can learn how to do that easily in this blog post.

When Coca-Cola was working on expanding their global presence and had the goal of doubling in size within the next ten years, they learned that 50% of teens and young adults in Australia had never tasted a Coke. To address this, they discovered the 150 most popular names in Australia and printed them on bottles of Coca-Cola. And what happened? People not only began to buy those bottles, excited with their names plastered on the front, but they began to demand more. Check out how the campaign worked out:

One Way to Model This Strategy: Personalization

Coke followed one simple marketing principle: personalization. Personalizing your marketing can help you reach a quality audience. When launching your next content campaign, think deeply about a problem you or your audience is facing, and use your content to solve it. Try catering your web content to the people who are visiting your site, and presenting them with the right information at the right time.

One Way to Execute This Strategy: Personalized CTAs

Now, the execution doesn't have to be spreading your product physically around stores like Coke did, but you can spread personalization across your web presence. Start using personalized calls-to-action (CTAs) across your website. While Coke wanted to spread purchase of their product in Australia, maybe you want to spread the use of your product to a particular audience. Use forms on your website to collect information about your visitors, and then use that information to personalize the CTAs you present to them when they return. If you have yet to try personalizing the CTAs on your site, check out this blog post to learn how.

Here's my favorite campaign of the bunch. Mildenhall shared how Coke wanted to move from one-way storytelling to dynamic storytelling. Thus, during the 2013 Super Bowl, Coca-Cola live streamed two polar bears who were watching the game, with each one being a fan of each playing team. The bears reacted to their respective teams winning or losing, the commercials that aired, and so on. While you can see an example below, you can watch the bears in all their glorious moments here.

One Way to Model This Strategy: Real-Time Marketing

This campaign focused on the growing need for real-time marketing. Your team needs to be alert to what is happening around you, and what news can be relevant to your business. But that doesn't mean you can't plan your real-time marketing .... ahead of time. While this doesn't always work, if you know that a big event (such as the Super Bowl) is approaching, brainstorm different visuals or tweets you can be sharing throughout the event. But, it's also wise to have someone at-the-ready if something big happens and could use your attention.

One Way to Model This Strategy: Newsjacking

In order to actually be ready to conduct real-time marketing, you need to be ready for newsjacking. Newsjacking is taking news and making it relevant to your industry. For example, if you're a mobile app developer, and Facebook announces its latest mobile advertising functionality, it could benefit you to start sharing some tips on how to capitalize on the new Facebook mobile update as experts in the mobile space. To learn how to actually newsjack and set up ways to make it easier to do in real-time, check out this post.

While these are only three of the endless campaigns Mildenhall showcased during his keynote, these three highlight how any business can replicate the same ideas a big brand executes on. The money Coca-Cola invests goes into production, not ideas. As long as you find other resources to produce, you can execute on ideas just as great any day!

Throughout Mildenhall's keynote, and throughout the stories he shared, there was one phrase that continued to ring true: open happiness. While this has stood as Coca-Cola's tagline for some time, the business truly launches its content campaigns around this idea. None of these campaigns would be as successful as they were had they just focused on, say, personalization. Instead, they decided that with their campaigns, they will go the extra mile to delight their customers. One of his other stories highlighted the initiative to "Share a Coke," where customers could help delight other customers by purchasing Cokes for them. There were numerous other campaigns that took these types of "delight" concepts into account.

But in order to effectively delight your customers, you need to understand them. Coca-Cola has clearly invested time in understanding their audience, building an editorial calendar, and mapping content to the buying cycle. I mean, they went from tapping into a completely new audience in Australia to simply gathering story ideas from current customers in the examples above! That's why we created a practical guide for creating your own killer content strategy. You can download it here, and use it to create your own Coca-Cola-esque strategy, all while modeling a big brand and spending little-to-no money.

Discover Your Writing Genius: 8 Tips for Doing Your Best Work in 2020