Should You Delete That? A Guide to Moderating Blog Comments 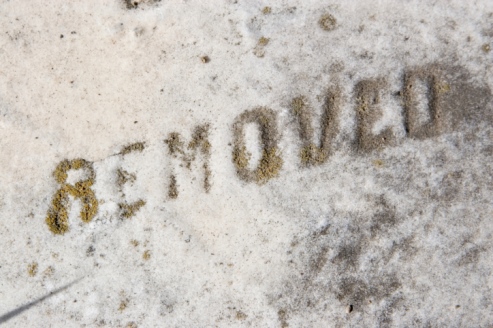 If you're looking for a post that gives you the green light to delete those annoying comments you get on your blog, good news: This is the post for you.

While some of the comments that make your blood boil will still be gracing your blog (see the section titled "Don't Delete Even Though You Want To"), this post will explain which types of comments should be immediately deleted, and which ones you're justified in deleting when you're on the fence.

Alright, ready to dive into the scary world of blog comments? Me too. Well, as ready as one can ever be.

Even if you didn't write the rude, crude, or offensive content, you're still responsible for ensuring it doesn't live on your site. A couple years ago, we got an email from a blog reader who had stumbled upon an old post that was still receiving comments. She was writing to let us know that someone had left some unsavory content in the comments section, and that she thought we'd like to know -- that was a truly appreciated email, because we didn't want our site to harbor that kind of nastiness. Work hard to keep the filth off your site and rely on your community to help you monitor.

Tip: You can try to pre-empt some of this by setting up commenter guidelines. Check out what the New York Times does -- they go into a lot of detail on this page about how they deal with comments, and what they expect out of their commenters.

Of course, you should also get rid of obvious spam comments. You can use Akismet to block a lot of the spammy comments, but some will still get through. If you're not sure what blatant spam looks like, here's an example:

It's a term I just made up to explain spam comments that, to the untrained eye, look like they might be legitimate. But they're not. They're spam written by someone with marginally more initiative than your garden-variety spam commenters. Here's an example:

Because the post on which the comment appeared was about brides, the comment kind of makes contextual sense. Except that it's devoid of any actual content, and there's anchor text pointing another website in a useless ploy to get inbound links. Other ways to identify secret spam include:

Sometimes, it's hard to tell the difference between secret spam and someone who just doesn't know how to leave coherent comments, though -- so you'll have to use good judgment here. Which leads us to our next section ... the gray area! (Who doesn't love some confusing gray area?)

Trollers are people who leave comments on posts to try to get a rise out of either the author, or other commenters. The best practice for dealing with trolls comes down to one easy-to-remember phrase: Don't feed the trolls. This means the more you engage with trolls, the bigger and stronger they become -- that's what they want! To get a rise out of you.

So while some people would say you should definitely delete troll comments, sometimes this can incite trolls to get more aggressive with their commenting. As such, the best thing you can do with trolls is to just ignore their comments, unless it ventures into the rude, crude, or offensive bucket we discussed earlier.

If you're getting comments in other languages, it's hard to tell whether you should keep or delete the comment ... because you can't read it. If the comment looks like spam -- the biggest hallmark would be links -- go ahead and delete it. But it's a good idea to plop the text into Google Translate to see whether the comment does contribute to the conversation. Who knows -- you may have more international readers than you suspected!

Some comments are clearly someone in Marketing or Sales trying to get either leads, or an inbound link. Now, you may think these should be deleted because they're completely self-serving, but sometimes, it's just a commenter that's trying to contribute who doesn't know commenting etiquette. Consider the difference between this hypothetical comment: 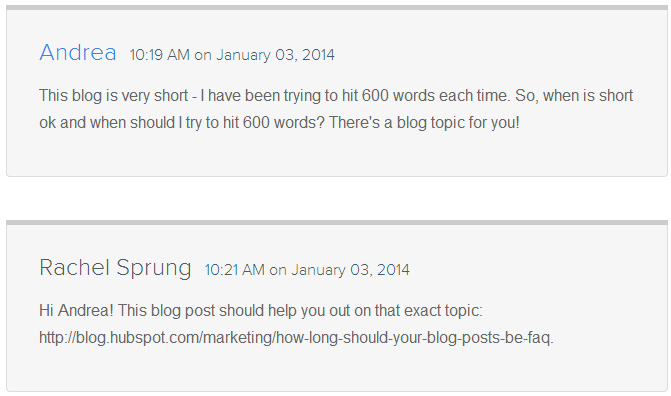 You see how that second comment is actually helping someone out, and it doesn't seem like a Sales or Marketing pitch? Well technically, that first hypothetical comment could have been doing the same thing. It just seemed really spammy-looking. If you're about to delete a comment because it seems like someone's simply shilling their own products or content, take a second to assess whether they're just out of tune with commenting etiquette. They might actually have something helpful to contribute that simply isn't presented properly.

Don't Delete Even Though You Want To

Remember earlier, when I talked about the comments that make your blood boil? Yeah, sometimes you have to keep those.

When a commenter is argumentative -- either with you or another commenter -- it can make you feel a little tense or even infuriated. But healthy discussion (healthy is the operative word there) is what makes your blog an interesting place to comment. Don't delete the dissenters, even if you think they're wrong. Best-case scenario: They are wrong, and other commenters chime in to make it clear. Worst-case scenario: They're right, and you now have a comments section where smart people can actually hang out and teach other things.

Not too shabby either way, eh?

12 Great Examples That Prove the Power of Repurposing Content

Types of Blogs that Make Money in 2020

What Is a Blog, & Why Should You Create One