Why Digital Teams Risk Losing Empathy and Trust, and How to Fight It

Welcome to The Science Behind Success -- a new blog series that explores the best ways to help our brains perform better at work. With psychological research and interviews with leaders in the field, we're showing you how psychology can help you overcome workplace obstacles and excel in your career. Because a little mindset change could go a long way. 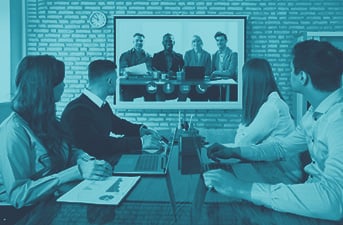 Nowadays, it's becoming increasingly common to communicate almost entirely through digital devices -- and the workplace is no different.

On any given day, you likely respond to colleagues on a variety of channels -- including email, Slack, Zoom, Chanty, Facebook Workplace, and other internal messaging tools. On rare occasions, you might respond face-to-face.

With instant messages constantly flooding your inbox, you probably don't pay too much attention to the responses you send out: "Yes!! :)" "I think that would be ok." "Is that a good idea??".

But have you paused to consider how your digital responses are being perceived in the workplace ... and the potential effect they're having on your in-person relationships?

To explore how digital communications influence our in-person interactions in the workplace, I spoke with Erica Dhawan, the world's leading expert on connectional intelligence and digital body language. She is the co-author of the bestselling book Get Big Things Done, host of the Masters of Leadership podcast, and founder of Cotential.

Here, we'll explore how to build trust and empathy through digital channels, the biggest digital communication mistakes someone can make, and how to cultivate a sense of belonging even within virtual teams. But first -- why does in-person communication even matter?

A Loss of Empathy Through Digital Communications

We all know the importance of nonverbal communication on interpreting meaning. When someone is speaking, you don't just internalize what they're saying -- you also take note of body language, tone of voice, facial expressions, and eye contact when deciding how to make sense of a conversation.

Additionally, science suggests observing another person's emotions can help us experience what the other person feels -- a theory known as emotional contagion -- and, as a result, better understand the intentions and actions of the other individual.

For instance, if your colleague is slouched and he frowns when he tells you about the results of his latest Facebook campaign, you'll likely internalize his sadness or frustration as your own -- making it easier for you to empathize and understand his perspective when communicating with him.

Alternatively, if he sends you a Slack message -- Facebook campaign only collected 10% leads, which is less than I thought -- you might not sense that he feels remorse over the decline.

The theory of emotional contagion isn't just limited to one-on-one interactions, either. In fact, studies have found group emotions can influence how an individual feels, and vice versa -- for instance, one study of professional cricketers found the happy moods of individual cricketers were linked to the upbeat mood of the entire team, regardless of the game's outcome.

Additionally, touch and physical proximity have been shown to increase trust. For instance, an experiment conducted by researchers at the University of Chicago and Harvard found that negotiators who shook hands were more open and honest, and reached better outcomes, than those who didn't.

All of which is to say -- nonverbal cues are critical for evoking empathy and connection between two people or within a group, which means a sense of understanding is often lost when communicating digitally. So, while it's impractical to assume every workplace interaction can happen in-person, it's nonetheless critical we learn how to assess someone's "digital body language" to find other ways to connect with our colleagues.

To create stronger connections and combat a loss of empathy in the workplace, let's explore some of Erica Dhawan's suggestions for building trust among a digital team.

How to Generate Trust in a Digital World

More than likely, the majority of your workplace communication happens online. It's effective and easier than constantly organizing in-person meetings or interrupting coworkers at their desks.

Plus, remote work is becoming increasingly common, with 70% of professionals working remotely at least one day per week -- which often makes in-person impossible.

Fortunately, a digital-first team doesn't need to lose empathy and trust. The team just needs to learn how to foster it in other ways.

For instance, Dhawan recommends leaders think about how they might create structures that remind and enable their team to slow down. She urges leaders to remember it's critical the pace of business, at times, take a backseat to the health of the relationships on the team.

"One way this can be done," Dhawan says, "is by structuring meetings with short but specific time for simple connections. When people are able to interact with each other in a non-hurried, authentic way, it makes for a more enjoyable workplace and increases productivity and creativity dramatically."

In addition, Dhawan suggests using video calls to increase familiarity and deepen connections among remote and in-person employees (as opposed to phone calls, or email chains).

Lastly, Dhawan notes it's critical teams still practice "celebration and appreciation -- anything from an email acknowledging hard work, to a quick two-minutes at the beginning of a conference call to wish someone a happy birthday."

Unfortunately, the loss of in-person communication results in a lack of spontaneous conversation or "water cooler discussions". To combat this, leaders need to create space and time solely dedicated for team members to connect, break down barriers, and find ways to empathize with one another.

The Biggest Digital Communications Mistakes You Can Make

Personally, I'm guilty of overusing smiley faces, exclamation points, and other friendly punctuation in my workplace emails and Slack messages. While it certainly helps me avoid seeming rude, I'm sure another argument might propose my communication style signifies an immaturity I should try harder to avoid.

When I asked Dhawan about the biggest 'mistakes' someone can make when communicating digitally, I expected her to point out something along these lines.

Instead, she told me, "One of the most common mistakes I see in digital teams is hastiness."

"The time between send and receive doesn't exist anymore. And the space between receive and reply is tightening."

She has a point -- particularly, as she notes, with the advent of the read receipt, as well as instant messaging forms such as Slack, it's easier than ever to feel compelled to answer an email or message immediately. But, typically, the time we receive the message is not always the best time to respond to it.

Dhawan says we all need the equivalent of a digital pause, which she compares to the person in a meeting who says, "Hey, can we step back for a minute to look at the larger picture?" She urges people to fight the notion that you must respond to an email within 30 seconds.

"If we can step away from our impulses to respond first or immediately," Dhawan says, "We can find real power and control in the silence."

To avoid responding to all your digital messages in haste, try blocking off time in your calendar to diligently and patiently respond to your emails, even if you don't have the time until the end of the day. Or, if it's a Slack message, perhaps you can respond, "Hey, I'll answer your question in a bit" if you don't have time immediately.

Additionally, re-read what you've written before you send it -- and, Dhawan notes, "Always double-check the CC'd box!"

How to Cultivate a Sense of Belonging Among a Virtual Team

Having a sense of belonging is a critical component to psychological safety in the workplace, which can increase employee engagement and foster creativity and innovation. But it's easier said than done, particularly when your team is largely remote.

To cultivate a sense of belonging among your team, Dhawan suggests first identifying the three types of distance that impede a sense of belonging when it comes to a virtual workplace -- "the physical distance, of course, but also operational distance, which is the type and quality of communications, and lastly, affinity distance, which is the cultural difference between members, including generational and hierarchical variances."

The last type of distance -- affinity -- can have the greatest long-term effect on your sense of belonging, or lack thereof, Dhawan notes.

To combat this distance, Dhawan suggests teams "regularly share stories about yourself that help others learn more about you (especially when they can't read your body language)."

Additionally, it's crucial you make an extra effort to create shared context. "Instead of asking what the weather is like on a call, ask questions to your team about their work ethic and lifestyle -- e.g. 'How do you like to work? What's important about the work? How do you experience success?'", Dhawan told me.

"This can be organic, or you can ingrain it into a process. If you don't have shared context, it's likely you aren't looking at a problem the same way, and that's a critical gap to first deal with."

Finally, let's explore three rules each member of your team should follow to increase the efficiency of your digital communication.

1. Speed matters more than your words in terms of indicating respect, so write apologies and thank you's quickly. On that same note, acknowledge requests quickly and be sure to provide a timetable for when you'll be able to re-engage in the conversation.

2. Don't rely on one channel of digital communication for your team. In fact, use three. Using various platforms allows for diversity in context especially among generations and personalities. Three is also great since it's not too many, which could create confusion or lose communications along the way.

3. Don't beat around the bush. The best online communicators are clear and direct and that's how you need to be, too. While being direct may sometimes seem blunt and detract levels of empathy, the clarity they provide is of the utmost importance in digital communication today. Everyone needs to be on the same page for the team to be effective. Clarity also promotes openness and provides for the ability to be innovative in a group setting. Say what you mean and mean what you say, and don't be ambiguous.

Here's the thing: technology isn't going away -- and we don't want it to. It can help us connect with people globally, and undoubtedly increases efficiency, speed, and innovation for our businesses.

But, while there's a long list of benefits to technology, there's an equally long list of potential disadvantages our businesses could face as a result of technology -- and a loss of empathy and trust is at the forefront.

Fortunately, there are plenty of opportunities for leaders to combat those challenges, as outlined above. Ultimately, slowing down and re-reading your message before you click "Send" could be the difference between misunderstanding, and a stronger sense of belonging.