How Emotion-Detection Technology Will Change Marketing

Imagine someone arrives at your website, Facebook Page, or advertisement. Now, imagine that you could change your marketing dynamically, right there on the spot, in response to their emotional reactions.

It would be nothing short of a game changer for your business, right?

Yet this is not fantasy. Exploding with investment and technological advances, the world of emotion detection and recognition technology will change the face of marketing in the years to come.

Emotions are what drive your audience to purchase. In fact, studies by the neuroscientist Antonio Damasio found that people with damage to the part of the brain that triggers emotions -- in other words, people that are unable to feel emotions -- find it extremely difficult to make decisions.

The lesson? If your marketing is not evoking an emotional response from your target audience, you are making it extremely difficult for your prospective customers to purchase from you. That’s right, your own marketing is potentially causing prospects to turn away from you and your brand.

What's a marketer to do? Let's dive into some research.

The Power of Emotions

Many of the most successful marketing campaigns and initiatives are focused on emotions. Take Dove’s “Real Beauty” campaign, which was an attempt to change the conversation around women’s beauty. Or Nike’s “Just Do It” campaign, firing up the inner-athlete in everyone. Or MasterCard’s “Priceless” campaign, which has been powering brand success for a whopping 19+ years.

All of this marketing aims to move your heart, and then relies on the experience to build a lasting bond with the brand. What it doesn’t do is rely on feature sets, discounts, or new technology to move you to a sale. None of it speaks to the number of offices, employees, or years in business of the brand. Google Senior VP of Global Marketing, Lorraine Twohill, states, “If we don’t make you cry, we fail. It’s about emotion.”

Twohill is not alone with this sentiment. Multiple studies point to emotional marketing as more effective than other forms of marketing (e.g., product-focused marketing). Based on an analysis of 1,400 successful ad campaigns, the book Brand Immortality by Hamish Pringle and Peter Field reveals that advertising campaigns focused on emotional content performed approximately twice as well (31% vs. 16%) as those with only rational content.

The power of emotional content should not come as a surprise. After all, emotions drive us to action. As consumers, we first decide on a purchase based on emotion, and then try to justify it through the more rational parts of our brain. Longer-term, emotions are what cause people to prefer brand names, even if generic alternatives are available.

Findings from a 2015 Nielsen Consumer Neuroscience study of 100 ads across 25 brands in the consumer goods market revealed that ads with the best emotional response generated a 23% lift in sales, meaning that emotional marketing is not merely effective as an engagement vehicle but also as a true business driver.

And don’t think that emotion-based marketing is applicable to only B2C marketing and individual consumers. Business buyers are also creatures of emotion. In fact, successful B2B companies like GE, Cisco, IBM, AutoDesk, and Qualcomm all focus on emotions in their marketing. Similar to the Pringle and Field findings, the research report “From Promotion to Emotion: Connecting B2B Customers to Brands” by CES and Google explains that B2B brands achieve roughly twice the impact with a target audience when appealing to the personal value to the buyer including emotional benefits.

A Mountain of Investment

In consideration of the power of emotional marketing, it should be no surprise that the emotion detection and recognition market is projected to be worth $22.65 Billion by 2020, according to the market research firm MarketsandMarkets. As a result, investment in the space is exploding.

Apple, one of the most valuable companies on the planet, has been keenly interested in emotion recognition for years. In 2014 the company filed a patent that described software for analyzing and identifying a person’s mood based on a variety of signals, including facial expression. Earlier this year, Apple acquired Emotient, an emotion-recognition technology company.

Emotient has a patent for a method of collecting and labeling up to 100,000 facial images a day, supporting a computer’s ability to recognize facial expressions. It’s reasonable to believe that Emotient’s emotion recognition technology will start appearing in iPhones and iPads before you know it, and then possibly used as a platform for more targeted and dynamic engagement when users are in their browsers.

Overall, those using emotion analysis to test audience reaction to their marketing include major marketers such as Unilever, P&G, Mars, Honda, Kellogg, and Coca Cola. For example, Kellogg’s used Affectiva’s software to determine its ads for Crunchy Nut cereal, with the goal of generating high engagement rates with the audience. Viewers were shown multiple versions of a commercial featuring animals. A version of the ad featuring a snake produced the most laughs, but low engagement rates when viewing the ad a second time.

The facial recognition software revealed that an alternative version of the ad featuring an alien produced the desired engagement levels. Kellogg’s therefore decided to rollout the alien-based ad instead, helping to drive the cereal’s sales.

Nothing Short of a Revolution

Being able to adjust one’s marketing dynamically, based on the real-time reactions of your audience, will empower marketers to provide the right message at the right time to the right person.

In the future, it's likely that you'll be able to calibrate your marketing mid-stream with just about any digital experience -- no two prospects may experience a brand’s marketing in the same exact way.

Going beyond advertising, you can already see how Facebook is on a path to incorporating emotional reaction into a user’s News Feed by introducing "Reactions" this past February. Rather than simply "Liking" a post, users can now designate their reaction across six emotions: Like, Love, Haha, Wow, Sad, and Angry. 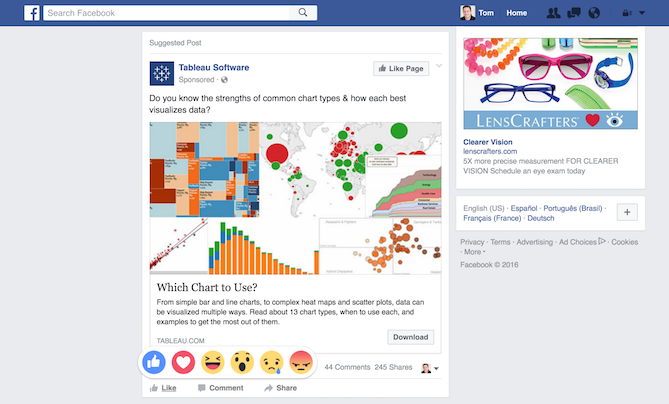 Facebook interprets the use of Reactions as an indication that a person’s network on the social platform wants to see more of those types of posts. That type of primitive application is sure to evolve moving forward. Sammi Krug, Product Manager at Facebook, explains, “Over time we hope to learn how the different Reactions should be weighted differently by News Feed to do a better job of showing everyone the stories they most want to see.”

As of the time of this writing, Facebook Ads treat Reactions the same as Likes. Ad reports do not include a breakdown of individual Reactions, although the breakdown can be found in Page Insights. For ad delivery, as well, Reactions are treated the same as Likes. Of course the next logical step will be for Facebook to treat different emotional reactions differently, rewarding Love more than Like, for example, and demoting an ad’s visibility if users express anger.

It's safe to say that we should expect a great deal of change in the world of marketing moving forward. Gabi Zijderveld, CMO at Affectiva, provides a peek into the future by explaining the evolution of emotion recognition technology:

Initially, the technology was used to understand how consumers engage with their brand content and advertising, and how these emotions then influence brand awareness and purchase intent. Now the technology is also used to infuse consumer experiences, apps and interactive advertising with Emotion AI. This will help to transform the face of marketing and advertising by reading human emotions and then adapting consumer experiences to these emotions in real time. The technology gives marketers the power to truly delight and engage their customers with uniquely dynamic and personalized interactions.”

Web development is already on the path towards more personalization. As emotion recognition technology becomes more sophisticated and more deeply embedded in our array of devices, it will become expected that our computers and phones provide us with a continual progression of customized triggers and messaging. The technology will be found even in future car dashboards, refrigerator doors, and conference room walls -- essentially any surface will become a possible means for detection of emotions.

Social media will constantly focus on each user’s emotions. For example, in the future expect Facebook’s algorithm to focus just as much on one’s emotional reactions as it does to one’s historical click behavior, providing a unique social environment that goes far beyond prediction of the types of posts, pages, and ads one would like. Expect Facebook Ads to provide advertisers with the ability to hyper target not only based on age, geography, and job titles, but also on the individual’s emotional state or progression of emotional states.

Online marketing will likely evolve into sequential experiences, with deeper engagement upon recognition of positive emotional reactions. You can also expect more deeply embedded forms of marketing similar to product placement. Ultimately, expect emotion recognition to be just another core component of marketing, similar to how “digital marketing” is now really just “marketing.”

Emotion recognition technology is clearly bringing about a revolution in marketing. Are you ready to start capitalizing on the opportunity?