How to Identify the Name of a Font [Quick Tip] 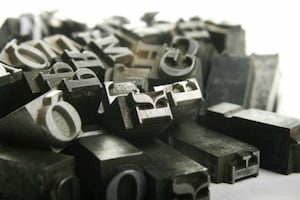 Sometimes, marketers don’t have access to a professional designer. Sometimes, they’re left to their own devices to get something designed and published. And sometimes, that means they need to find the name of a particular typeface so they can go download it or buy it to use in a Facebook post photo, a poster, or some other form of marketing collateral.

Unlike designers, who can look at any headline, street sign, or billboard and tell you what font it is (and who designed it) in a matter of seconds, we non-designers have no clue whether the font even has serifs -- whatever those are. All we know is that we saw a specific font used in a logo, a window display, a magazine spread, or a display ad and we liked it and wanted to know what it was called.

It turns out that it’s not all that difficult to find that font you’re looking for -- and it’s actually kinda fun.

There are several websites that help you determine one font from the next by guiding you through a series of questions (like a treasure hunt!) about the font’s characteristics. My favorite is Identifont, and I’m going to tell you how to use it so you can find that typeface you seek and feel like a victorious detective once you’ve identified its name.

To start, let’s assume we have absolutely no clue what font this is and go through the process of discovering its identity together: 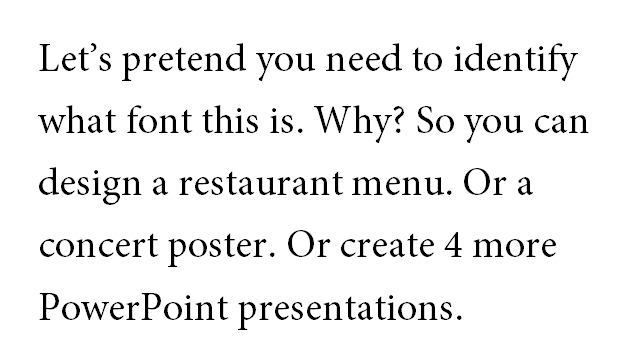 Now, head on over to Identifont and start analyzing the font by its appearance. We know our font sample has serifs, which Identifont describes as "spikes or slabs" on the ends of the letter strokes, so we click "Yes": 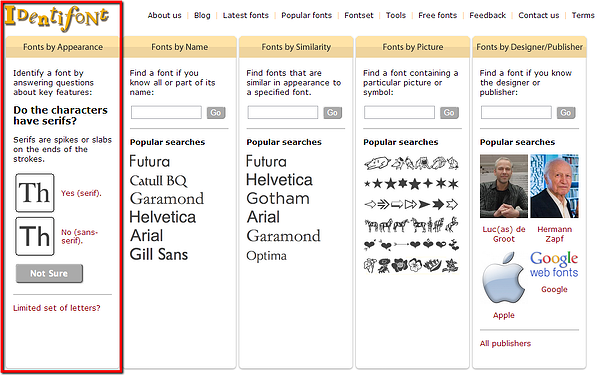 Identifying a font is all about looking at the fine details. You can usually tell two fonts apart by comparing the Q, the R, or the W. That's why Identifont has us analyze the tail of the uppercase 'Q,' but since our text sample doesn’t include one, we’ll click "Not Sure":

The next series of questions asks us about the characteristics of the 'J' height and dollar sign, but since we don't have any of those letter forms either, we click "Not Sure" until we arrive at a question we can answer:

In the word "PowerPoint," we can see that the center bar of the uppercase 'P' meets the vertical stroke, so we click on that option. Under "popular matches" on the right, you can see that Identifont is starting to narrow in on a few typefaces that might match the one guised in our sample text.

Now we're looking at the lowercase 'g,' which we have in the word "design" in our sample text, and we know it’s a double-storey 'g':

The next question we’re able to answer allows us to rely on that lowercase 'g' again. We know there isn’t a gap in the lower storey of the lowercase 'g.' Identifont's possible matches continue to change as we provide more and more answers:

The next two questions we're asked are about the uppercase 'W.' From the "Why?" in our sample, we know that the 'W' has three upper terminals and no serifs (the next question):

The 'h' has two serifs on each foot:

The lowercase 'c' has a rounded ball. We’re starting to get closer and closer to uncovering which font we have:

The lowercase 'e' has a straight horizontal bar.

Wait for it … we're getting there!:

The vertex of the uppercase 'W' comes to a point:

The 'y' is angled instead of curved:

The uppercase 'S' doesn’t have any upward-pointing serifs:

The tail of the 'y' is straight:

Minion is close, but it's not exact. How do we know? If you look really closely, the serifs in our font sample aren’t quite as pointy as they are in Minion. So, let’s consult the options listed under "popular matches" and see if another similar font is actually our identical match.

We try Minion Pro and compare several letterforms from our sample to both Minion and Minion Pro -- 'y' with 'y,' 'C' with 'C,' 'W' with 'W.' Sure enough, Minion Pro is the perect match.

So, there you have it! Identifying a particular typeface may take a little time, but at least a helpful tool like Identifont makes a game out of it. Once you’ve identified your font and downloaded it, all you need to do is install it and get designing!