How charity: water Has Reinvented the World of Charitable Giving 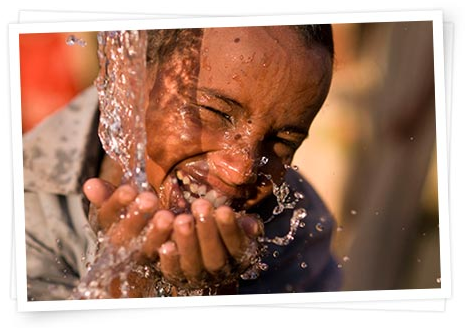 The IRS lists that there are over 1.1 million nonprofit organizations in the United States -- so nonprofit marketers, like the rest of us, have their work cut out for them. Getting people to care deeply enough about an issue is extremely challenging, particularly given the number of emails, invitations, and requests most people get on a daily basis. So, how does a nonprofit stick out from the pack?

One nonprofit chose to focus on radical transparency, giving donors the security and comfort of knowing that every dollar they donated would directly benefit their mission. This is the story of how charity: water embodies the inbound nonprofit, and why HubSpot and charity: water are partnering to transform nonprofit marketing. (Learn more about the partnership in this video, and keep reading for more about charity: water's inbound giving strategy.)

One of the fundamental principles of inbound marketing is building an online community of individuals who know, love, and share your brand with others -- and then moving their engagement along to inspire them to take action. Historically, nonprofits have put themselves and their mission first. Instead, charity: water decided from the beginning to put their supporters at the center of their organization, by empowering them to tell their own personal stories of how they became connected with the cause and fundraise individually to help end the world water crisis.

In short, charity: water created a new model to make their marketing efforts more personalized, which in turn made their entire approach more lovable. We’ve outlined more details on how and why charity: water is the model for the inbound nonprofit in this post, and how that benefits their fundraising efforts, their donors, but most importantly, the villages they bring clean water to every year. I hope you find some inspiration in their approach, and perhaps some ideas to take away for your own nonprofit fundraising and marketing.

Dollars to Projects: The Power of Proof

Sharing the impact of your organization’s funds raised may not have been a high priority in the past. But with the growing debate of overhead vs. impact, supporters are looking for the results of their donation more and more. Charity: water has woven this concept into their model from the beginning.

For instance, founder Scott Harrison shared the GPS coordinates of the first wells that were built to everyone that attended his birthday-party-turned-fundraiser, where he raised the first $15,000 dollars for charity: water. From that, Dollars to Projects was born -- a program that “tracks every dollar raised, showing you the water projects you helped fund for people in need.” Here's how it works:

After charity: water designates an individual’s given funds to a project, they email a custom project report with pictures and results. Here is an example of a water project report a supporter might receive: 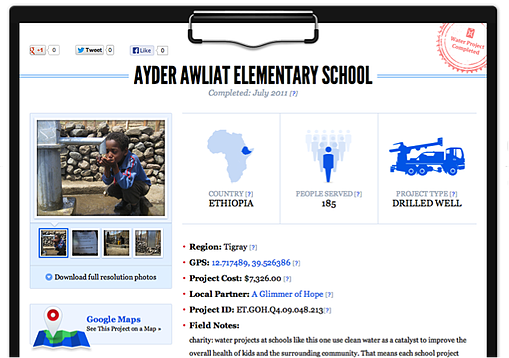 The hope for the future is that in 10, 15, 20 years, their supporters will be able to see the impact of their previous fundraising campaigns or donations and see how they have affected one person -- or an entire village -- by supporting charity: water. But whatever a donor or fundraiser can give or raise, the proof of their impact is right there for them to see.

Captivate an Audience With Video

With an annual September Campaign that raised over $2,000,000 in 4 months last year, charity: water brought the story in Rwanda to thousands of computer and phone screens with five distinct videos. The first of the series was a movie-like trailer that launched the campaign on September 1, 2012, narrated by founder Scott Harrison.

The story isn’t just about the country's need for clean water. The video highlights the recent history of struggle in Rwanda, as well as the need for education and new roads. In fact, clean water isn’t mentioned until a minute and thirty seconds into the four-minute video. Images of the children and mothers carrying water from dirty water sources shows you the lengths people will go for something so vital.

Charity: water spends up to two weeks in the country they are going to dedicate their September Campaign to so they can capture footage for these trailer videos. They meet with the people that are going to be directly benefiting from funds raised, share their stories, and connect their audiences -- new and existing -- to the campaign before it even launches. They make the campaign as personal as possible, knowing that is what inspires people outside of the affected country to want to give and fundraise.

Donating to a cause you feel passionate about is one thing; but telling a specific story, about specific people, is far more compelling for donors and fundraisers. Think about how your organization can instill a personal connection with your own stories.

Some of the charity: water team was in India just last week, capturing footage and images for this year’s September Campaign. While not all organizations travel to the field for every campaign, you may have access to even attendees or site volunteers -- these are opportunities to capture real life stories of those either impacting your mission, or those that will be impacted. This is a very important moment for you to capture the stories of those involved and share them in real time with you social networks.

Charity: water did just that while in India through Instagram. They spoke to men and women whose live have changed since receiving clean water. They shared several of these stories with an image of the person as well as a short comment of how that person's life has been impacted: 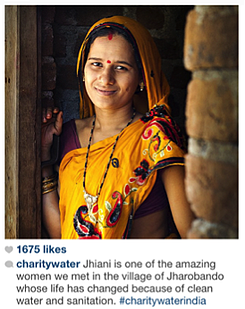 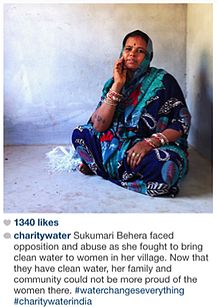 These are only two women, but they represent all the women in India that are fighting for clean water, among many other necessities to improve the quality of life in their villages. Any woman (or man) can relate to these two individuals, and their stories reached over 110,000 followers because charity: water took the time to share them through social media.

They also have a dedicated page on their website for storytelling -- because they’ve seen the proof in the form of donations -- that these real life stories inspire people to support their mission.

Not only does charity: water partner with other organizations across the globe to provide thousands of people with clean water, they also partner with like brands who are willing to contribute a percent of their product sales to fund water projects.

Tom’s shoes, who donates one pair of shoes for every pair sold to communities around the world, first partnered with charity: water back in 2010. They designed two limited edition shoes and donated $5 from the sale of each one. As a result of their sales, they brought clean water to 540 in Ethiopia. They came together with charity: water again for this year’s September Campaign, with a limited edition eyewear collection that contributes $10 from the sale of each pair. They even shared a photo of a child in India wearing a pair on Instagram just a few days ago.

Another online retailer, Bonobos, partnered with charity: water earlier this year by designing limited edition pants incorporating the charity: water logo. They donated $5 of each pair sold to charity: water, raising $30,000 and surpassing their $25,000 goal. They currently have a personal "thank you" page showing the results of their contributions: 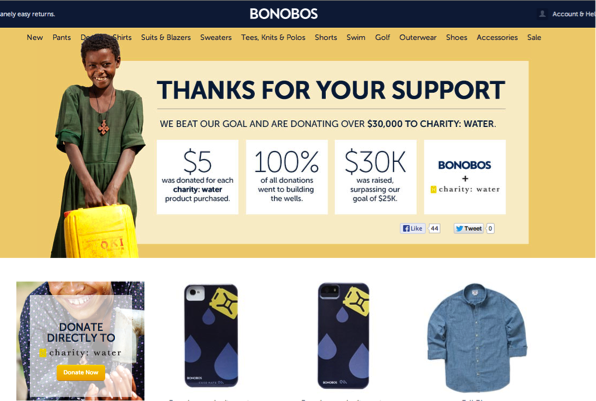 Partnering with like brands doesn’t just bring in more donations for an organization -- it spreads awareness of charity: water’s mission (or any organization's mission) to individuals who may not have found them organically. The target audience of Tom’s and Bonobos is very similar to the charity: water audience. By leveraging the reach of other companies, they were able to spread their mission online through channels they would not have access to on their own -- and Tom's and Bonobos enjoyed similar exposure to new audiences. This is a very creative way to grow your network and gain the support of for-profit organizations.

While there are many other ways to transform your organization into an inbound nonprofit, these are some great examples that you can replicate on a small or large scale for your own organization. I hope you've found charity: water's creativity and resourcefulness as inspiring as I do -- and that you share your own inspiring stories and ideas with us in the comments.

Want to see more of the partnership between HubSpot and charity: water? Scott Harrison and Paull Young of charity: water will both be speaking at INBOUND in August. Tell us how your nonprofit is becoming more inbound in the comments below.