About the Author: How to Write a Quality Author Bio

If contributing guest posts is part of your content distribution and promotion strategy, you're probably familiar with the following scenario: You write a great article for a guest publication, and at the end, you’re compensated with a teeny, tiny paragraph about yourself.

Unless you wrote the article for purely altruistic reasons, this paragraph, though short, is quite critical. Not only does it connect you to the article on a level beyond your byline, but also, it provides space for links back to your website or social profiles. And who wouldn't want even that little bit of glory?

But what are you supposed to write in that brief paragraph, anyway? How do you make your author bio compelling, powerful, and effective -- without a whole lot of space?

As it turns out, there are quite a few seemingly small ways to approach your author bio that can help it have a much bigger impact. But what do they look like, exactly? Read on -- you’re about to find out.

How to Write an Author Bio 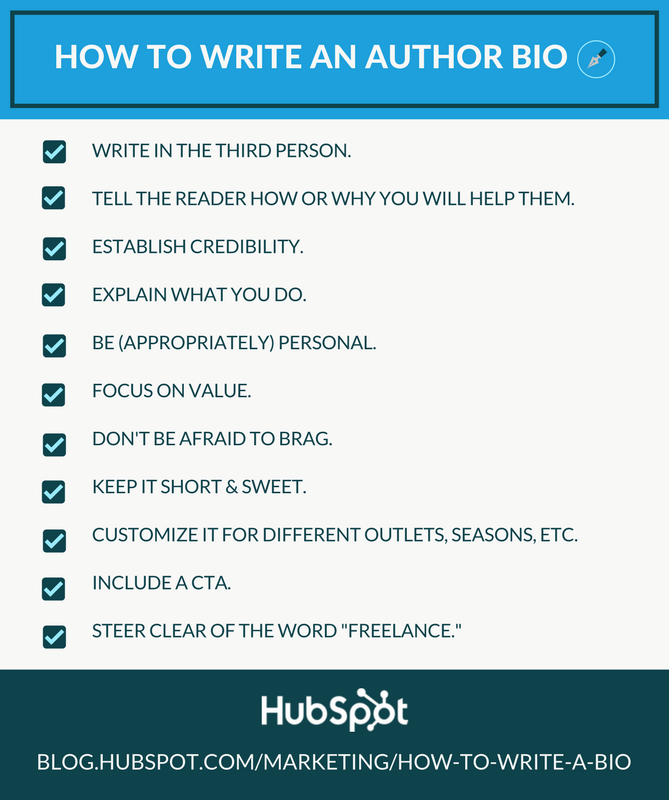 1) Write in the third person.

Different publications will have different standards -- Forbes, for example, seems to encourage guest contributors to write in the first person, as per below: 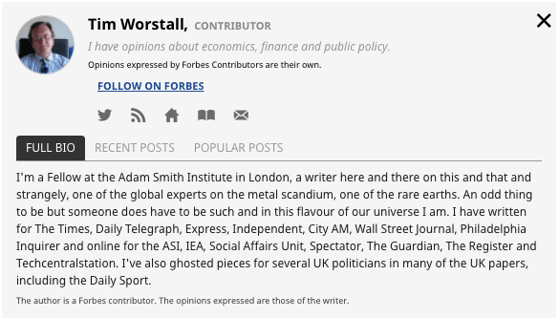 However, the general practice is to write your bio in the third person. If it feels a bit self-congratulatory, that's okay -- you can even turn it into a joke, like Mark John Hiemstra did in his bio for a post on the Unbounce blog:

Once you've written the bio, be sure to re-read it to make sure you're not overusing “he” or “she.” And if you are, try replacing some instances of these pronouns with your name to improve the flow.

2) Remember: It's not really about you.

Even though this paragraph is allegedly about the author, it’s not actually about you. It’s about your reader, and what that person is looking to learn or gain from your article. It helps to think of this setup as a well-composed sentence -- you're the object, and the reader is the subject.

That concept can be a bit confusing without context, so have a look at how Matt Southern pulled that off below: 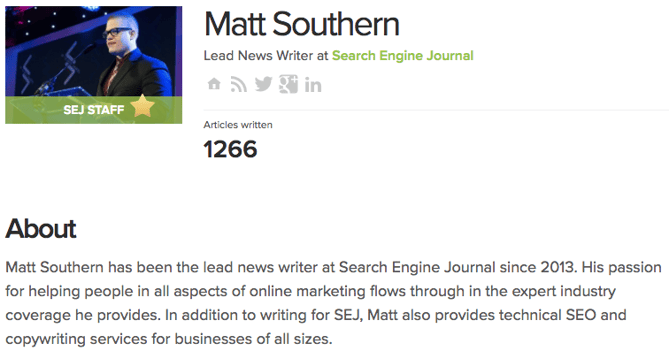 Notice how Southern's bio focuses on both himself and the reader. By explaining that his real passion is to help marketers, it serves as a nod to his readership -- after all, your readers are the ones who ultimately decide if your piece is worth sticking around until the end, sharing, or discussing. Write for them.

As the digital landscape only becomes increasingly crowded, it's important to have a prepared, accurate way to answer the masses asking, "Why should I listen to you?"

Readers are right to ask that question, especially with many now questioning the accuracy and reliability of news. So, in your bio, establish your credibility, and be honest. Why are you qualified to write on this subject? Why should readers believe you?

If you write about conversion optimization, for example, explain what kind of experience you have with it. If you have academic degrees, list them -- but only if they're relevant to the publication or article. A bachelor's degree might not be considered outstanding enough to warrant a mention in your bio, though there are exceptions to that rule. Let's say you're writing about women's issues. If you attended a women's college, it might be worth mentioning in that particular instance.

Let's have a look at how this concept looks "in the wild."

When Forbes contributor Ian Morris wrote the above article on a mobile device, he used his one-line bio to explain why he's qualified to write on that subject. "I cover mobile," he explains, as well as "internet services and the good and bad of tech.” And in his full bio, he expanded even further on that:

4) And while you're at it, explain what you do.

It's the inevitable -- and often dreaded -- question of any social or networking gathering. "What do you do?"

Chances are, someone reading your work will have the same question -- it goes along the same lines of explaining why you're credible enough to be writing about a certain topic. So think of your bio as an opportunity to answer it -- after all, it’s a meaningful fact about you, and it deserves a line.

Notice how Yvette Tan immediately addresses that question in the first sentence of both her author and Twitter bio, highlighting the importance of keeping information consistent across different channels: 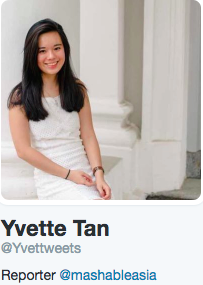 And Kiel Berry does the same thing for his contribution to the Harvard Business Review:

You've probably come across the occasional author bio that features a personal tidbit thrown in, like "cat lover" or "coffee addict." But when is that okay or smart -- or even more important, appropriate?

To answer that question, you need to think about where your article is appearing, and who's likely reading it. Not every publication, for instance, is going to be the best fit for a quip about your affinity for craft beer. That said, it's also good to remind readers that you're human, especially among your professional credentials. Still, keep it to a minimum -- readers are only marginally interested in your personal life, so your bio isn't the place to divulge a lot of those details.

Buffer's Alfred Lua uses his bio to share his hobbies like swimming. But by keeping it short, and sandwiching his personal interests between his job title and his personal one, he's able to show personality, while maintaining his credibility:

It can be tempting to turn your bio into a celebratory display of your interests and accomplishments -- you’ve won awards, started a billion companies, and have been published in top journals. But readers, more often than not, might be responding with, "Who cares?"

That's because they want to know what's in it for them. By putting content out there, you're essentially asking readers to borrow their time for what you've written. Sure, your status might be impressive, but they don’t really care unless they have something to gain from it. That’s where the idea of value comes in.

Use your bio to communicate that bio, and what you can do for your readers. Danny Wong does that well in his guest bio on ConversionXL's blog:

Notice the key word in the second sentence: "Teach." That’s the kind of value that might help Wong connect in a meaningful way -- by telling them, "I teach people, and I can teach you, too."

Let's have one more look at Wong's bio:

After he explains the value he can provide to readers, he uses the opportunity to mention a pretty big accomplishment: Founding what sounds like a highly profitable business.

Don't be afraid to toss out a few awards that make you the proudest -- just make sure that they’re relevant to the subject matter and the publication.

Just as you want to avoid bragging too much, you should probably avoid saying too much in general. Writing a super long bio might make you seem less than humble -- if all the other authors on the site have three lines and you have thirty, it only emphasizes your sense of self-importance, even if that's not what you intended.

Author Richard Ridley recommends that authors “keep it brief.” Here’s how he explains it:

Brevity is the soul of wit. Even if you're William Shakespeare, you don't want to write an author bio that fills up the entire back cover. In an odd twist of logic, the more accomplished you are as an author, the shorter your author bio can be."

It's okay -- we all have an ego. We just have to keep it in check sometimes. Here's a great example of a short-and-sweet bio from Orbit Media's Andy Crestodina:

If the publication allows you to occasionally update your bio according to the season, take advantage of the ability to customize it. A universal bio that you copy/paste everywhere is okay, but tailoring it to a specific scenario can help enhance it for a particular outlet.

Here's how HubSpot's Lindsay Kolowich does that with her bio:

By fine-tuning it to resonate with the season, your bio stands out against some generic messaging you might be used to seeing.

Ah, the call to action, or CTA. It's a powerful force in the marketing world, and it’s no different in your bio.

After your audience reads about you, they should take further action -- but what action do you want them to take? Most often, it's reading more of your material, or following you on social media.

In those cases, common CTAs would be to follow you on Twitter, or visit your blog. And while these options are effective, make sure the CTA is strategic within the given context.

For example, when Heather Hummel's work is syndicated by Huffington Post, her author bio contains a CTA to check out her books, creating a source of possible sales: 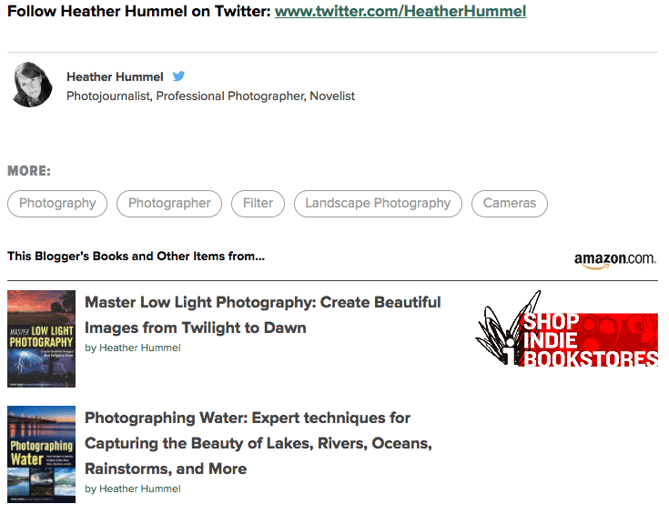 Of course, some outlets might not have the bandwidth or allow such a full-scale dedication to this kind of CTA within an author bio. But if the opportunity is available, use it to your advantage.

11) Steer clear of the word "freelance."

Freelance writers are an exceptional group of people who are skillful, qualified, and expertly positioned to write great content. But there's something about the word "freelance" that, for whatever reason, can chip away at credibility. It suggests that you might be more of a generalist, and less of an expert -- which, while not necessarily true, has grown to connote that while you might be good at writing, you might not excel at a particular subject.

If you’re a freelance writer, we tip our hats to you. But in your bio, there are ways to replace the word “freelance,” for the reasons above. Here are some examples:

The best way to create a meaningful bio is to write it with care and intention. Think about your readers, establish your credibility, and make it memorable. But go ahead and have some fun with it -- you want to prove that you’re human, too.

At the end of the day, your little bio matters. People care. They’re going to read it. Make it count.

Editor’s Note: This post was originally published in July 2015 and has been updated for accuracy and comprehensiveness.