Your Blog Posts Are Boring: 9 Tips for Making Your Writing More Interesting

If you’re a boring writer, you’ve got a tough road ahead. I hate to break it to you, but in today’s content-saturated world, people don’t have time to spend on content they don't enjoy reading.

Thankfully, there are some powerful antidotes to boring content. In this article, I’m dishing up some of my favorite.

After you read this article, go write one of your own. If you follow these tips, your article will be at least 817% more interesting.

That percentage was totally made up. But still, this stuff works.

I have science on my side for this one.

Stories produce instant brain activation. When the brain hears a story, it engages in neural coupling, a phenomenon that makes the brain actually experience the ideas being set forth in the story. Even the motor cortex, the part of the brain responsible for voluntary muscular motion, is activated by a story.

The brain also releases dopamine, the “happy chemical,” at emotional high points in the story.

Clearly, telling a story is a great way to be more interesting. Short, simple stories can be included in any article to up the interest factor.

2) Write in the first person.

Writing is the first person is natural. It’s the way that you talk.

If you and I were going to go to lunch, I would say something like, “I know of a really good sushi place about five minutes away. I’ve eaten there a couple times, and they have great service. Want to go with me?”

I used the first-person voice -- the words I, I’ve, and me. It would sound really weird if I said to you, “Neil is aware of a good sushi place. He has eaten there a couple times with optimal results. He is inviting you to go with him.”

Don’t be afraid of writing in the first person. The third person voice, in which you refer to “the author” or avoid all references to the self, is dry and awkward.

Good writers use a literary device known as “foreshadowing” to hint at what’s coming ahead in a story. They’re not giving away the plot. Instead, they’re setting the reader up for what’s going to come.

Foreshadowing helps increase the excitement and anticipation in a story. In The Lord of the Rings, Gandalf foreshadows Gollum’s role in the narrative when he says, “My heart tells me that he has some part to play yet, for good or ill, before the end.”

Readers will notice Gandalf’s prediction and think, “What’s going to happen? Will Gollum do good or will he do ill?” And so they keep turning the pages.

I often foreshadow in my articles by previewing what I want to communicate and the outcome of the article. I foreshadowed the content to this article when I wrote “There are some powerful antidotes to boring content. In this article, I’m dishing up some of my favorite.”

I even promised a benefit for good measure:  “After you read this article, go write one of your own. If you follow these tips, you’re article will be at least 817% more interesting.”

Foreshadowing is nothing more complicated than pointing in the direction you’re taking your article. It helps to prevent boredom by promising the direction of the article.

A transition is a signal that you’re about to switch directions.

Sometimes, writers abruptly veer from one topic straight to another. The reader, unprepared for the transition, mentally falls off.

Transitions keep this from happening.

The easiest way to create a transition is through visual cues -- big headlines, numbered lists, that sort of thing. My best transitions are created through header tags. However, you should also create some transitions in the copy itself, especially if you’re gearing up to make a new point.

It can be as simple as something like this:

We’ve dealt with the importance of transitions. Now, let me show you how clarity can also make you interesting."

Some publications don’t use headings. Writers for The Atlantic, for example, must use transitions in order to maintain the flow of their articles.

The image below shows a transition paragraph in an article. 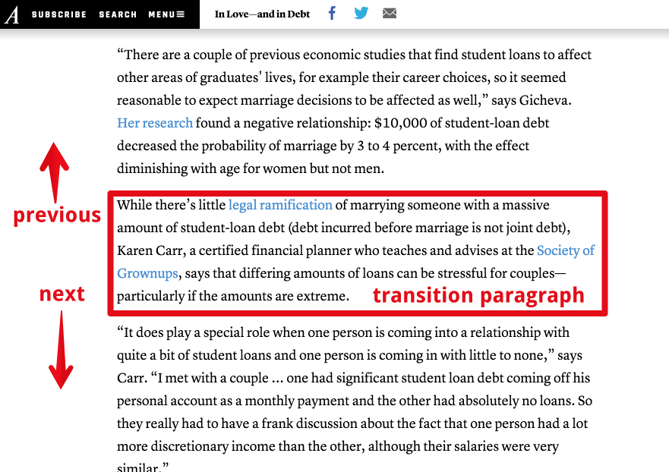 Transitions are simple, easy, and a quick way to keep your readers interested and engaged throughout the course of the article.

If I had to distill this entire article to one powerful point it would be this: Be clear.

You become interesting by being clear. Clarity is saying what you need to say -- nothing less, nothing more. It’s about using the right words in the right place. It’s about cutting out stuff that distracts. It’s about being plain, not fancy.

If you can be clear, you will be more interesting. It’s that simple.

Some people get way too worried about word count.

Word count doesn’t matter as much as you think it does. The only people truly worried about word counts are people who get paid per word and some editors.

You’re probably not going to copy/paste this article in wordcounter.net to find out how many words I wrote. Why would you care?

You care whether or not this article is helpful. If it’s helpful, you’ll spend the seven or eight minutes reading it.

If I needlessly make this article long, you’ll lose patience. I only need to make my point and stop in order to be interesting.

Extra verbiage is boring. If you don’t need to say it, don’t.

8) Don’t be shorter than you should.

Content length is a two-edged sword. No, you shouldn’t be too long. But yes, you need to say enough.

Brevity is a virtue in writing, but you still need some flow in your narrative. If you pare down the article to its bare bones, it becomes an outline, not an article.

I don’t know about you, but I don’t find that outlines are particularly powerful reading material.

I try to write short sentences. Why? Because people get lost in long sentences. Try this one:

Knowing that millions of people around the world would be watching in person and on television and expecting great things from him -- at least one more gold medal for America, if not another world record -- during this, his fourth and surely his last appearance in the World Olympics, and realizing that his legs could no longer carry him down the runway with the same blazing speed and confidence in making a huge, eye-popping leap that they were capable of a few years ago when he set world records in the 100-meter dash and in the 400-meter relay and won a silver medal in the long jump, the renowned sprinter and track-and-field personality Carl Lewis, who had known pressure from fans and media before but never, even as a professional runner, this kind of pressure, made only a few appearances in races during the few months before the Summer Olympics in Atlanta, Georgia, partly because he was afraid of raising expectations even higher and he did not want to be distracted by interviews and adoring fans who would follow him into stores and restaurants demanding autographs and photo-opportunities, but mostly because he wanted to conserve his energies and concentrate, like a martial arts expert, on the job at hand: winning his favorite competition, the long jump, and bringing home another Gold Medal for the United States, the most fitting conclusion to his brilliant career in track and field.

Did you get that? Sure you did. You probably remember the name of the runner -- Carl Lewis. You probably got the idea that he competed in the Olympics.

But what a sentence! After you read it, you find yourself panting with mental exhaustion.

Reading a sentence is like holding your mental breath. You can only last so long before you start to pass out.

Shorter sentences help readers take lots of breaths -- and that keeps them interested.

Ever heard of the wall of text?

If you've read this far, you've definitely seen one. Just look at that pull-quote above. Not only is it impossible to read, but it's also immediately intimidating to look at just because of how many lines it occupies on this page.

Don’t use a wall of text.

You can write the most fascinating content on the planet, but if you don’t break it up into chunks, people will think it’s boring.

Why? Because visual presentation matters. The brain process written information visually and spatially, not just textually.

Font, kerning, line spacing, paragraphs, heading, numbers, bullets -- all of these are part of being interesting. They help a user to absorb the information and stay connected.

Great writing isn’t as much about your sizzling hot style as it is about simple technique and a natural approach.

When you go to write your next article, just be natural. You’re not writing for your English teacher. You’re writing for me, for your user, for normal people who just want to read simple stuff.

Don’t try to impress us. Just try to get your message across clearly.

What do you do to create interesting blog articles?