How the HubSpot Content Team Overcame the 'Pivot to Video' 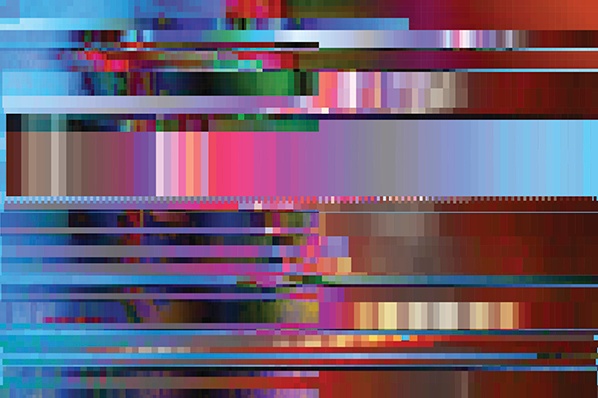 You've probably heard. 2017 was the year of the “Pivot to Video.” Publishers decreased or entirely scrapped their written editorial operations to focus on creating video. And right on cue, the internet erupted with opinions (and a fair amount of panic) on the shift.

People began asking: Are writing skills still worth it? Will this shift to video last? And how hard is it to learn video anyway?

Some of the panic was warranted. Talented writers from MTV News, Vox Media, and the like were losing their jobs. Meanwhile, publishers were scrambling to find their next viable business model.

The motivation behind the movement was two-fold: money and time. Publishers can charge more for video advertising than banner ads in text-based articles. It’s simple math. But it’s also about where and how people spend their time online. According to HubSpot Research, 54% of consumers want to see more video from businesses and brands. With more consumers turning to video, media outlets and social networks began prioritizing content that kept viewers on-site.

The Post-"Pivot to Video" Reality

So now that this "pivot to video" buzz has largely subsided (at least until the next major Facebook algorithm change, am I right?), where does the future of content stand? One thing is certain, consumers are not abandoning written content completely. While people may be consuming more video content than ever before, the popularity of video content and written content aren't mutually exclusive.

But that doesn't mean we should ignore this "pivot to video" either.

Here on the HubSpot content team, we wanted to take on the shift, responsibly. We had a dream to create high impact, editorial videos to (1) make our campaigns more interesting, and (2) create content in the format people were increasingly consuming.

So, over the the past year we did just that: Demystify the “pivot to video” by transitioning a small team of writers who enjoyed consuming great multimedia content into a team that actually created that content.

Not bad. While the past year has had it's fair share of trashed scripts and late-night tutorial binging, our content team was able to create some of the highest performing videos for HubSpot in 2017. Overall, we created 30+ videos and brought in over a million views … and that’s just on YouTube.

How did we do it? After a year of refining, here's our playbook for creating a high-ranking YouTube video that complements our written content strategy, not replaces it.

It's no surprise there's a lot that goes into making a video. Days or even weeks of work often translate to mere seconds. While crafting those sort of knock-your-socks-off, creative videos is the ultimate goal, there was a major hurdle we needed to tackle first: process. 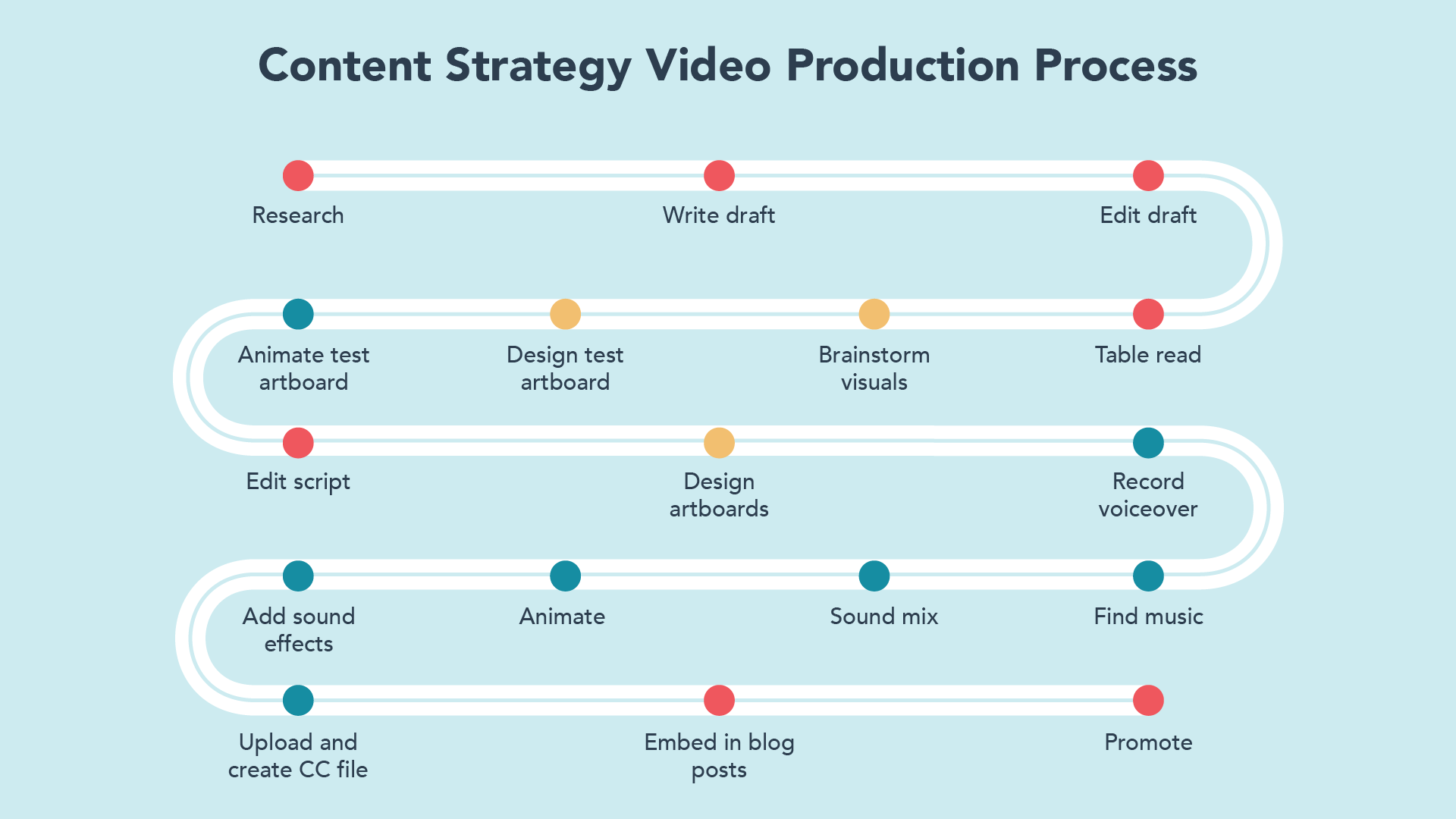 Sure, it’s pretty involved, but we’ve found that the secret to making a high-preforming video in the least amount of time is having all parties involved from the beginning. No matter if you're a writer, designer, or producer, you're in it from the start finalizing the point-of-view, brainstorming graphics, and revising the final animations.

With this spirit of collaboration established, we generally break our video process down into five key stages.

Not all topics warrant videos and it’s important to only dedicate video resources towards the ones that do. Therefore, our first step in the video process (and one that's consistently ongoing) is to identify content gaps.

Run through your high performing blog posts to find topics that could be good candidates for videos. Next, go through both Google and YouTube search results to see what information and content already exists for a topic of interest. If the topic has high search volume and is a good fit for your audience, consider making a video.

Consider our "What is Artificial Intelligence (or Machine Learning)?" explainer video. A quick keyword search for "what is artificial intelligence" told us the topic was growing in popularity fast. And after scouring the existing videos on YouTube, we began to brainstorm a storyline that would differentiate us from the pack, and ultimately, rank near the top of the list for the term.

Writing for video is drastically different than writing long-form copy. Of course, you can and should use existing research or blog structures to get your script started. But with video, shorter is usually better. We try to keep scripts around 500 words.

For example, see how our video on "The Power of Advertising Slogans" grabs the viewers attention before they have a chance to bounce.

We recommend writing scripts in Google Docs for easy collaboration with other team members. This also allows for later steps, like art direction, to begin earlier on in the process. We break our scripts into two columns with the actual script on the left and the art direction on the right. 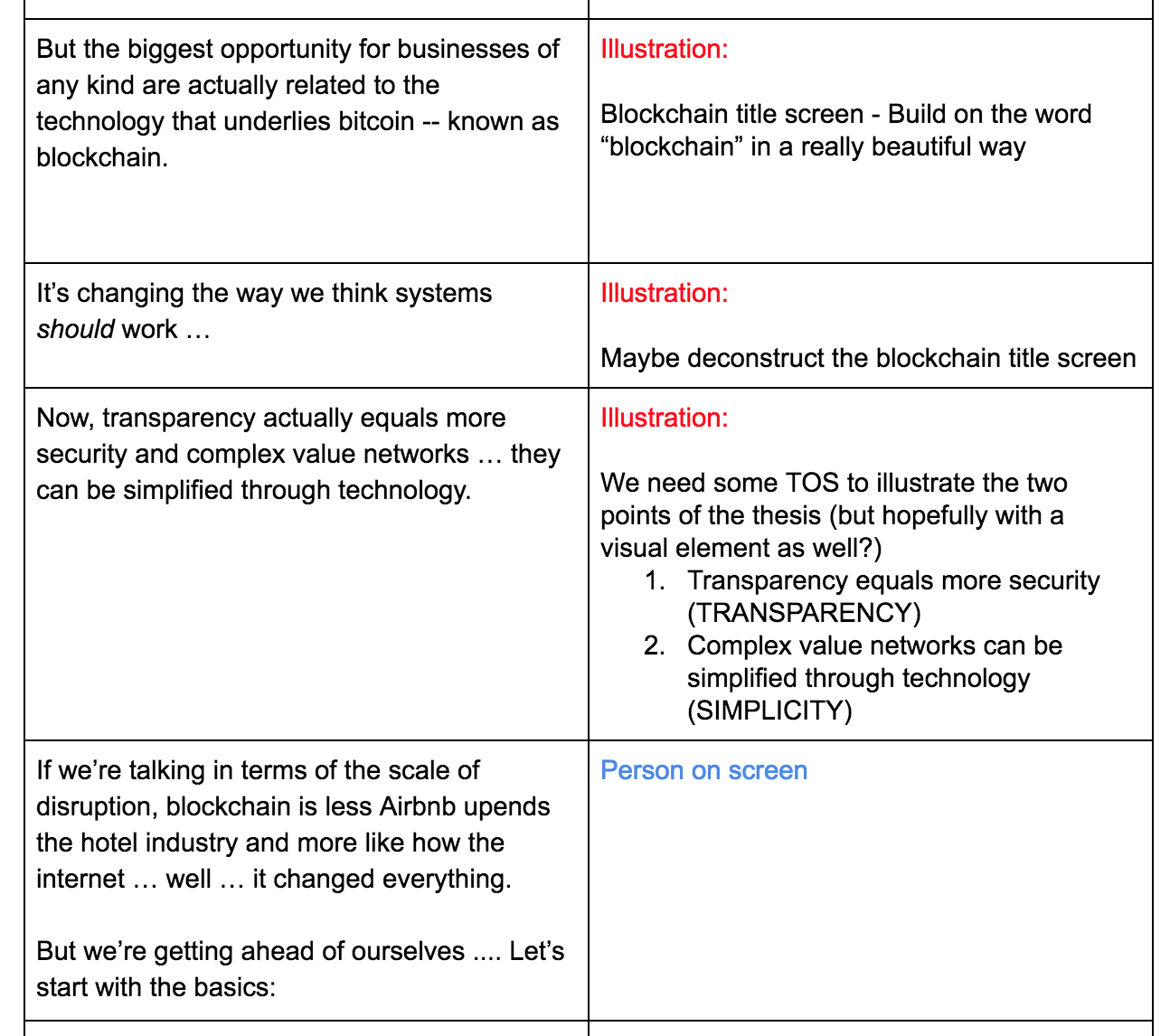 With the words on paper and art direction generally set, we move on to production. The time and work required for this step can vary greatly between videos.

Typically, the main decision we need to make is if the video will be a talking head video or an animated video. If we want to create a video to complement a blog post, we typically stick with a talking head. These are low-budget quick wins and generally can be completed in a day or two. On the other hand, animated videos can take multiple weeks to create, but lend themselves well to more complex topics that need to be explained with visuals.

Talking head videos are filmed in our studio with the help of a three-point lighting setup and an iPad teleprompter. Don't have a dedicated studio? Be sure to check out our Ultimate Guide to Video Marketing for some unexpected tips, including transforming that spare conference room into an ideal video production room.

For animated videos, we start by spending a day or two on art direction. Here, visual ideas get added to the right column of the script. Our designer can then take those ideas and design out a set of artboards using Adobe Illustrator or Photoshop.

Meanwhile, we record a voiceover of the script. All you need is a basic microphone, your laptop, and a few deep breaths to calm the nerves. Remember, it's best to remain conversational as opposed to sounding to sales-y.

Although video requires a large time commitment, we can assure you that you don’t need a Superbowl ad budget to get started. Check out this chart for equipment you can buy on any budget:

You have your footage, audio, and designs. Finally, it's time to bring everything together. For talking head videos, use Adobe Premiere Pro, iMovie, or another equivalent video editor to cut and arrange the footage.

If you're looking to take on animated videos, this stage will claim most of your time. We bring our videos to life with the help of Adobe After Effects and Animate, a process that can take one to three weeks. If you have a dedicated video editor or animator on your team, you’re all set! If not, you’ll need to invest in freelance talent or training up your own willing colleague with the help online tutorials. We've found great success of School of Motion, Lynda, and Skillshare.

More and more we are combining the talking head and animated videos to solve for efficiencies while keeping our creative standard high. Check out our explainer video on the Internet of Things to see how we split up an engaging script between talking head footage and quirky animations.

Once video production and editing starts wrapping up, it’s time to come up with a promotional strategy and get your video ranking on YouTube. Including relevant keywords in your video title, uploading closed captions, and including your script in the description box are easy ways to optimize your video for search.

We also embed our videos in relevant blog posts and site pages to help drive organic views. If you need to boost your views, consider putting money behind your video. A few hundred dollars can go a long way on YouTube. Finally, be sure to promote your videos on your other social channels to help drive engagement.

Although video production requires some upfront costs and can have a steep learning curve, we don’t see this trend disappearing any time soon. Businesses that wish to drive engagement should consider making video a part of their marketing strategy.

What Video Marketers Can Learn from 5 Memorable Australian Commercials

7 of the Best Promotional Product Videos Ever