13 Fun (Not Cheesy) Ice Breaker Games Your Employees Will Enjoy 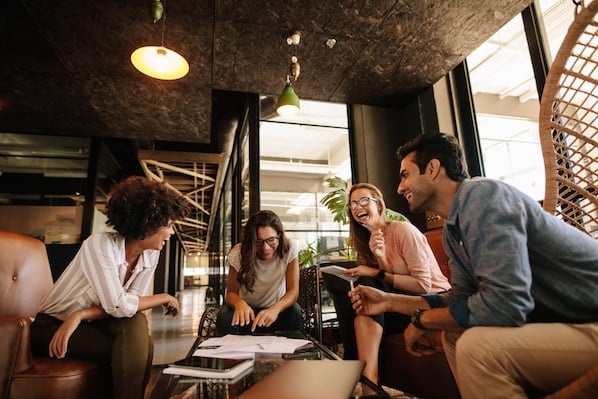 Asking "How is everyone?" at the beginning of every meeting isn't always the best way to encourage connection and team bonding. Sometimes, you need to take it a step further with an ice breaker.

The best ice breakers have the power to strengthen coworker bonds, stimulate better brainstorming sessions, and create an atmosphere of inclusivity. But it's easier said than done, and the wrong ice breaker questions can lead to awkwardness or even increased tension.

To get the most value out of your team bonding moments, we've compiled a list of the best ice breaker games for the workplace. Next time you get together with your team, use one of these games instead of asking "How is everyone", and you're sure to hear some better, more insightful responses than "I'm good."

The One Word ice breaker allows you to provide initial context into a meeting's topic, and get everyone in the right mindset for discussion.

To play, you'll want to divide meeting participants into smaller groups. Then, tell them to think for a minute or two, and then share with their group one word that describes X.

For instance, let's say you're leading a meeting on culture. Tell the groups to describe work culture, or your office culture in particular, in one word. Once they've shared with their groups, you can invite them to share their word with the entire room.

This game encourages everyone to think about a certain topic in smaller groups ahead of time, which could increase participation during the meeting.

To successfully loosen everyone up and get them in the right mindset for a meeting, you might consider putting a short Pop Quiz on the board.

If your goal is simply to encourage team bonding, your quiz can be more fun -- like, "Match the lyrics with this 80's song". However, you might also use the Pop Quiz as an opportunity to introduce participants' to the meeting's theme.

If you're discussing company changes, for instance, maybe you'll start by quizzing team members on company history facts (i.e. "What year was this company founded?").

Place a map and a set of pins at the front of a large conference room before a big meeting. As people walk in, ask them to place a pin where they were born or raised.

As the map fills up with pins, people will learn about how diverse their teammates might be. Allow some time at the end of the meeting for your colleagues to walk up and look more closely at the map.

A classic game played at summer camps everywhere, "Would You Rather" is actually an excellent, quick ice breaker for the workplace. Next time you're settling into a meeting or team bonding outing, take turns going around the table and asking each person a "Would You Rather" question.

Here are a few "Would You Rather" questions to get you started:

18 & Under is an engaging and unique way to encourage team members to share fun or interesting stories with one another. Before a meeting, simply go around the room, and ask each person to share one accomplishment they had before they turned 18.

Undoubtedly you'll get some of lesser importance, like "I bought a skateboard," but you never know what hidden skills you might discover in your colleagues.

One of the more classic ice breakers in the list, Two Truths and a Lie can be used anywhere from family parties to company events. To play, you simply ask each person to brainstorm three "facts" about themselves -- two of the facts will be true, and one will be a lie.

For instance, I might say, "I once auditioned for the TV show Zoom. I have three brothers. I ziplined in Switzerland once." Coworkers can take turns guessing which is the lie. (FYI, I have two brothers, not three, so that's the lie. Unfortunately, I did audition for Zoom.)

Two Truths and a Lie is a fun and engaging game, and more importantly, it can help your team learn facts about one another, so they can begin forming deeper bonds.

Asking fun questions is an easy and effective ice breaker game. To play, simply go around the room and have each person provide an answer to a fun question. The questions are up to you, but if you're stuck, here are a few ideas:

These questions serve two purposes -- first, they allow your coworkers to get into a sillier, more creative mindset. Second, they encourage conversation on topics typically reserved for outside the office, which enables members of your team to get to know one another on a deeper level.

This ice breaker can promote team bonding, and it's one of the easier options in the list. Simply choose a brief personality quiz on your phone or computer (if you're stuck, here's a list), and pull it up on a projector or send the link to everyone.

Once everyone has completed the personality assessment, have each colleague mention one thing they agree or disagree with in their results. This game allows your team members to gain a new perspective on their peers, and it's also a fun and easy way to get an interesting conversation started.

Have everyone write a unique, strange, or unexpected fact about them on a piece of paper. Then, put the pieces of paper into a hat and mix them around. Pull from the hat and read each fact.

Allow the team to try and guess who wrote it. After they guess, ask the employee who wrote the fact to identify themselves and give any further context if necessary. This could be a great way to get to know surprising new things about your teammates.

Tom Wujec, a business visualization expert, initially presented his Marshmallow Challenge at TED. To play, you simply divide your team into groups of four and give each group 20 sticks of spaghetti, one yard of tape, one yard of string, and a marshmallow. Whichever team can build the tallest structure, wins -- the trick is, the marshmallow must be on top.

There are a few reasons this game works as both a great ice breaker and a team-building exercise. First, the most successful teams are the groups of people who don't spend time competing for power.

The game forces your colleagues to work collaboratively when brainstorming potential solutions. Second, the Marshmallow Challenge encourages people to think quickly and offer alternative solutions when their initial idea fails.

With the Marshmallow Challenge, you can strengthen your team's brainstorming and problem-solving skills, and your team can also have some fun. A win, win.

At HubSpot, we conduct a scavenger hunt for new hires on the first day of their training. It's fun and encourages collaboration, but additionally, it can help employees learn their way around the office.

Fortunately, you can conduct a scavenger hunt for your team even if they've worked at your office for years.

Simply split up your team into groups, and give each group a short list of items to find -- if you work in a smaller space, maybe you can hide some funny items around the office ahead of time. You might even provide incentive for the winning team, like a $50 Amazon gift card.

A scavenger hunt is also an exceptional opportunity for cross-department interaction. Consider reaching out to managers' from other departments, and creating groups of employees who don't often get to work together.

This game is simple and meant to energize your team. Get your colleagues in a circle and ask one volunteer to sit or stand in the middle. Tell the volunteer that they can not laugh or smile, regardless of what happens. Then have each other colleague take turns telling the volunteer a work-appropriate joke.

This icebreaker can be helpful in new-employee or management training to lighten the pressure of starting a new job. It can also be helpful as a way of lightening the mood on teams that regularly deal with stressful projects or situations.

13. This is Better Than That

Aside from being a fun team activity, this might be great energizer for sales employees or others that regularly pitch, market, and sell products.

Ask your team to find four to seven items around the office and bring them to one room. These items could be something they use daily, like a pen or a chair. However, you should encourage them to find items that are more odd or unique. This will make the game more challenging.

Line the items up and split the group into sub-teams. Task each team with picking an item they would use to survive if stranded on a dessert island.

Tell team members that they cannot pick more than one and must assume it is the only item they will have on that island. Allow the teams time to deliberate and then ask them to present the item they chose and why.

Which Countries Get The Most Time Off Work? (Interactive Map)

The 4-Minute Guide to How Biweekly Pay Works

How to Write a Job Description That Attracts Awesome Applicants