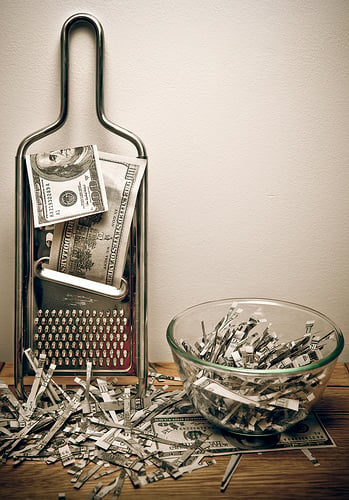 When it comes to evaluating price, most of us don't have a clue what we're doing. According to Priceless author William Poundstone, much of our strategy boils down to "just winging it," and that's not an effective way to do business:

“People tend to be clueless about prices. Contrary to economic theory, we don’t really decide between A and B by consulting our invisible price tags and purchasing the one that yields the higher utility. We make do with guesstimates and a vague recollection of what things are ‘supposed to cost.’”

How can you stay ahead of the curve and price your offerings the smart way? The answer is to rely on rigorously tested behavioral psychology research. Today, I'm going to do some of the heavy lifting for you, and below you'll get a breakdown (in plain English) of some of the worst pricing mistakes you can make, informed by some of my favorite research studies on pricing. Let's begin!

Chest-thumping about your low prices can actually hurt your chances of persuading customers if you do it the wrong way. According to new research from Stanford University, outright asking customers to closely compare your prices against a competitor (without a solid case as to why they should) can decrease their trust in you. According to the lead researcher of the study, “The mere fact that we had asked them to make a comparison caused them to fear that they were being tricked in some way.” With comparative pricing, consumers may decide not to buy at all or to minimize what they perceive as a heightened risk, instead of following the advice that the marketer/sales person had in mind.

The thing to keep in mind here is that this only applied to "explicit comparisons," or when customers were outright asked to compare prices. Many customers make "implicit comparisons" when evaluating their options, but marketers should be wary of triggering customers to think about a competitor's price, and should instead sell to customers based on the value their product provides.

Why do bargain beers like Miller Lite have slogans like "It's Miller Time!" instead of emphasizing their low prices? According to research from Stanford professor Jennifer Aaker, that would be a horrible pricing strategy to pursue. Her study found that in many instances, customers had more positive memories when they were asked to recall past time spent with a product rather than recalling the money they saved. According to Aaker, “Because a person’s experience with a product tends to foster feelings of personal connection with it, referring to time typically leads to more favorable attitudes -- and to more purchases.”

In additional research published by the Wharton Business School, Aaker and her colleagues were able to show that when prices were already low for an item, the best way to invoke positive thoughts about the product was to remind customers of the time they enjoyed with it or the time they saved by investing in it. Think of it this way: Does Miller Lite want you thinking about how cheap their beer is, or do they want you to recall a hot summer's evening you enjoyed by drinking cold beers with good friends? When you're selling bargain products, it's ideal to invoke these positive moments in time, rather than trying to sell customers on your already low prices.

3) Not Trying Out an Old Classic

Does ending your prices with the number 9 really work so well that companies should keep doing it? Isn't it trite and overdone by now? According to research from Quantitative Marketing and Economics, the answer is a resounding no. Prices ending in the number 9 were so effective, they were actually able to outsell lower priced goods. The study compared price points such as $39 and $34 for items of clothing, and the researchers were shocked to find that the $39 dollar price point actually outsold the cheaper price point by 24%.

One has to wonder… is there anything that can outsell the number 9? According to the study, sales prices ("Was $50, now only $35!") were able to beat the number 9 in almost all cases. There's only one problem ... combining sale prices + the number 9 was the best performer of all! So in the following two forms of pricing:

... the second version actually performed the best of all, even though it was being sold at a higher price. Avoid using the number 9 at you own risk, I guess!

4) Not Incorporating the Power of Context

When is one Budweiser worth more than another? Logic says that since they're the same product, the answer should be never, but this research study in New York Times Magazine proves that this just isn't the case. Researchers found that customers were more willing to pay higher prices for the same type of beer when it was sold from an upscale hotel than when it was sold from a run-down grocer (despite the fact that the beer was exactly the same). The lead researcher Richard Thaler was surprised that consumers had no objections to the higher prices when asked what they would pay.

What does this mean for you? Your prices can be raised by simply changing the context in which you're selling. I've noted in a previous article on raising rates that the very moment I started calling myself a "content strategist for software startups" rather than a generic title of "freelance writer," I was able to double my standing rate for client work. Are you selling products, or full-feature solutions? Is your ebook for sale, or is your complete training toolkit available for customers and ready to solve all their problems? These wording choices may seem trivial, but on the web they're often your best way to express your product's value; and as we've seen from the research, part of your product's value is based off of the context in which customers view it.

One of the biggest mistakes that business owners can make is not offering enough price points. In particular, not offering prices that are high enough for super-users. Consider the following study from the book Priceless. Researchers conducted tests by using different prices of beer, starting out with just two prices and then shifting over to three. First, they started with a “regular” beer at a $1.80 price point, and a premium beer at a $2.50 price point, and measured the percent of people who bought either beer. This was the result of their first test (images by Nathan Barry):

As you can see, most people chose the more expensive option, which is a good thing for your overall revenue. The researchers then decided to see what would happen when they introduced a third price point into the equation. In this case, the third price was a bargain price, and was priced lower than the $1.80 beer and instead set to $1.60. Here were the results of this new test:

Not good! Adding the third price actually encouraged people to buy the middle price more often than not, decreasing overall revenue. But this study isn't over yet! Researchers then decided to take out that bargain beer and add a super-premium beer priced at $3.40. Here are the results from the final test:

As you can see, the final test performed the best of all, with slightly more people purchasing the "standard" beer, but with the added advantage of people now buying the super-premium beer as well, adding to overall revenue. The takeaway here is that you should be wary of anchoring your prices by introducing too many lower price points, but that you may be able to take advantage of the fact that many of your users will be perfectly fine paying for a higher price point as long as it offers a premium experience.

No matter what you're selling, according to neuroeconomics experts, you're always selling to the 3 types of customers that are out there: tightwads, unconflicted buyers, and spendthrifts. In this study from Wharton Business School, researchers break down the differences between these three as follows:

Since previous research has shown that people will literally "spend 'til it hurts," these categorizations are based on the ability of certain people to bear the "pains" of buying something. But since nearly a quarter of your potential customers could be conservative spenders, you should understand how to properly reduce friction to be able to better sell to those "tightwads." According to the Wharton research, the following tactics work quite well:

1) Reframe your product's value. We all struggle with large numbers; they just aren't as easy to digest as smaller amounts are. That being said, "tightwads" have a really hard time evaluating potential value for long-term expenses. Here's an example: if I told you my service would cost $1000/year, you'd be a bit hesitant to buy, right? Right, that's because $1000 isn't pennies. What if, instead, I told you my product was $84/month? You'd be able to see (much more easily) if the $84 gave you enough value each month to justify a purchase. The thing is, those two price points are actually the same amount overall! For tightwads, though, being able to evaluate price on this smaller time scale has been shown to make them much more likely to buy. Referencing the cost of your product in smaller time spans can definitely help increase sales if you have a lot of conservative spenders.

2) Emphasize value at every turn. In what I've dubbed the "silliest bump in conversions ever," the CMU studies (cited above) successfully revealed that changing the description of an overnight shipping charge on a free DVD trial offer from "a $5 fee" to "a small $5 fee" increased the response rate among tightwads by 20 percent! Let's look at that change side by side, to point out how absurd it is:

The research shows us that tightwad spenders pay close attention to these details, and are more prone to be persuaded by reminders of "small fees" than spendthrifts, who likely don't care about the fee at all. With a 20% increase in conversions by adding a single word, you need to be sure that your copy speaks to tightwads by emphasizing small fees when they are small, and by pointing out other details that frame the price as less inexpensive. Remember, while it may be obvious to you, these reminders make more cautious spenders much more likely to buy.

This is one of the most surprising studies on pricing that I've ever come across. According to a recently published research paper from the Journal of Consumer Psychology on behavioral economics, researchers found that prices that contain more syllables when spoken seemed drastically higher to customers. What does that mean exactly? Compare the prices of:

They all mean the same thing, right? That's right. But according to the study, the subjects felt both the first and the second example were much higher than the third. Despite the fact that the prices were the same value, when the extra syllables (and commas) were added into the pricing, it felt like a higher cost to those in the study. According to the researchers, this phenomenon occurred even when the prices were not stated out loud, meaning that reading the price aloud in their head was enough to make it feel more expensive.

What does this mean for you? Ideally, you'll avoid any and all "unnecessary" additions to your pricing's structure. It may seem silly, but the research has shown us that you should have a "$2500" product rather than a "$2,500.00" product, despite the fact they represent the same cost.

Gregory Ciotti is the marketing strategist at Help Scout, the invisible support ticket system that makes email support a breeze for you and your customers. See how Help Scout can help your business by checking out our free email support software guide.