The Engagement Ring Story: How De Beers Created a Multi-Billion Dollar Industry From the Ground Up

One of the biggest assets in a married couple's relationship, the diamond engagement ring, might be an emotional asset and a symbol of love and commitment -- but in the financial sense of the word, it isn't actually an asset at all.

In fact, it's worth at least 50% less than you paid for it the moment you left the jewelry store. Makes you wince a little, doesn't it?

And yet, we feel compelled to buy them for our loved ones anyway. Heck, I still want one even after writing this article. How did that become the norm? It's hard to imagine that it's only been three-quarters of a century since diamonds became the symbol of wealth, power, and romance they are in America today -- and it was all because of a brilliant, multifaceted marketing strategy designed and executed by ad agency N.W. Ayer in the early 1900s for their client, De Beers.

Over the course of a few decades, N.W. Ayer helped De Beers successfully turn a failing market into a psychological necessity, all during a period of war and economic turmoil.

How exactly did N.W. Ayer convince Americans that diamonds are the ultimate symbols of love, romance, and marriage? What were the marketing campaigns that turned the diamond industry around -- and were they morally sound?

De Beers' 80-year stronghold on the diamond industry was one of the most impressive and fascinating in history. Let's take a critical look at how the company used marketing to create and manipulate demand for diamonds from nothing.

How It All Started

Diamonds haven't been rare stones since 1870, when huge diamond mines were discovered in South Africa. Soon after the discovery, the British financiers behind the South African mining efforts realized the diamond market would be saturated if they didn't do something about it. So in 1888, they set two audacious goals:

1) Monopolize diamond prices. They succeeded by creating De Beers Consolidated Mines, Ltd. and taking full ownership and control of the world diamond trade. While they stockpiled diamonds and sold them strategically to control price, De Beers Chairman Sir Ernest Oppenheimer cultivated a network of wholesalers all over the world.

2) Stabilize the market. To succeed here, De Beers would have to figure out a way to control both supply and demand for diamonds worldwide. For this, they would need to find an ad agency.

When De Beers began looking for an ad agency, the global economy was suffering and Europe was under threat of war. Their challenge was to figure out which country or countries had the most potential to support a growing diamond market, and then to hire an agency to implement a marketing campaign in those countries. Because of Europe's preoccupation with the oncoming war, the U.S. was chosen -- even though the total number of diamonds in the U.S. had declined by nearly 50% since the end of World War I.

The Birth of a Vision

De Beers chose N.W. Ayer because of their ideas on conducting extensive research on social attitudes about diamonds, and then strategically changing them to appeal to a wider audience.

N.W. Ayer did exhaustive market research to figure out exactly what Americans thought about diamonds in the late 1930s. What they found was that diamonds were considered a luxury reserved only for the super wealthy, and that Americans were spending their money on other things like cars and appliances. To sell more and bigger diamonds, Ayer would have to market to consumers at varying income levels.

So, how do they get more people to buy big diamonds in a bad economy? They needed to figure out a way to link diamonds with something emotional. And because diamonds weren't worth much inherently, they also had to keep people from ever reselling them. What was emotional, socially valuable, and eternal? Love and marriage. Bingo.

According to New York Times, N.W. Ayer's game plan was to "create a situation where almost every person pledging marriage feels compelled to acquire a diamond engagement ring."

The concept of an engagement ring had existed since medieval times, but it had never been widely adopted. And before World War II, only 10% of engagement rings contained diamonds. With a carefully executed marketing strategy, N.W. Ayer could strengthen the tradition of engagement rings and transform public opinion about diamonds -- from precious stones to essential parts of courtship and marriage. Eventually, Ayer would convince young men that diamonds are the ultimate gift of love, and young women that they're an essential part of romantic relationships.

The agency wanted to make it look like diamonds were everywhere, and they started by using celebrities in the media. "The big ones sell the little ones," said Dorothy Dignam, a publicist for De Beers at N.W. Ayer. N.W. Ayer's publicists wrote newspaper columns and magazine stories about celebrity proposals with diamond rings and the type, size, and worth of their diamonds. Fashion designers talked about the new diamond trend on radio shows.

N.W. Ayer used traditional marketing tools like newspapers and radio in the first half of the twentieth century in a way that kind of reminds me of inbound marketing today: In addition to overt advertisements, they created entertaining and educational content -- ideas, stories, fashion, and trends that supported their brand and product, but wasn't explicitly about it. According to The Atlantic, N.W. Ayer wrote: "There was no direct sale to be made. There was no brand name to be impressed on the public mind. There was simply an idea -- the eternal emotional value surrounding the diamond." Their story was about the people who gave diamonds or were given diamonds, and how happy and loved those diamonds made them feel.

Every one of De Beers' advertisements featured an educational tip called, "How to Buy a Diamond." The instructions said: "Ask about color, clarity and cutting -- for these determine a diamond's quality, contribute to its beauty and value. Choose a fine stone, and you'll always be proud of it, no matter what its size."

The agency saw tremendous success from their early campaigns. In just four years between 1938 and 1941, they reported a 55% increase in U.S. diamond sales. Riding this success, N.W. Ayer began perfecting their marketing strategy in the 1940s. They wanted to convince Americans that marriages without diamonds were incomplete.

"A Diamond Is Forever"

These four iconic words have appeared in every single De Beers advertisement since 1948, and AdAge named it the #1 slogan of the century in 1999. 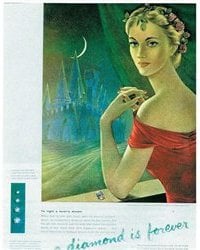 According to a New York Times article, the woman behind the signature line (Frances Gerety, who wrote all of De Beers' ads from 1943 to 1968) came up with it right before bed one night after forgetting to brainstorm it earlier for the next morning's meeting. When she reviewed what she'd scribbled down the night before, she thought it was "just OK" -- and, after presenting it at the morning meeting, no one was particularly enthusiastic.

It's unclear why the slogan was chosen anyway, but it was a choice that would contribute greatly to De Beers' tremendous advertising success. Even now, the URL www.adiamondisforever.com redirects to De Beers' main website.

The slogan perfectly captured the sentiment De Beers was going for -- that a diamond, like your relationship, is eternal -- while also discouraging people from ever reselling their diamonds, as mass re-selling would disrupt the market and reveal the alarmingly low intrinsic value of the stones themselves.

At the very beginning of N.W. Ayer's campaigns for De Beers in the late 1930s, the suggested spend on an engagement ring was one month's salary. In the 1980s, De Beers ran a campaign to reset the norm to two months' salary. The ads said things like, "Isn't two months' salary a small price to pay for something that lasts forever?"

The story from the campaign stuck, and De Beers' "two months' salary rule" is still widely accepted in the U.S. today.

From the start, De Beers and their agency created and manipulated demand for diamonds by monopolizing the market, changing Americans' social attitudes, and convincing people that a marriage isn't complete without a diamond ring. So ... are diamonds the biggest scam in history, or is this a prime example of ingenious marketing?

De Beers knew their product wasn't intrinsically valuable (like gold and silver is). So instead of marketing to their product, they mastered the art of marketing to values -- in this case, the values and ethics surrounding love, romance, and marriage. No one was interested in buying diamonds when they conducted their first round of extensive market research, so they had to create that value themselves.

I recently read a short Forbes article from 2011 called "There Is Only One Way To Make Money." It's about the difference between companies who find value, package it, and deliver it to customers, and companies who create value out of nothing.

Most companies are the former, meaning they are reactive to existing value -- like when Kraft Foods, Inc. changed its marketing strategy when market research showed a consumer attitude shift away from direct promotions of junk food to children. De Beers was part of the latter camp -- their agency's market research showed a major decrease in demand for diamonds, so they executed marketing campaigns that would shift, rather than accommodate, those existing social attitudes. While brilliant and successful, it also opens up a ton of ethical concerns.

Regardless of which side you're on, De Beers is a very interesting example to learn from. It's fascinating how De Beers and N.W. Ayer created demand from nothing by coming up with a story and value proposition around their product -- and it's still successful today. Since the turn of the century, De Beers has effectively lost its monopoly of the world diamond trade, although they still bring in billions of dollars every year. But by marketing an idea rather than a product, they built a strong foundation for the $72 billion-per-year diamond industry and dominated it for a good 80 years -- and that's a story worth learning more about.

So, what do you think of their marketing over the last century? I'm curious to hear your opinions in the comments below!