An emoji is one of the most useful shorthand communication tools of the 21st century. 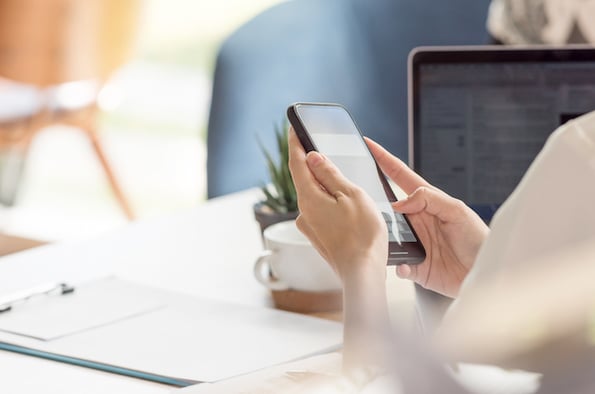 An emoji can be used to express personality in your email campaigns, or on social media. In fact, nearly half of all comments and captions on Instagram contain an emoji, and using an emoji on Twitter can result in 25.4% more engagement.

Ultimately, a properly-used emoji can make your audience smile and feel better connected to your brand.

For instance, take a look at this email I found in my inbox on Cyber Monday, from Influenster, a product review site:

Or this one, from CB Insights, a machine intelligence platform:

As you can see, emojis can take your messaging to the next level and allow you to stand out in a crowded inbox. Additionally, you can use them as a substitute for generic and overused words like "money", making your content both fresh and enticing.

But emojis can be confusing, and it's often difficult to discern the difference in meaning -- like between a "🙄" and a "😳" face (trust me, there is one).

To ensure you use emojis to properly engage and delight your audience, we've compiled a list of the most common (and confusing) emojis, with examples of how to use them for any of your marketing purposes. At the end, we'll also explain which emojis your business should likely avoid.

To start, let's take a look at some of the faces you might use to convey certain emotions, along with examples of how you might use each in your own marketing content.

You might consider using a heart eye emoji to show your love for something, whether it be a new product or a blog article you want to promote on social.

For instance, SoulCycle uses a heart eye emoji in their email subject line, to convey their approval and love for the brands they're now selling online:

This side eye emoji is most commonly used to express a smirk after someone makes a sarcastic or ambiguous joke that could seem serious, out of context. Ultimately, it's a good emoji to use if you want to demonstrate a playful side to your brand, or if you're making a joke and aren't sure whether your audience will know you're kidding.

For instance, you might playfully insinuate you understand most of your readers will be offline over the weekend, by saying in an email, "While we understand you're probably dying to do more work over the weekend 😏, we've put together a guide with suggestions for creating better work-life balance. Check it out here."

The eyes emoji is a simple and fun way to draw attention to a link or image you want to share with an audience. Instead of saying "Look at this", you might consider using the eyes as a silly substitute.

For instance, take a look at how GREATS, a footwear brand, uses the eye emoji to elicit excitement and suspense over an upcoming release: 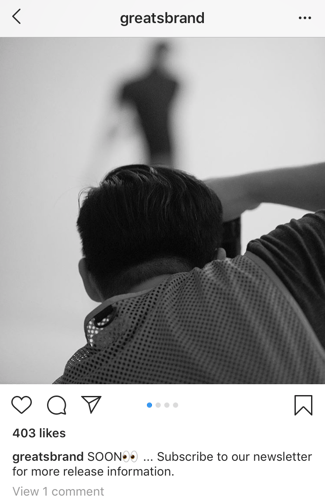 In this case, the eye emoji playfully suggests to the audience, "Keep an eye out -- something new is coming soon".

The flushed face emoji is a fantastic opportunity for your brand to demonstrate humility or gratitude for an achievement or award.

For instance, you might show the flushed face if you're sharing an article that lists you as a top company in your industry. Perhaps you'll tweet, "So grateful to have made it on Company A's list of Best Workplace Culture of 2018 😊 Thank you!"

The thinking emoji is often used to demonstrate someone deep in thought, or pondering the validity of something. It can be used to express a level of doubt, like "Hmm … not sure about that", in regards to a controversial issue.

For instance, take a look at how Monday.com responded with integrity to a Facebook user who questioned whether Monday.com bought fake social media likes: 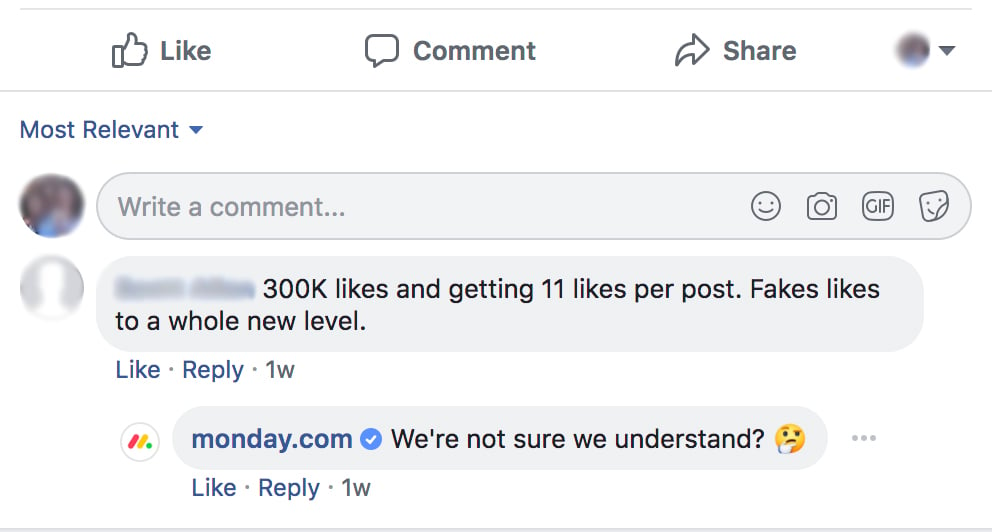 Rather than fighting with the user, Monday.com took the high road and used the thinking emoji to express a level of doubt over the accuracy of the user's statement.

Alternatively, you might use the thinking emoji after a question or poll on social media, simply to create a visual that indicates you want your audience to think about something.

The smiling emoji with a sweat droplet is typically used to express a close call -- while the sweat depicts a level of discomfort, the smile alludes to someone who's thinking, "Phew! That could've been bad."

For instance, if your coworker emails you moments before a meeting with an urgent, "Wait, where's the most recent reporting deck with all our statistics?" You might send the deck back with a "Don't worry -- got it, right here 😅" response, alluding to the satisfaction you both feel over averting an issue.

Typically, businesses use the hand up emoji to suggest a level of enthusiasm or participation, like "Sign me up!" For internal purposes, you might use the hands up emoji to get a headcount of people willing to help out.

For instance, if you see your team leader is asking for volunteers to pass out microphones during the next company meeting, you might send back a simple "🙋‍" as your response.

Alternatively, you might use the hand up emoji to ask whether your social media audience agrees with you. For instance, you could post on Twitter, "Who thinks skittles are better than m&m's? Give me a 🙋‍if you agree!"

Allegedly 2017's most popular emoji in the U.S., the laughing emoji is one of the easiest ways to express humor or amusement. Oftentimes, when a coworker makes a joke in a slack channel, I'll use the " 😂" emoji as an alternative to "haha" or "lol".

Additionally, the laughing emoji is an effective opportunity to demonstrate your brand's sense of humor. For instance, Honest, Jessica Alba's company that creates safe and natural products for the household, uses the laughing emoji in this Instagram post: 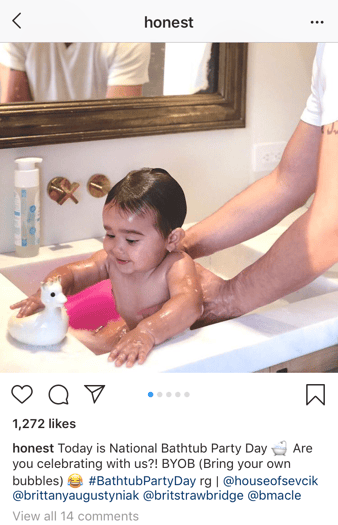 In this instance, Honest demonstrates an ability to laugh at themselves and their own cheesiness (with their attempt to re-define BYOB's acronym meaning) -- and makes them seem more human, as a result.

Along with faces, emojis offer your business the opportunity to use objects or symbols to express meaning, such as the heart symbol (❤️), a check mark (✔️), or a taco (🌮).

The hiding monkey face emoji is a cute opportunity to express a level of shyness or embarrassment. For instance, your brand might use the monkey emoji after making a mistake, like this -- "Hope you enjoyed our tool, even though it didn't work the first time 🙈."

Alternatively, you might use the hiding monkey face emoji to suggest you wish you hadn't seen something. This can be humorous, particularly if you share a funny prank video with a "Yikes, that was rough 🙈" caption.

As you might've guessed, the nail polish emoji can be used to demonstrate a level of casualness or indifference. Some people believe it means "I'm prettier than you", or an expression of arrogance or confidence, but typically, it isn't used for any other reason than to articulate nonchalance or relaxation.

For instance, I might use the nail polish emoji to engage an audience, by writing -- "This weekend is all about rest and relaxation 💅😊 What are your weekend plans? Leave them in the comment section, below."

HubSpot often uses various hand emojis to express emotion simply and effectively. For instance, the 👌 expresses the same message as it does in real life -- "that's a-okay," or "fine by me".

The clapping hands (👏) can be used to express congratulations or excitement, such as "Congrats to @CForsey on winning our giveaway contest👏!".

Finally, the "👈🏿" pointing finger emoji is effective for pointing at a link. Particularly when there's a word limit, it's a good idea to use the pointing finger instead of writing, "Check out this link".

The waving emoji is a playful yet simple way to say "Hello" or "Goodbye". Consider incorporating it into your welcome email to display a level of warmth to your new subscriber.

Alternatively, you might use the 👋 emoji to playfully introduce your audience to a new product or service. For instance, Drop uses the 👋 in their email subject line to introduce its email subscriber's to Drop's new app:

The thumbs up is relatively universal, making it a classic emoji to use to either express your business's approval, or to ask for quick audience engagement.

For instance, you might write on Instagram, "What do you think of our new company logo? Give us a 👍🏾or 👎🏾". This allows your audience to engage with your brand with very minimal effort on their part.

Emojis to Avoid for Business Use

I spoke with Krystal Wu, HubSpot’s Social Media Community Manager, about her stance on emojis for marketing purposes, specifically on social media. She suggested businesses use emojis to express a level of authenticity, and choose emojis they feel align well with the tone of their brand.

However, Krystal advises businesses be wary of using strong emotional emojis, like the kissy face. She told me those types of emojis might express emotions too intense for a business's audience.

Here are a few emojis to be wary of using for business purposes, and the meaning behind them:

Typically, a kissy face should be reserved for one-on-one conversations, such as a texting conversation between you and your friend in which you say, "Great job at open-mic last night! You killed it 😘".

A kissy face, despite its innocent nature, is likely too emotionally-charged for your business to use with your audience, unless you truly believe it aligns well with the tone of your brand.

While the angry face is undoubtedly a popular emoji to use with friends and family, it's likely one you should avoid for business purposes. It is typically used to express strong disapproval or dislike for something, which is probably a negative emotion you want to avoid directing at your audience.

You should probably only use the angry face when communicating with a friend, one-on-one. For instance, you might text your friend, "Oh no! The movie is sold out 😠so mad!"

Dictionary.com defines the people with bunny ears as emojis used to express "a fun, party-loving spirit ... [and used to] communicate festive and friendly sentiments".

Ultimately, due to the ambiguous and party-loving nature of the bunny emoji, it's likely one you should avoid for your marketing campaigns.

Until recently, I thought this was an image of a woman flipping her hair. But Emojipedia.org describes her differently, as an "Information Desk Woman" who is holding out her hand, asking how she might help.

Despite the innocent intent, the hair flipping girl is often used to demonstrate sassiness, sarcasm, or even to express disrespect for someone or something (at least, in the U.S.). To avoid any risk of offending or confusing your audience, you want to avoid it in your marketing emails and on social media.