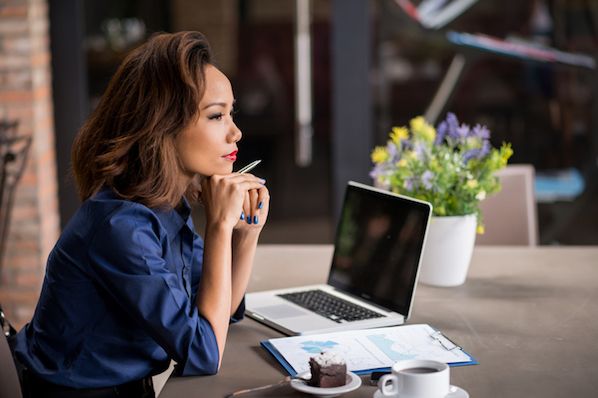 These areas of expertise give rise to "mental models," assets we're using all the time but might not realize we have.

Your coworker in sales has a different background than you, which means she can bring different ideas to the table. You might spend most of your time creating content on a daily basis, giving you a unique understanding of your brand's voice and position in the industry. Meanwhile, your coworker might spend most of her time speaking to customers, giving her visibility into what your industry really wants right now.

Put you and your sales-minded coworker in a room together, and your combined insights can crack a challenging problem.

But it's just not feasible to host a roundtable discussion every time you need to make an important decision. As individuals, we need to be able to think about our business's problems differently every time we encounter a new one.

Luckily, there's a way to hack the decision-making process and reap the "two heads" effect by yourself: mental models.

What is a mental model?

A mental model is the specific thought process you use to examine a problem. There are many types of known mental models, and each one takes a unique view of a foreign concept in order to reduce its complexity. In short, it is the mind's way of making sense of something.

A mental model is a way of examining a problem. As James Clear explains, "Each mental model offers a different framework that you can use to look at life ... If you develop a bigger toolbox of mental models, you'll improve your ability to solve problems because you'll have more options for getting to the right answer. This is one of the primary ways that truly brilliant people separate themselves from the masses of smart individuals out there."

A close friend and colleague of Warren Buffet, Munger is known for his interest in psychology. On the subject of decision-making -- primarily in business -- he suggests there are numerous mental models that can help us dismantle and solve difficult problems. Says Munger:

"You can't really know anything if you just remember isolated facts and try and bang 'em back. If the facts don't hang together on a latticework of theory, you don't have them in usable form."

It's this latticework of mental models that allows us to adjust our view of a challenge if we need to. After all, not every dilemma is presented to us the same way, or can be decided on from the same vantage point. The more mental models you experiment with, the more adaptable you'll become to the challenges that come your way.

So, where do you even begin to build your own "latticework" of mental models? Take a look at some of the most common mental models below -- a few of them you might be practicing without realizing it.

14 Examples of Mental Models to Practice (and Avoid)

This describes the probability of something happening based on potentially relevant factors. These factors include evidence from past results and current conditions that could affect a new outcome.

Given the steady increase in your open rate over the last four months, and the fact that you removed your most inactive emails from your contact list, a realistic open rate goal under Bayes' Theorem might be 30%.

We can thank Warren Buffett for this mental model. In 1996, Buffett told his shareholders, "You don't have to be an expert on every company, or even many. You only have to be able to evaluate companies within your circle of competence. The size of that circle is not very important; knowing its boundaries, however, is vital."

Concentrate on your area of expertise, and don't be afraid to say "I don't know" when you're dealing with someone else's circle of competence.

This is a human tendency to look for and interpret information in a way that reinforces or confirms what you already believe.

For instance, if you're confident your website's organic traffic for December will exceed its traffic from November, you might focus too much on December's promising traffic level after just the first week, and not enough on the fact that the holidays later into December often cause B2B website traffic to decrease.

To protect yourself against confirmation bias, accept the idea that your perception doesn't always (or even frequently) equal reality. Challenge yourself to find different interpretations of what's happening.

In the above example, you might think, "Is there anything to suggest our organic traffic for December will drop before the month's over? What might stand in the way of our goal?"

Being more skeptical will lead you to probe more deeply for objections -- which, in turn, will help you set more realistic expectations before it's too late.

The inversion perspective is one of the most powerful mental models. Rather than thinking about your desired outcome, consider the outcome you'd like to avoid.

Then, you'd make sure to do none of those things.

As Shane Parrish says, "Avoiding stupidity is easier than seeking brilliance." While you won't always find the answer by inverting the problem, you'll definitely improve.

We're more likely to believe someone is acting a certain way because of their character than the situation.

In other words, if your social media strategist doesn't show up to a marketing team meeting, you'll probably think, "They're flakey," not "They must have gotten stuck in traffic."

Challenge yourself to give people the benefit of the doubt. Behavior is usually situational, so your predictions of how people will act will be more accurate if you don't chalk things up to "how they are."

If a marketing qualified lead (MQL) goes dark at a critical point in the acquisition process, you're probably going to assume they were "kicking tires" or decided the information they had wasn't good enough to continue the conversation. Hanlon's Razor, however, asks us to "Never attribute to malice what could be explained by carelessness." In other words, it's more realistic to assume the person is busy instead.

There are two types of envy. The productive type is "inferiority," or the desire to raise yourself up to another person's level. Do you want to become as successful as your team's marketing director? You're motivated by this kind of envy.

The unproductive type is malicious envy, or the desire to take something valuable away from someone else -- not for your own means, but so they don't have it.

These motivators are worth remembering when, for example, you're writing website copy for your online visitors. Your visitors might be personally invested in a particular goal because they want to do as well -- or better -- than another person at their company, or beat someone else's record. Identifying your visitors' desires will help you craft landing page copy that seeks to solve their personal goals.

You should also be conscious of the jealousy tendency in your own decision-making process. While a competitive streak (inferiority envy) might benefit you in a fast-moving startup, wanting other people to fail (malicious envy) will only distract you. Overcome envy by reminding yourself of your similarities to this person, which will trigger your empathy, and avoid the temptation to sabotage them. Turn those impulses into growth opportunities: What skill or habit can you improve to get their results?

This concept applies to marketing in several ways. First, make sure you're focusing on the most valuable activities. Let's say you've spent a week researching your buyer persona before launching a blog dedicated to them. As crucial as a detailed buyer persona is to your business, know when to call it complete. You're probably not going to double your results by spending another week sizing up your ideal buyer, and the more trivial the details get, the less those details will actually benefit your content. Instead, use that time to research a different buyer and establish multiple audience segments.

To ensure you spend your time on the things that offer the biggest returns, recognize what you need to know to be successful. Developing a brand voice and a series of calls-to-actions for your blog might be more productive than mastering the entire AP stylebook cover to cover.

There are diminishing returns to memorizing obscure details, and the sooner you notice them, the sooner you can jump on the projects that are more valuable to your business's growth.

A bridge might theoretically handle up to 15,000 pounds, but it would be wise to cap the weight limit at 14,000. It would be a major disaster if the bridge wasn't actually that strong -- and the risk isn't worth it.

The margin of safety is the idea that we should leave ourselves room for mistakes or failures. For instance, when creating your website's conversion goals, you might not count a downloaded ebook as a lead until they've responded to a follow-up email or sought more information from you, just in case they change their mind.

Think of this model as a safety net. It's better to be pleasantly surprised than proven right.

This principle states the simplest explanation is usually the correct one. If you're trying to understand what happened, develop the most basic hypothesis possible.

Every choice comes at the cost of another. If you decide to send emails after lunch, you can't use that time to write a blog post. If you pursue one large, unpredictable lead-generation campaign, you won't have the bandwidth or the risk tolerance to pursue another at the same time.

Keep this in the back of your mind every time you're deciding what to do. What's the alternative? Are you willing to give that up?

The Pareto Principle, also known as the 80/20 rule, means most results aren't distributed equally. In other words:

If you can hone in on your top customers, selling activities, and so forth, you'll be dramatically more successful.

At my former company, for example, we analyzed our customers and found those who spent the most (i.e., the 20% who created 80% of our revenue) worked in HR. Once we knew that, our sales and marketing teams could target HR professionals. As a result, the company's revenue increased by 230%.

Imagine two runners competing in a race. The first runner to pass the one-mile mark gets water and a protein bar. The slower one gets nothing.

This describes the preferential attachment, where the leader is given more resources than their competitors. Those resources give them an even greater advantage.

As a marketer, you see this effect in the lead-nurturing process. It can be tempting to spend all your time serving content to your most qualified leads. But in the process, you might be neglecting the people who are in the early stages of learning about your business, or take a bit more time to open their emails and download certain resources.

No matter how much you might "prefer" getting your furthest-along leads into the hands of a salesperson, it's important not to develop preferential attachment to these people at the expense of other website visitors.

Along similar lines, redundancy describes what good engineers do to put back-up systems in place to protect against failure. This drastically reduces your chances of total failure.

As a marketer, you can use this strategy to create a campaign that keeps your readers, subscribers, leads, and existing customers happy and educated while also making a bet on a brand new offering. Maybe you're promoting a huge product right now and have an ambitious lead-generation goal to hit next month. Pursue four or five smaller, low-risk content campaigns at the same time to ensure your lead-gen pipeline remains stable while also rolling out your new product.

With these mental models at your disposal, your analytical and decision making skills will exponentially improve.