How to Reclaim an Unproductive Day in 6 Steps 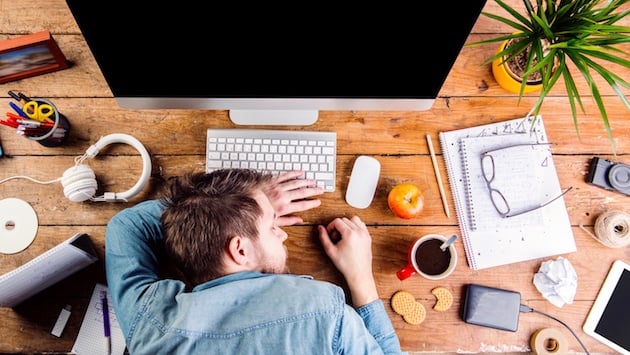 That's the sound of an unproductive day passing by. It's the sound of any day, Monday through Friday, going to waste -- where despite your best intentions, you just can't seem to get moving, or get stuff done.

It happens to all of us. Seriously.

But what's an otherwise industrious person to do when these days unexpectedly fall upon us? We've got some ideas -- six of 'em, in fact.

How to Reclaim an Unproductive Day in 6 Steps

1) Remember what's in store when you're done with your tasks.

Truth time: Sometimes, I bribe myself.

I know how silly it sounds, but it's true. If there's a task that I've been putting off, but there's also something else I've been looking forward to doing, I'll bribe myself with the latter to get the former done.

Case in point: I had a rather big piece of writing to complete over the summer, and as the clock was running out on my deadline, I was having trouble getting started. At the same time, my best friend and I were heading to Las Vegas in a few weeks, and I was really looking forward to planning the trip.

"Okay, self," I thought. "You get a draft done today, and tonight, you can start planning your Vegas trip."

It doesn't even have to be something that's a big deal, like planning a vacation. My colleague, HubSpot Senior Growth Marketing Manager Niti Shah, once told me that she pays herself in cookies and mozzarella sticks for completed tasks.

The point is, it's okay to reward yourself for progress. Just make sure the reward matches the work completed, and that you're not treating yourself to a week in Hawaii for sending an email.

This one is an oldy-but-goody. According to data collected by DeskTime, the top 10% most productive employees take 17-minute breaks for every 52 minutes of work they put in. And during those periods, they use hyperfocus: No work during breaks (that includes email), and no distractions during the work time.

I often liken this tip to boxing training. When I used to box, I had a trainer who would have me throw non-stop punches for three-minute intervals, with one-minute breaks in between. If you haven't tried it, three minutes is a long time for that kind of exercise, which makes the one-minute rest period especially important for your heart rate and muscle recovery.

In my experience, the mind works in a similar way. An hour spent on a task or a project that requires deep thinking, creativity, or number-crunching is, to me, the equivalent of a three-minute, high-intensity boxing interval. You need the recovery period. So next time you feel like your brain just can't quite throw that left hook, take a minute, and let your "intellectual heart rate" return to normal.

3) Work on something completely unrelated to your to-do list.

When I was visiting my parents for Thanksgiving -- which happened to overlap with the writing of this blog post -- my mom asked me if I could help her troubleshoot an issue on her laptop.

It was the last thing I  or thought I had time to do. It was a short week. I was taking a day off. I had a long list of things to do, and I was already taking longer to get through it than I had hoped. But it was my mom, after all, so of course, I helped.

By the time we were done figuring out the problem, for some reason, I felt reinvigorated. I had a new motivation to finish my  and finish them quickly. Sure, I had taken a "break," in some sense -- but I had also redirected my brain to another task. My mind was still being put to use, but for something completely unrelated to my to-do list.

If you're feeling stuck, use your brain for something else. Maybe there's a colleague who you've been meaning to get back to on an unrelated project, or maybe you just need to do a quick online puzzle. Keeping your mind active while giving it a break from the dredge of your to-do list might leave you feeling re-energized and ready to hit the ground running, wherever you left off.

If you work in marketing, there's a chance that, at some point, your job requires you to write something. And we know -- that's not easy, even when you do it every day. And much of the time, it's getting the words down that's the hardest part, whether it's getting a composition started, or getting the sentences to sound right.

STOP. That second part, about getting it to sound right? Forget it.

For way too many of us, our perfectionism is a pitfall to productivity. We write, stop, delete, re-write, and repeat the process until 45 minutes have gone by and we've written one sentence.

"I'd even say to ignore the 'delete' key on your first draft," HubSpot Sales Blog Editor Aja Frost once advised.

You heard it here: Deleting is not your friend. Just form a sentence -- any sentence relevant to your topic -- and keep going.

Remember what I said about bribing yourself? Well, sometimes, you might have to invent said bribe to get yourself motivated.

Here's another tale of writing something that I had been putting off. (I'm not a slacker -- I swear.) At about 4:00 PM one afternoon, I thought to myself, "I really, really need to get this done before I leave." So, I texted a friend and asked if she wanted to meet for happy hour at 6:00.

The thing is, it was a self-imposed deadline -- one that was established by plans to do something fun. If I had just set a timer for two hours, for example, it may not have been as effective. But because cutoff time was motivated by something recreational, I really wanted to get my task done.

A word of caution, however: Do not -- I repeat, do not rush through your work and turn in something with poor quality just for the sake of getting it done. Once your task is complete, let it marinate overnight, then come back to it with a new perspective the next day.

6) Do the thing you dread the most -- even if it's the only thing you accomplish today.

We've all had that long list of tasks that contains one, glaring item that seems like moving a boulder up a hill. Except, you dread facing that boulder so much that it causes a bit of "productivity paralysis," and in the process of putting off that one item, you end up putting off everything else on the list, too.

What? Am I the only one who's wasted an entire morning looking at real estate listings instead of addressing what I needed to get done?

That's when you need to face the because it's still going to be there, no matter how many homes you fantasize about buying. And once that one, task is complete, the rest of the items on your list probably pale in comparison -- and you might be so energized by getting the biggest one done, that since you're already on a roll, you feel newly motivated to get everything else done.