What is Anaconda for Python & Why Should You Learn it?

Python is a versatile language that you can use on the back end, front end, or full stack of a  web application. While the standard Python library has a lot of functionality, there are many times when we need modules and libraries that are not part of the standard library. That's where Anaconda comes in. 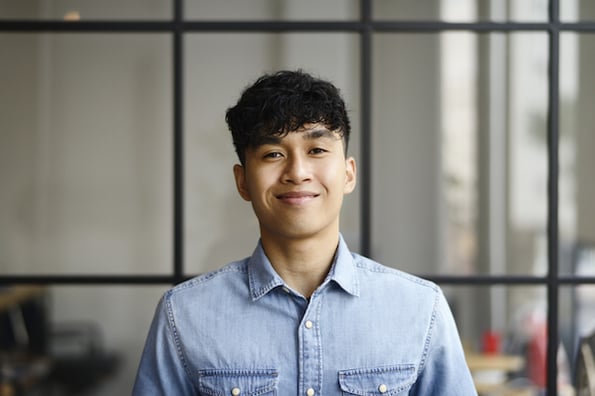 Anaconda Python is the perfect platform for beginners who want to learn Python. It's easy to install, and you can get started quickly with the included Jupyter Notebook. Plus, Anaconda Python has many features and libraries that you can use for your projects.

In this guide, we will explain Anaconda Python, show you how to install it, and how to use it to write your first programs. We will also cover some of the essential features of Python so that you can start using it immediately.

What is Anaconda for Python?

Anaconda Python is a free, open-source platform that allows you to write and execute code in the programming language Python. It is by continuum.io, a company that specializes in Python development. The Anaconda platform is the most popular way to learn and use Python for scientific computing, data science, and machine learning. It is used by over thirty million people worldwide and is available for Windows, macOS, and Linux.

People like using Anaconda Python because it simplifies package deployment and management. It also comes with a large number of libraries/packages that you can use for your projects. Since Anaconda Python is free and open-source, anyone can contribute to its development.

What is Anaconda for Python?

Anaconda software helps you create an environment for many different versions of Python and package versions. Anaconda is also used to install, remove, and upgrade packages in your project environments. Furthermore, you may use Anaconda to deploy any required project with a few mouse clicks. This is why it is perfect for beginners who want to learn Python.

Now that you know what Anaconda Python is, let's look at how to install it.

How to install Anaconda for Python? 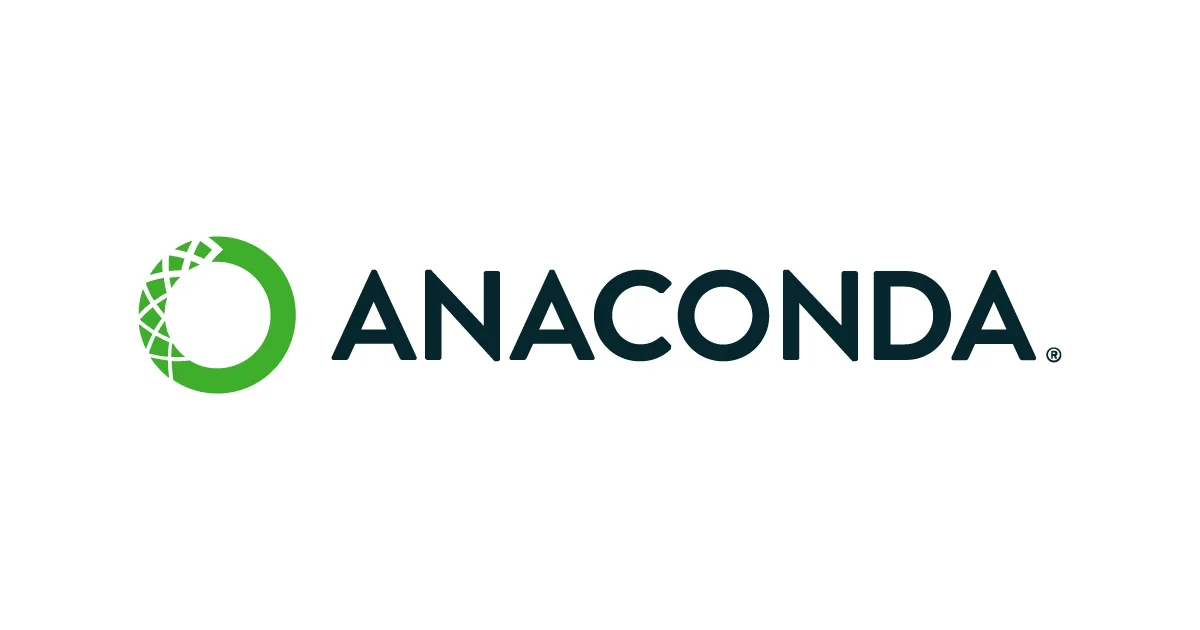 To install Anaconda, just head to the Anaconda Documentation website and follow the instructions to download the installer for your operating system. Once the installer successfully downloads, double-click on it to start the installation process.

Follow the prompts and agree to the terms and conditions. When you are asked if you want to "add Anaconda to my PATH environment variable," make sure that you select "yes." This will ensure that Anaconda is added to your system's PATH, which is a list of directories that your operating system uses to find the files it needs.

You also install Conda, Anaconda Navigator, and hundreds of other packages when you install Anaconda. This section will define some of these tools and why they are helpful. 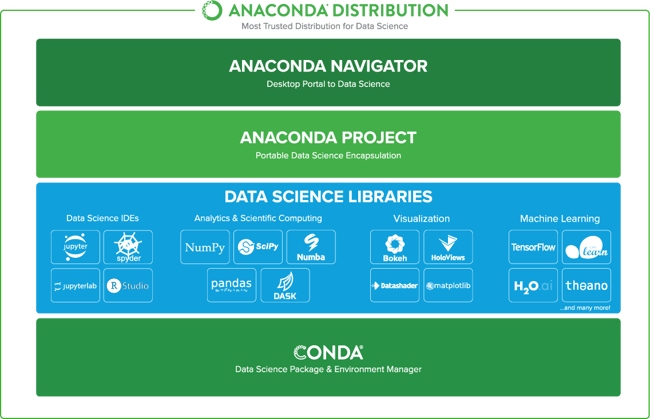 Conda is an Anaconda package and environment manager that helps you install, update, and remove packages from your command-line interface. You can use it to write your own packages and maintain different versions of them in separate environments.

Miniconda is a smaller version of Anaconda that includes the conda package manager and Python.

Anaconda Navigator is a desktop graphical user interface that allows you to launch applications and efficiently manage conda packages, environments, and channels without using command-line commands. 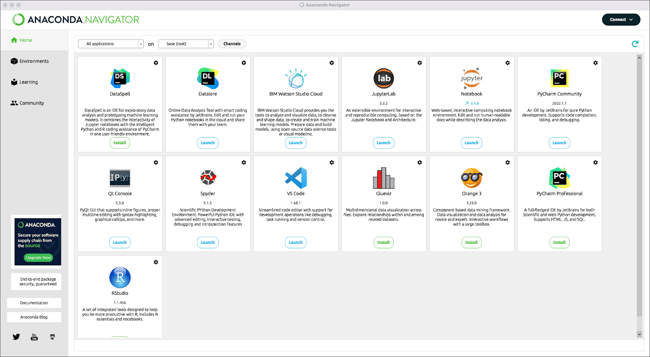 Spyder is a Python development environment with many features for working with Python code, such as a text editor, debugger, profiler, and interactive console.

Jupyter Notebook is a web-based application that allows you to create and share documents that contain live code, equations, visualizations, and narrative text.

A package is a collection of modules installed using Conda. A module is a Python file that has a .py extension.

An environment is a directory that contains all the files needed for a particular application, such as Python interpreter, packages, and configuration files. You can use Conda to create separate environments for different projects.

A channel is a repository of packages from which you can install any number of packages. The default channel for Anaconda Distribution is the Anaconda channel.

Now that Anaconda is installed and you are familiar with the tools, you can start writing your first Python program!

How to Use Anaconda for Python

This section will cover how you can begin coding using Anaconda.

Get started with Anaconda Navigator by launching an application. Then, create and run a simple Python program with Spyder or Jupyter Notebook.

Note: You may compare Conda with Navigator to see which one is appropriate for managing your packages and environments. You can even switch between them, so the work you do in one may be seen in the other.

How do you run Python code in the Spyder IDE?

Spyder is one of Python's most popular IDEs and is included in the Anaconda distribution.

To launch Spyder, open the Anaconda Navigator and select the Spyder IDE from the list of applications.

Once Spyder is open, you can write your first Python program in the text editor. For instance, you can input print("Hello World"). Once complete, click File > Save as and name your program. To run your program, click the Run icon or press F11 on your keyboard.

How do you run Python code in Jupyter Notebook?

Once Jupyter Notebook is open, you can create a new Python file by selecting New > Python from the top right corner. A new file will be created that you can rename by clicking on the file name. On the first line of the notebook, write some code such as print("Hello Anaconda").

To run your Python code in Jupyter Notebook, select the cell you want to run, then click on the Run icon or press Shift + Enter on your keyboard. Next, the output of your code will be displayed.

How do you run Python code with Anaconda Prompt or Terminal?

In addition to using Spyder or Jupyter Notebook, you can also use the Anaconda Prompt or Terminal to run Python code.

To launch Terminal on Mac, open the Applications folder and select Utilities > Terminal.

To launch Terminal on Windows, open the Start menu and search for cmd.

Once you have launched Anaconda Prompt or Terminal, you can type Python code directly into the window and press Enter to run it.

For more details on how to further get started with Anaconda, check out this video:

Wrapping up Anaconda for Python

Anaconda is a great platform for beginners who want to learn Python. It is simple to install and use and it comes with many features that can help you get started quickly.

Moving forward with Anaconda, you can continue to develop your skills by learning how to use other IDEs such as PyCharm or Rodeo, or you can explore other data science tools such as R or Julia. You may also want to learn how to use Anaconda to manage your packages and environments, or how to use Conda to create custom environments. Whatever you choose to do, Anaconda will be a great platform to help you get started.