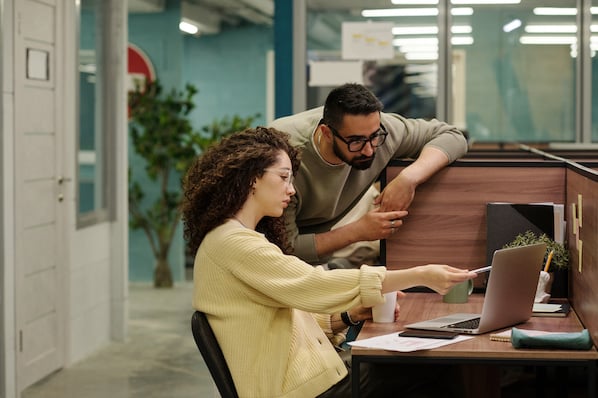 When starting to learn about HTML, one of the first things you’ll realize is that a web page isn’t just one entity — It’s actually made up of dozens or even hundreds of building blocks, all coming together to bring you the experience of a website.

In this blog post, we’ll introduce you to elements in HTML and teach you how to write them correctly. We’ll also provide a list of some of the most common HTML elements that you’ll use in your web pages. Let’s get started.

What are HTML elements?

In HTML, an element is a section of an HTML document. Some HTML elements represent visible components on a web page, such as text, images, or buttons, while others denote different sections of the page or provide meta-information about the document.

In the code itself, HTML elements are created with tags. An HTML tag consists of text between angle brackets (<>). For example, an HTML paragraph (p) element looks like this: 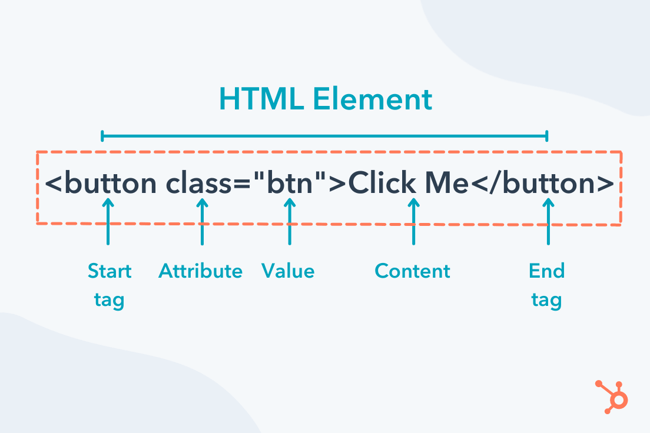 Note that HTML tags are not case-sensitive. You could write <p> as <P> and it would still work. However, most developers write lowercase HTML tags because it’s easier and more consistent.

While most HTML elements are written with an opening and closing tag, some elements consist of a single tag and do not have closing tags or content. These are called empty elements.

As you can see, simply using <br> creates the line break, no closing tag necessary. Other common empty elements include <img> (image), <meta>, <link>, and <input>.

HTML elements can also contain attributes. Attributes are extra code placed inside the opening tag of an element that provides additional information about the element. An attribute may be optional or required.

For example, we can use the style attribute to change the color of our paragraph element.

See the Pen HTML elements: <p> with styling by HubSpot (@hubspot) on CodePen.

HTML elements can also be placed inside of other elements — this is called nesting and is key to how HTML documents are assembled.

Going back to our <p> example, let’s see how an anchor element, which creates a hyperlink, is nested inside paragraph text. Here, the anchor element is placed between the opening and closing tags of the paragraph element.

See the Pen HTML elements: link inside a paragraph by HubSpot (@hubspot) on CodePen.

Also, notice that all text between <a> and </a> has styling automatically applied to make it appear as a hyperlink.

In this example, we call the paragraph element the “parent” element, and the anchor element is called the “child” element. Child elements can also contain nested elements and thus be parent elements themselves. You can nest elements as many levels deep as you need to in HTML, as long as each parent element is properly ended with a closing tag.

In fact, all HTML documents have at least two levels of nesting because of how they’re set up. An HTML document usually has the following structure:

Let’s unpack what we’re seeing here:. In every HTML file, all elements are nested inside the <html> tag. This is called the root element because it contains all other elements in the document.

You can place HTML elements inside <head> or <body>, and these elements may have child elements of their own. Finally, notice that each element in the example above closes itself before its parent tag closes. This means the tags are properly nested and is necessary to ensure the page is rendered correctly in the browser.

To learn more about why nesting is important in HTML, check out our intro guide to the Document Object Model in HTML.

When learning about HTML elements, it’s also important to distinguish between block-level and inline-level elements. Most HTML elements fall into one of these two categories.

Here’s an example of three block-level elements on a page, with colored backgrounds to show how they fill up space.

Even though the content does not span the entire width of the viewport, the block-level elements do. Also notice that, unlike the width, the height of each element is set by its content.

Here’s another example of block-level elements with some inline elements added in, so you can see how the two kinds of elements work together.

Even though there are well over 100 elements in HTML5, you really only need to know a dozen or two to write HTML effectively. It also helps that most tag names describe what the element does, making them easier to memorize.

If you think about it, it’s really interesting that every website and web page you’ve ever visited is made up of a handful of page elements, along with some creative use of CSS and JavaScript.

But that’s the gist of it — to build an effective page, it’s about making the most of the elements at your disposal. And the best way to learn elements is, of course, to use them. So, try building your own web pages, experiment with different elements, and see how it all comes together.

What is XHTML & How Does it Differ From HTML?