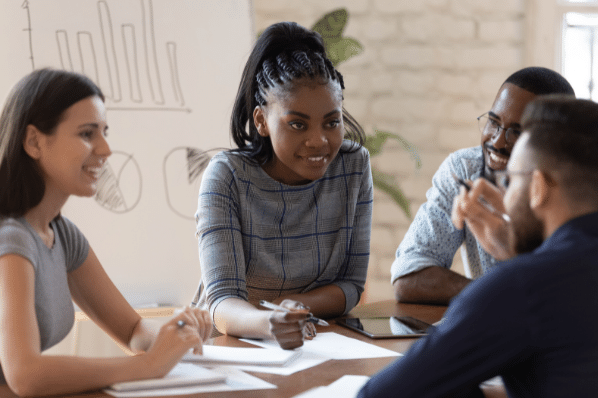 As technology evolves, we can spend so much time focusing on the "how" that we forget the "why." While it's important to understand how to implement different languages and technologies, understanding the concepts and principles behind these approaches can lead to wiser decisions.

For example, I want to write a simple JavaScript program that prints the numbers one through seven to the console. I could write seven different console.log statements with each different number, which would achieve my goal.

However, a key principle of programming is Don't Repeat Yourself (DRY), which means your code should be as lean and reusable as possible. I can save myself time by creating a loop and giving it the appropriate arguments, as seen below:

Not only does this save me from having to write (or copy and paste) seven different log statements, it's also more scalable. If I decide later that I want numbers 1-100, all I need to do is update the outer limit in my statement instead of writing out 100 console.log statements. I can even make this loop part of a function and package it as a module to be used throughout my application.

When applied across the different apps we use daily, the principle of DRY translates into better performance and user experience. We find the information we need faster and experience less frustration.

Principles and Practices of DevOps

As we saw, both methods in the opening example would achieve the same outcome, but the second follows DRY practices. While this might not seem critical in simple programs, imagine a large application full of extraneous console.log statements. More code means larger files, and larger files mean more load time.

When it comes to DevOps, principles also serve as signposts for a DevOps team the same way DRY guides developers' decisions. Without these central practices to orient us, the various technical and operations aspects of DevOps could quickly overwhelm us. In other words, we lose the forest for the trees.

However, by using DevOps principles as a framework, we can evaluate decisions based on not only their operational value (e.g. faster turnaround times) but if they move the team closer to these practices (e.g. automation). These judgment calls and the principles behind them help form your team's best practices.

Aligning your DevOps approach with the seven DevOps principles we've outlined below will drive your team's success. 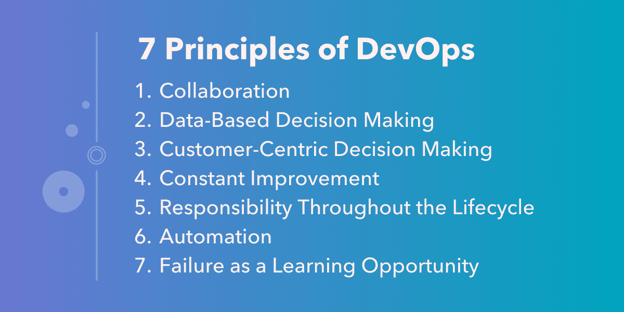 Collaboration also depends on good information-sharing practices. An issue discovered while the application is deployed should be adequately logged so the development team can account for this in future builds.

In the same vein, feedback should also be shared across the team. Positive feedback bolsters morale and reminds the team why its work is important. Negative feedback is even more important to continuously improving software deliveries.

Another central principle of DevOps is informing your decisions with data. Whether it's selecting the right tech stack or selecting tools to streamline your pipeline, you should always collect data around each decision to ensure your choice agrees with your team's metrics and historical data.

For example, a key performance indicator (KPI) for many teams is the time it takes to resolve an issue. The longer a defect exists, the more damage it can cause.

Knowing your average resolution time will help you make informed decisions when introducing new tools or procedures to your pipeline. You can compare their results against your benchmark average and get a good idea of whether or not the new addition will ultimately help or hurt your team.

The customer should be a central focus in a DevOps lifecycle. Equally as important as data, decisions should be weighed with the question, "Will this benefit the customer?" Collecting feedback from the customer on the existing product will guide future optimization.

DevOps teams also use live monitoring strategies to address problems before they become an issue for the customer. Other tools allow the team to measure how end users interact with the application in real time to see if they are encountering areas of friction. The speed of the DevOps lifecycle then allows the team to push out updates aimed at removing these pain points.

DevOps focuses on constant improvement, or the idea that the team should continuously focus on new features and upgrades. Another key idea follows the Agile methodology of incremental releases.

Previous software development strategies would focus on delivering the perfect product all at once. Though this sounds ideal, in execution it often meant that software deliveries would be delayed for long periods while issues were resolved. Instead, incremental releases allow the team to focus on achieving a minimum viable product (MVP) to meet the customer's core use case as soon as possible.

Once the MVP has been delivered, the team then shifts to producing features to add additional value to the product and works their way toward the ideal software. In the meantime, the customer can benefit from the tool sooner and learn the new features as they're released as opposed to having to learn the entire platform at the end of a waterfall delivery cycle.

5. Responsibility Throughout the Lifecycle

DevOps shows us a more logical approach: responsibility throughout the lifecycle. The whole team is responsible for the product from initial planning to its end of life. During this entire process, the development and operations teams are working hand in hand to update the software and address issues.

Those most familiar with the source code are the same developers now working to improve it and add new features. This places a new emphasis on producing quality code and proactively rooting out bugs, which leads to better outcomes for the customer.

A key benefit of the DevOps approach is speed: speed of software delivery, speed of updates, speed of patches. This momentum is achieved with automation. DevOps teams aim to automate every single phase of the process, from code reviews to handoffs to provisioning and deployment.

Not only does this allow the pipeline to move faster, but it also leads to higher job satisfaction among team members. They no longer have to perform manual and tedious tasks. Instead, they can focus on higher-order tasks like planning future improvements and researching new technologies to implement in the software.

The easiest route to automation is through purpose-built DevOps tools.

7. Failure as a Learning Opportunity

DevOps is a flexible approach to development. Processes are constantly being fine-tuned just as the software itself is continuously improving. Part of maintaining this flexibility is to view failure as an opportunity to learn and improve. Rather than trying to avoid failure at all costs, encourage risk-taking in the right context.

Risks come with the possibility of failure, but they also can lead to success. No matter how an experiment goes, you will better understand what does and doesn't work. This experience will help you plan future strategies and act as another data point for your decision-making.

Of course, early testing will enable you to fail fast where the failure isn't impacting the customer. This is the ideal time to encounter issues versus failing after deployment. This strategy is part of a concept known as "shifting left," which we'll examine next.

DevOps' emphasis on testing is a critical differentiator from other software development strategies. While other strategies focus on testing after coding and building the software, DevOps implements a "shift left" principle. If we imagine the development process as a straight line, shifting left means moving testing as far left toward the start of the process as possible.

Testing while still in the development side of the DevOps lifecycle offers notable benefits. First, it's easier, faster, and cheaper to uncover defects early in the process before more code has been written on top of it. More dependencies mean more complexity, and this increases the chance that fixing one part of the code will lead to something else breaking.

Another benefit of a shift left testing approach is that the emphasis for the development team is now on producing quality code from the start instead of waiting until a later stage to find defects. The product is delivered to the customer faster and with fewer (if any) bugs. Everyone gains from this approach.

These seven principles of DevOps are meant to serve as your north star as you fine-tune your pipeline. It's important to recall that DevOps is as much a culture as a development strategy, and collaboration is the bedrock of your culture and development practices.

The main takeaway is that you should practice a collaborative approach as you work to embrace these DevOps principles within your team. After all, your team is made up of individual stakeholders that all have their own perspectives, skills, and ideas to contribute. Beyond that, center your motivation on serving the customer and prioritize quality at every stage.

Machine Learning DevOps: How Does It Compare to DevOps?