What Is a Python Interpreter?

Python is one of the most versatile programming languages used by developers, data analysts, and other professionals. At the heart of this incredible language is the Python interpreter.

If you’re new to Python, you’ll need to know the vocabulary necessary to make your learning journey more manageable.

What is a python interpreter?

A python interpreter is a computer program that converts each high-level program statement into machine code. An interpreter translates the command that you write out into code that the computer can understand.

However, to better understand this definition, we must explain what high-level and low-level languages are.

However, while high-level languages are relatively easy to understand by humans, the same cannot be said for machines. Machines only understand machine code or machine language, a language represented by strings of bits — 1s and 0s.

As you can imagine, writing and reading a program as strings of 1s and 0s is extremely hard for human programmers. Imagine trying to memorize instructions as 1s and 0s!

So how do we bridge the gap between what a human programmer writes and what the machine understands and thus executes? By using an interpreter.

What is the difference between a python interpreter and a compiler?

Let’s now discuss the differences between a Python interpreter and a Python compiler.

Computer programs are generally written in a high-level language, also called source code. Since machines don’t understand this type of language, the language needs to be transformed into binary or machine code, which machines understand.

Compilers and interpreters make this transformation possible. However, while they both have the primary function of changing source code into machine code, there are differences between them.

These two remarkable tools significantly differ in how they translate the source code.

Interpreters translate source code one statement at a time. On the other hand, the compiler first scans the entire program and then translates the whole program into machine code.

Are compilers better than interpreters, then?

It depends on what you want. Programs with interpreters can run right away and be started faster. Furthermore, interpreters make debugging your code easier since they identify line-by-line errors.

Any changes made to the code written via a compiler will require it to be converted. Compilers no longer use computing power, making them more efficient.

How does an interpreter work in python?

The Python interpreter is CPython and is written in the C programming language. So how does CPython work? Let’s see.

First, the interpreter checks or analyzes the source code. By now, we assume you know what the source code means. It’s the high-level language you write programs in.

So, CPython receives the source code and initializes several commands to do some vital things.

It also checks for incorrect lines of code. If it encounters any error in a line, it stops the program from running and produces an error message.

This analysis divides the source code files into a list of tokens.

The interpreter then generates byte code.

After lexical analysis, which is the process described in the section above, the interpreter moves to the second stage, byte code generation.

After receiving the tokens, the interpreter generates the Abstract Syntax Tree or AST. This tree is converted to machine language (i.e., 1s and 0s). Because this is a Python interpreter, the code can be saved in a file with the .pyc extension.

Next, the interpreter initializes a PVM.

The interpreter initializes the Python Virtual Machine (PVM) in the next step. PVM is crucial because it’s what converts the byte code into binary code.

After conversion, the results are then printed. Python prints out the correct result if there are no high-level language errors. Otherwise, it prints out an error message.

Now that we have a high-level view of how the compiler works, let’s now show you how to set up and use a Python interpreter.

How to Install and Run a Python Interpreter

Start by going to the official Python website . Here, you’ll see different download options. Choose the right download for your operating system. As of the time of writing this article, the latest version of the Python interpreter software is 3.11.0. 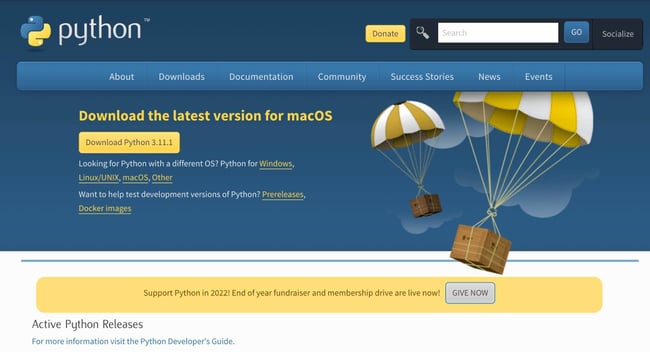 One of the great things about Python is that newer versions are backward compatible, which means you can write programs with older versions, but they’ll still run on newer future versions.

However, we highly recommend downloading the latest version because it contains the latest features and bug fixes.

After downloading and installing Python, you can then run the Python interpreter.

In our example, we have installed the installer on a Windows 11 computer. Here’s how to run the interpreter.

First, search for the Python program on your computer. Opening it should show you something similar to what we have in the image below.

Now enter a command or statement. The interpreter will provide the appropriate results.

We’ve decided to go for the tested and trusted “Hello World.” You can see the results below.

The basic Python interpreter allows you to execute single statements. However, if you want to execute multiple statements or build Python applications, you’ll need more.

This is where Integrated Development Environment (IDE) comes in. These applications give programmers extensive software capabilities like editing source code, building executables, and debugging.

Some of the best IDEs we recommend include:

Installing these applications is relatively easy. All you have to do is visit their websites, download, and install.

We hope you have a better understanding of what a Python interpreter is. First, it converts source code into machine code via tokenization.

These tokens are then used to create an AST (Abstract Syntax Tree). Finally, the AST is converted to byte code, and the PVM executes the byte code to give the final output.

Using an interpreter vital for programming and is one of the easiest steps to learning Python.