10 Social Media Risks MOST Companies Are Too Afraid to Take 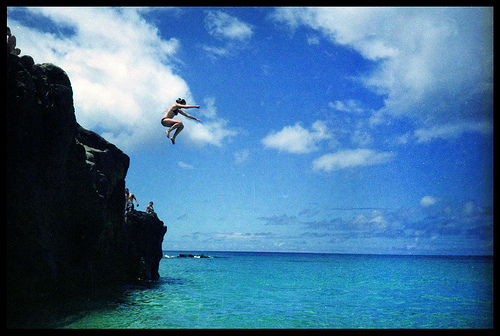 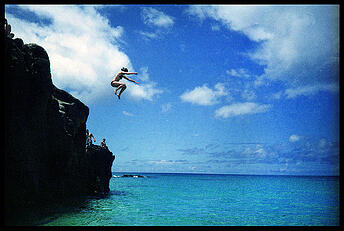 There was a time when just being in social media was a risk for companies. I'm glad we're (mostly) done with those days, but now we're into a new era ... the era of experimentation.

Oooh, I like this era! This is when people really start getting creative. And the more risks brands take, the more we learn what works and (unfortunately) what totally backfires.

What you'll find in this post are the social media ideas that many brands wouldn't touch with a ten foot pole; except, of course, for some special few who said, "Meh, screw it." And boy do we love those people! Take a look at some risky social media moves that flout convention, and the brands that are pulling it off, anyway.

1) Loosening Up Enough to Make a Joke in B2B Marketing

Businesspeople don't smile. They carry briefcases and march around with a withering stare of the utmost seriousness. Except the people at IMPACT Branding. Take a look at their latest Facebook timeline cover photo (which they update pretty frequently, check back often):

If you missed the honey badger meme, maybe you'll enjoy a little something from the How I Met Your Mother genre: 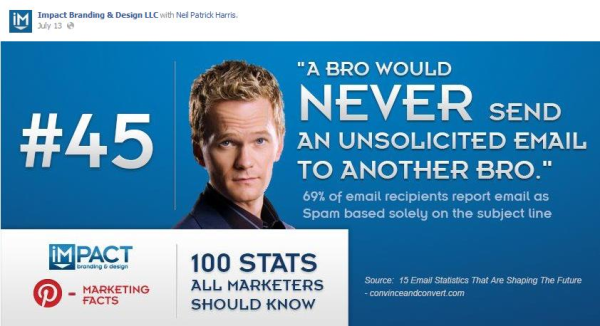 Or if The Office is more your speed, they've had a little fun with Dwight "Bears, Beets, Battlestar Gallactica" Schrute, too: 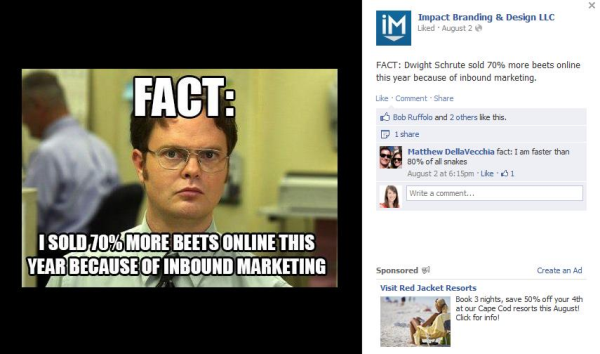 Point is, everyone likes to laugh. Loosen up! As long as your jokes aren't in poor taste -- you know this by creating buyer personas in which you get to know your audience's sense of humor -- your readers will appreciate that you've infused a little levity into their day. Fact.

"It's easy for them to be funny," you say, "they work in branding and design!" You don't have to work in a hip industry to be funny in social media. Take a look at General Electric's Pinterest account if you want proof that "boring" industries can take a risk on humor, too. Here's one of their latest pinboards: 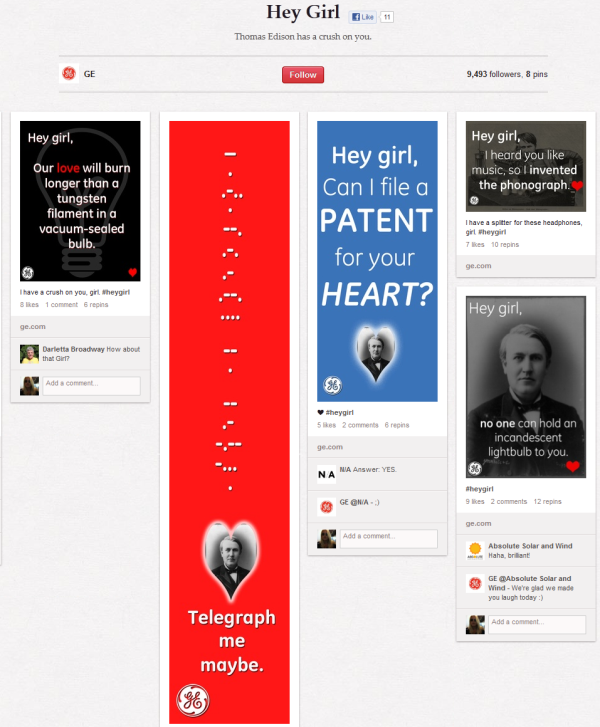 This isn't great just because it gets people chuckling ... it actually expands GE's audience by thinking about their industry in terms more people can understand. So no, maybe their engineers don't love this (or maybe they do, because it's hilarious), but they already have an audience of engineers. You're not going to grow your reach if you don't think outside the box!

Some brands are too scared to get into social media because it gives people a place to air their grievances. We get that. We don't agree with it, but after hearing the refrain so much, we "get" it. Then there are the brands that take it one step further, and actually proactively open the feedback floodgates. Take a look at how UncommonGoods does it on its Facebook page, for example:

If you clicked on that link in the update, by the way, it takes you to this page on their website: 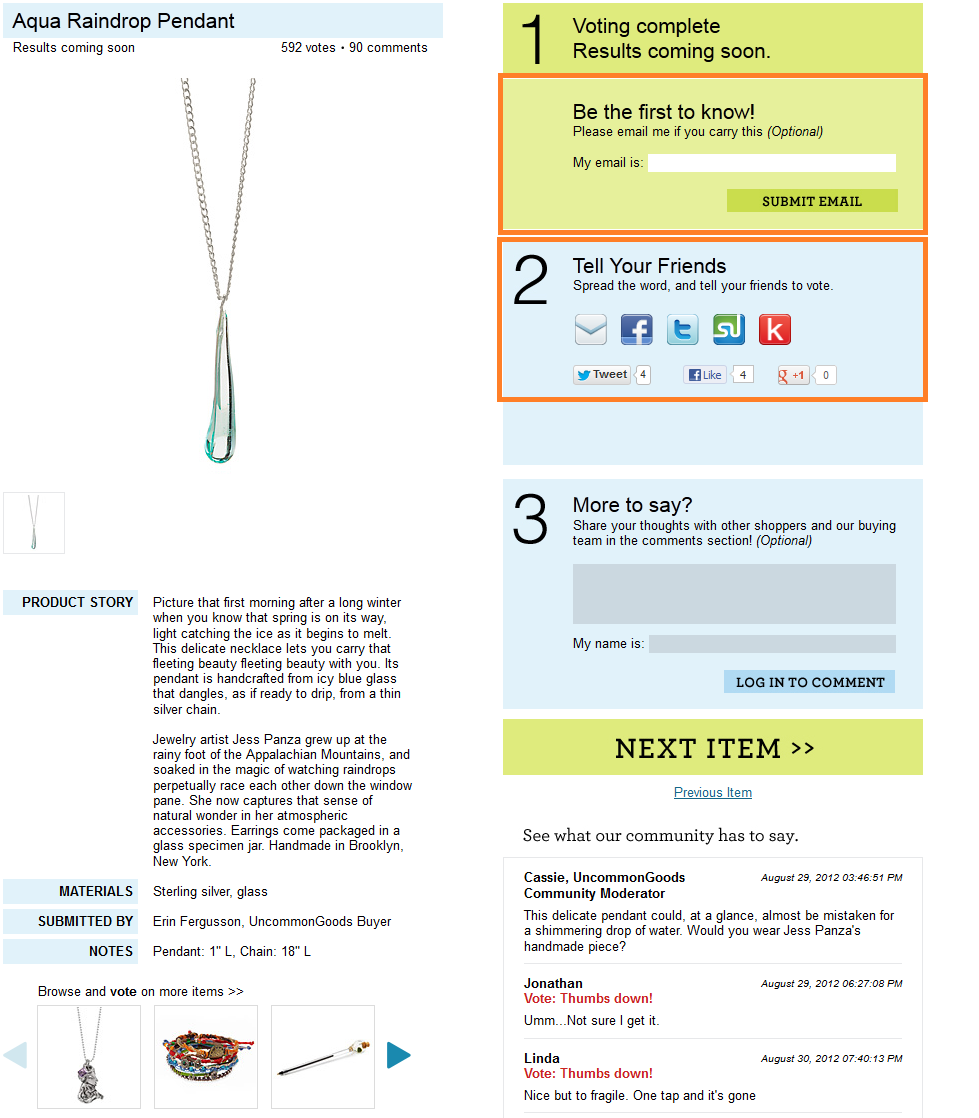 Uhh, this is $%&#!@$ genius. Yeah, some people don't like it (though for the record, I totally voted for it). But even if 99% of people despise it, who cares? Now they know. Now they can make educated inventory decisions. Now they can even turn those social media followers into leads (see the first box called out in orange above) by nurturing them with the email address they just input -- yes, email was required -- in order to vote! And they can even expand their database (see the second box called out in orange above) by asking voters to send this survey to a friend.

Bottom line: no risk, no reward. And really, it's not that much of a risk, anyway. The people who give feedback are often those with the strongest feelings -- both negative and positive. So while you may get heated responses from some unhappy people, you'll also get some overwhelmingly loving responses from your ardent fans.

One of our product marketing managers wrote a blog post recently that featured Eloqua's content as an example of exceptional B2B content. Joe Chernov at Eloqua not only tweeted it, but with some kind words, at that:

And that isn't the first time he's shared HubSpot's content. And it pays off for both brands, because this is how you look to those that are following the conversation:

Give credit where credit's due. Your prospects aren't stupid. They won't get distracted with one social media update from a competitor and then abandon you. They'll choose their solution based on the research they've conducted -- with the help of all your valuable content, regardless of source.

5) Letting Employees Get Social for Your Company

Lots of organizations cringe at the idea of loosening the social media reigns. I mean, if anyone could tweet as a HubSpotter, how would we keep a lid on or brand image?!

Ha, well, you probably know we don't actually feel that way. Most of our employees actually have @HubSpot in their Twitter bio ... probably because we actually encourage them to do it. That's because we know the more people we have sharing HubSpot content in social media, the more our reach will grow. We trust that our employees have good judgment and won't tweet something that will damage our brand. We also trust our audience to know that the opinions of employees don't necessarily reflect those of our organization -- so just because an employee with "@HubSpot" in his or her bio tweets something political, for example, doesn't mean it's how HubSpot feels. I mean, duh, you know?

Are there any other companies that do this? There sure are! Just go take a look at Best Buy's @Twelpforce for another stellar spin on the concept.

Best Buy's account is managed by over 3,000 Best Buy employees who can feel free to share content and be themselves without constantly worrying they're "doing something wrong."

Speaking of letting go of your control issues, social media is rife with opportunities for user-generated content. But some brands are scared of what content that freedom will yield. And then there are the ones that remember more than 8 in 10 millennials think user-generated content indicates brand quality, and influences their purchases. So those companies loosen their vise grip a little bit.

Pinterest is a fantastic opportunity for this, and some brands are experimenting with it. To let other pinners upload content to your Pinterest boards, you have to actually give them permission. The way ModCloth has approached it is the most common way we've seen it done, asking pinners to email them so they can grant pinning permissions. Just look at what happened: 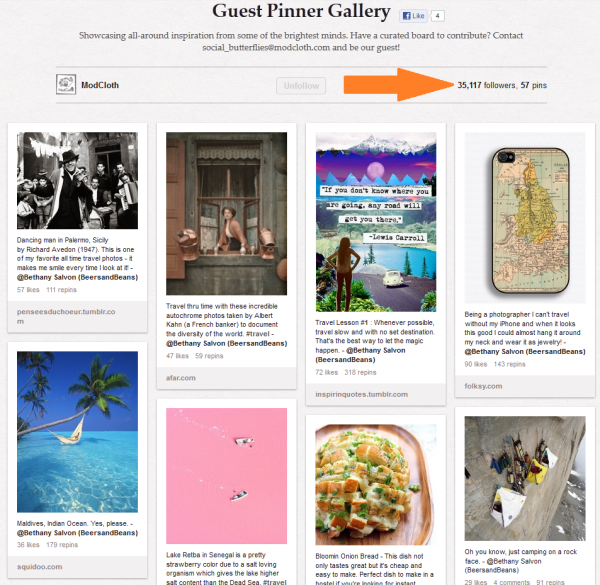 Nothing bad! Who would've thunk it? Not only does this board have a ton of followers ... can you imagine a better way to get insight into the interests of your target audience? This user-generated social media content is a persona-development gold mine!

7) Giving Away Your Secret Sauce

We can't tell people how we do what we do! They'll just do it themselves and we'll go out of business! Lock the doors! Turn off the lights! Burn the documentation!

Alternately, you could remember that sites like Pinterest -- that's right, we're not done with our Pinterest love affair yet -- are perfect for how-to and DIY content. In fact, the pins that consistently gets repinned the most frequently on Pinterest include the word "DIY," according to research conducted by HubSpot social media scientist Dan Zarrella. That shouldn't come as too big of a shock, either, considering "how-to" content typically performs well in every other inbound marketing channel.

That's why we love that Molly Maid isn't shying away from teaching people how to maintain a clean home; they know their target customer is interested in these tips and tricks they can do along the way, but still want the bulk of the work to be left to a professional. This pinboard establishes themselves as an authority in their field, without sacrificing clientele. 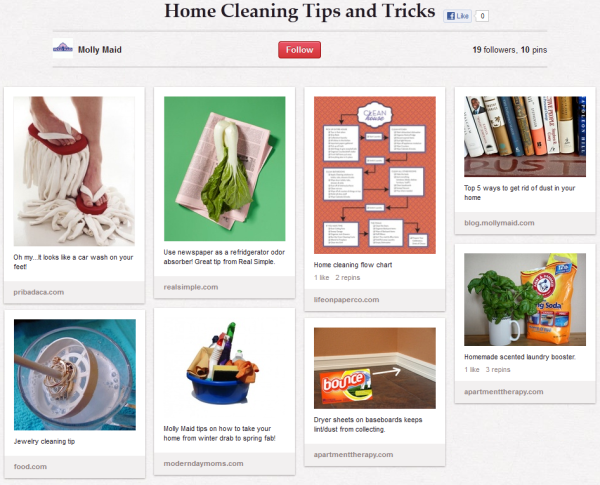 8) Taking a Stance on a Controversial Issue

I feel like I'm going to start controversy just by posting this example. But, here's an example of a brand that knew they'd anger some people with their Facebook post ... but went out on a limb and did it anyway: 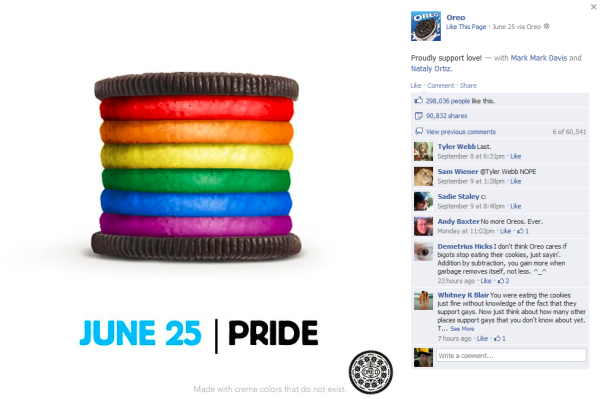 There were, of course, tons of people who said they'd never eat an Oreo again. I don't think it will have a big impact on their bottom line. Nabisco's probably doing just fine. A move like this is certainly a measured PR decision, and one thing's for sure -- they had a lot of detractors come out. But there was also a huge, enormous movement of supporters who came out to congratulate Oreo. And a lot of those supporters were new to Oreo's Facebook Page. That's one way to generate reach ... or just stand up for something your company believes in.

Okay, so this is one of those risks that's a risk because a lot of people think it's a faux pas. I mean, why should you post content that's unrelated to your brand, product, service, or industry? That's what your audience is there to see!

True ... ish. But honestly? Because it was a sign of a social media screw up for a while, people stopped doing it. And then social media profiles turned into these stale, lifeless things that were full of content everyone expected. That's screwing up, too! So what's a marketer to do?

That's a really cool update to read! Don't you feel like you know the business owner a little better now? And do you notice how she weaved in a fun, controversial topic to get conversation going? Here's another instance ...

It's so easy for brands to become faceless because they're concerned about getting transactions, leads, comments, engagement, blah blah blah. Look, that's all important, but so is just making people feel good. And if you think this whole "having a personality" approach only works for a small business, think again. Here's one more example from luxury car service Uber: 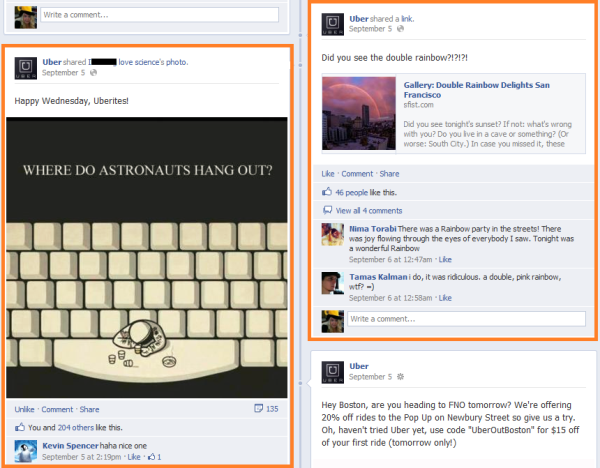 I think there's a few reasons fathers teach their sons to never give their wives cleaning supplies as a gift; and one of them (just one of them, I know there's a thousand more) is probably that they're not really that pretty. People need vaccuum cleaners, they don't sit around ooh-ing and aah-ing about how cute they are. So why would you create a Pinterest account for them?

Well, if you're Oreck, you do it because you thought of ways to make your product visual. Take a look at three of their pinboards that focus on aesthetically pleasing things ... and note the vacuum cleaner tie-in in the board descriptions! This one even has a fun little rhyme going with "Blue, it's our longtime obsession. Blue, it's not even a question." 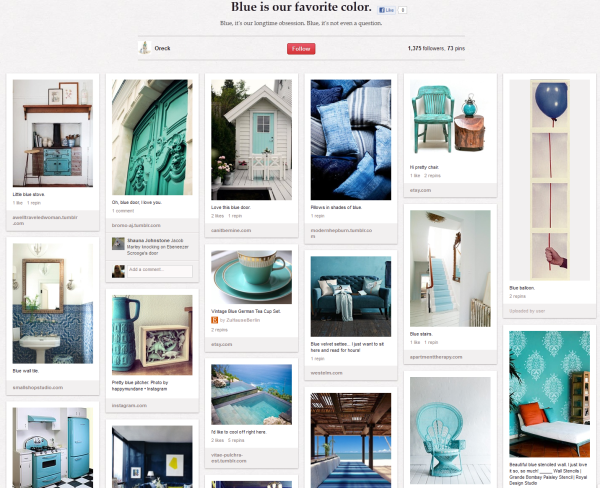 When else do people need to clean up? When it's party time, baby! This board gives "A little inspiration to make your shindig prettier ... then a little help with the post-party clean-up." 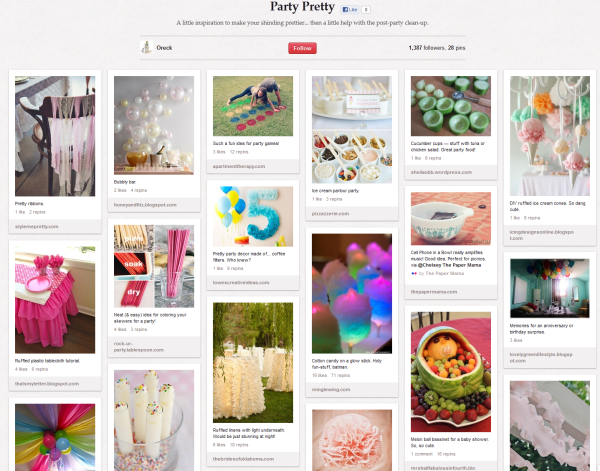 Finally, check out the "Stunning Floors" board, where you can see why "The prettiest of floors need the best of care." 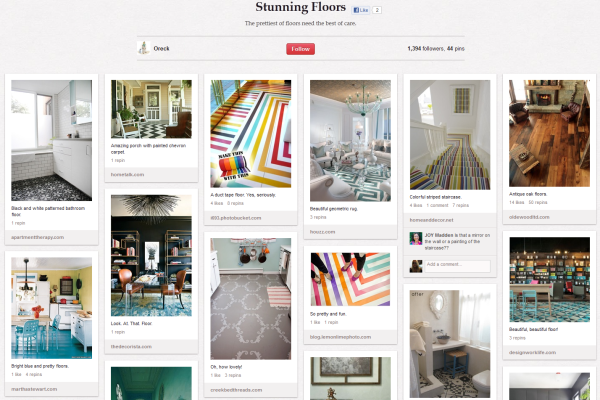 So if you think pinners are going to throw your brand out on its toosh if you show up on Pinterest, think again. They'll only rail against you if you can't think of how your brand ties into something visually exciting -- and if you think really hard, I bet you can figure it out ;-)

Are there any things you've wanted to try in social media, but have been too scared to actually do? Share your hopes and dreams in the comments ... you may just find the support you need to take the plunge!