The WordPress Performance Team: What We Know from WCEU 2022

In October 2021, Google and Yoast WordPress contributors published a proposal to create a Performance team to focus on increasing the performance (speed) of WordPress Core. 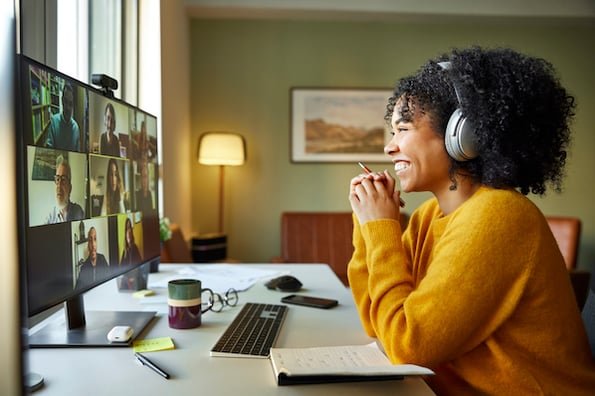 Thanks to its warm reception, this proposal was approved and the team had their first kickoff meeting on November 2, 2021. Since then, the team has already released a plugin with performance-related features that are intended to be merged into WordPress Core eventually.

To fully understand this new team and investment in performance, we attended Felix Arntz’s session “Enhancing performance in an open-source CMS ecosystem” at WordCamp Europe 2022. We will include insights from this sessions throughout the post, which will cover:

What is the WordPress performance team?

The team meets every two weeks to identify priority projects and high-level timelines, assign responsibilities for the projects identified, and define ongoing or future measurement and success criteria. It also has a dedicated performance channel on slack as well as a performance tag on Make websites.

Why was the WordPress performance team created?

The WordPress performance team was created to meet the increasing needs and expectations of site owners and end-users regarding website performance (speed). To do so, WordPress needed a team that would unify, coordinate, and monitor efforts to improve performance in WordPress Core.

Actively investing in core performance has never been more important for WordPress. In the proposal for the creation of a performance team, the authors noted a widening gap between the performance of WordPress and proprietary platforms like Duda, Wix, Shopify, and Squarespace.

In The HTTP Archive’s Core Web Vitals report, for example, the percentage of WordPress and WooCommerce sites achieving “good” Core Web Vitals scores on mobile and desktop clients is only marginally increasing over time, whereas sites on other platforms are significantly increasing.

Since March 2020, WordPress sites have improved from 13.26% to 27.04% sites achieving good Core Web Vitals scores. While that’s more than double the amount in two years, the overall percentage of sites is still relatively low. This is especially true when compared to sites on Duda, which significantly increased from 16.7% sites having good CWV scores in 2020 to 63.83% in 2022. That’s a 282% improvement. Wix increased even more dramatically, with a 970% increase in sites achieving good CWV scores since 2020. 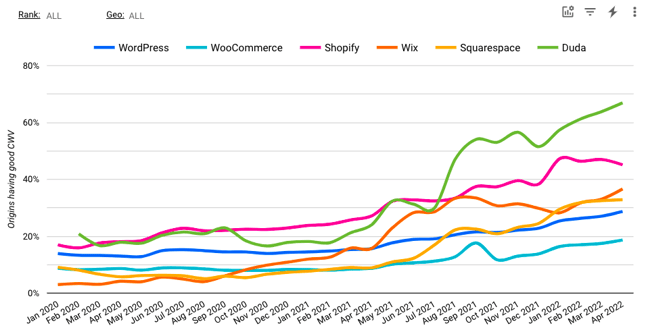 The fact that the performance gap between WordPress and other platforms continues to widen despite the availability of performance plugins and performance-optimized themes suggests that there’s issues in discovery, education, and active investments. And since the plugin and theme ecosystem weren’t solving these problems, the team was created to do so.

This is not just a problem that WordPress is facing. Looking at all open-source CMSes including WordPress, Joomla, Drupal, Prestashop, TYPO3, and Magento, 36.2% sites are achieving good CWV scores. This is a 69% increase from 2020. Compare this to 44.1% of sites achieving good CWV scores on proprietary CMSes including Wix, Squarespace, Shopify, and Duda, which is a 300% increase from 2020. 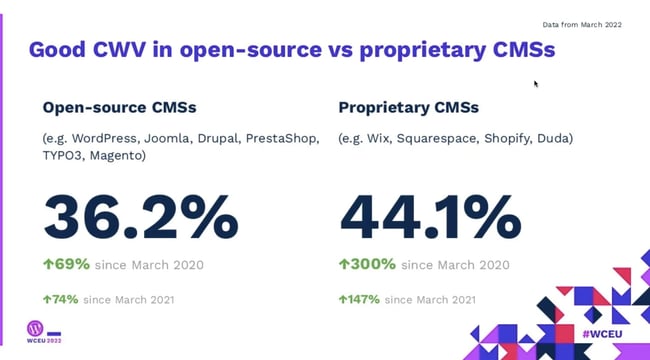 This is even more alarming when you consider CMS growth rates, according to Arntz. While WordPress is still the most popular CMS by far, proprietary CMSes are growing faster. Since March 2020, sites using Duda increased by 467%, sites using Shopify by 130%, Wix by 111%, and Squarespace by 101%. Sites using WordPress increased by 76%

Now that we have a better picture of how WordPress is lagging behind proprietary CMSes in terms of performance, let’s take a closer look at some factors that might be driving this performance gap below.

Why are proprietary CMSes doing better than WordPress in terms of performance?

In his WCEU 2022 session “Enhancing performance in an open-source CMS ecosystem,” Felix Arntz said there are three major reasons that proprietary CMSes are outperforming WordPress. Let’s take a closer look at them.

1. They have a controlled stack.

“Proprietary CMSes tend to have their own infrastructure that their entire platform is running on, which makes it easier to optimize the stack for the needs of the platform (and vice versa). Open source CMSes, on the other hand, are distributed,” Arntz said.

WordPress, for example, has to cater to any possible hosting environment. This makes it particularly challenging to land performance enhancements, or any type of enhancements.

2. They have much more limited ecosystems, 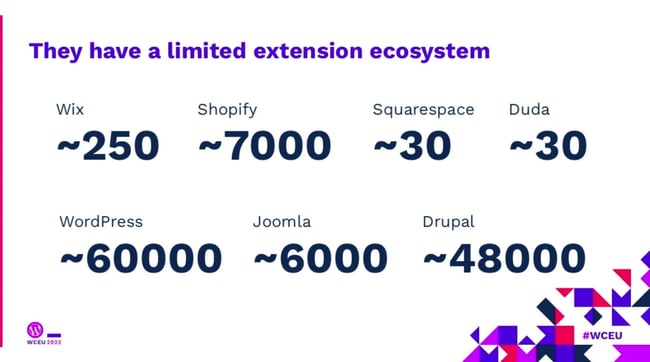 This is for two major reasons, according to Arntz. First, proprietary CMSes have fewer extensions because they have such an extensive process to approve. This makes it nearly infeasible for individual contributors to create an extension that gets included in their ecosystems. Second, their codebases are closed so it’s even harder to make an extension.

3. They are operated by a single entity.

Proprietary platforms are usually owned, maintained, and controlled by a single company with a degree of hierarchy. As a result, there don’t need to be as many conversations around landing performance enhancements, or other changes. Rather than needing to advocate for feature projects or features for months or getting buy-in from every single person, they just need to do what the higher-ups say, according to Arntz.

“Open source platforms, on the other hand, have a diverse community of individuals and companies that collaborate on the project. Every new feature and enhancement has to be discussed, reviewed, and get buy-in at equal level,” he said. 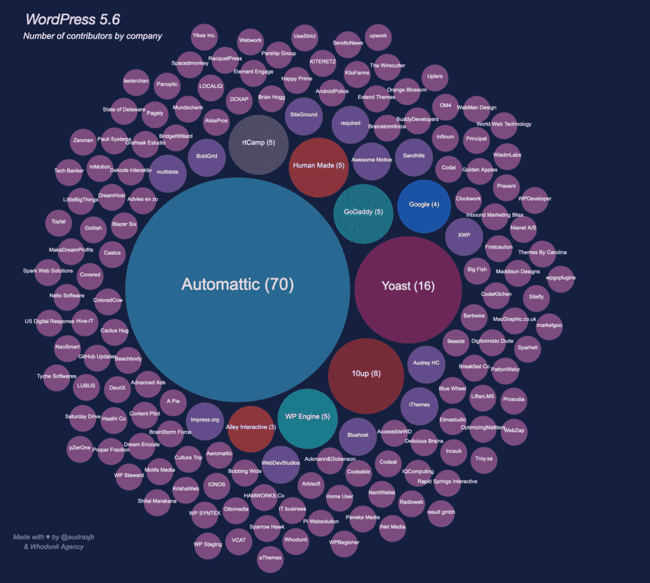 “Another benefit of being owned by a single company is that it’s not controversial to include features in the CMS from a centralized infrastructure like a CDN, for example,” Arntz said. WordPress users, however, would have to learn what a CMS is, set one up, and pay for it separately.

4. They have been focused on enhancing performance.

While the above characteristics help proprietary CMSes optimize for performance, they’ve also been investing in these optimization efforts for a while — and WordPress hasn’t.

It’s particularly important to change this trend because the challenge of improving performance is greater for an open-source CMS with a massive third-party ecosystem with thousands of plugins and themes than proprietary CMS systems hosted in a controlled environment and maintained by a single company.

Arntz stressed that it’s good that open source CMSes like WordPress come with the greatest amount of freedom so users can choose their own adventure, pay different ranges, extend the platform by any filter or action, and so on. “But this freedom plus ecosystem comes at cost. When landing a performance enhancement, we have to make sure it works everywhere or at least doesn’t break anything,” Arntz said. That’s why the WordPress project is now prioritizing performance and UX with the creation of the performance team initiative.

Despite the many challenges it faces, the team has already set out an impressive agenda and landed some impressive enhancements.

While there are many areas in need of performance enhancements in WordPress, the performance team defined the most impactful areas of focus in order to keep the scope limited initially. Using data from an audit of the 100 most popular sites in various CMSes, including WordPress, the team was able to identify the most common and impactful problems specifically affecting WordPress performance. JavaScript and images are the two areas that “make for the biggest performance flaws” and therefore “would allow for the biggest wins,” Arntz said.

Let’s take a look at these and other focus areas below:

While we can expect advancements, new features, updates, and more in these areas, the focus is achieving the most “impactful” wins on the WordPress core first. Let’s take a look at some of these wins below.

To advance its mission of improving the performance of the WordPress project and ecosystem as a whole, the team is making three parallel efforts:

Since its kick off meeting in November, the WordPress performance team has already made strides in these areas. Let’s take a closer look at its primary project to date, the Performance Lab plugin, as well as other efforts.

Each feature or module is an individual feature project for WordPress Core, and can be activated or deactivated in the plugin settings page. But the plugin provides a centralized location so that developers can collaborate and maintain the plugin easier and end users don’t have to keep track of multiple plugins.

The first version of the beta-testing plugin was released in March 2022. It came with the following modules:

WordPress 6.0 — also known as Arturo — was released on May 24, 2022. It contained nearly 1,000 performance, stability, and usability enhancements and bug fixes, all aimed at improving the writing and designing experiences.

The WordPress performance team also worked on improving the WordPress Caching API for the 6.0 release. Thanks to the team’s contributions, users can now:

“The goal of the performance team is not to catch up or surpass the performance of proprietary CMSes. It’s to improve performance of the platform at scale for everyone, not just for agencies or developers that manage them,” Arntz said in his closing remarks of his WCEU 2022 session.

He predicts that if we can achieve the average of the increases of the CWV passing rate in 2021 and 2022, then approximately 75% of sites on WordPress could achieve good CWV scores by 2024. That’d be millions of sites delivering better performances and better user experiences.