Inspiring Quotes From Leo Burnett on Advertising and Creativity

The man is synonymous with Chicago, leading the formation of the city's own style of advertising.

When budgets were being cut and the country was deep in the throes of the Depression, Leo Burnett decided to mortgage his home and borrow against his life insurance to open the doors of an advertising agency in downtown Chicago. On the first day, he set out a bowl of red apples, a tradition that continues.

The former small town reporter is known for creating the most iconic mascots and taglines in advertising. He introduced the Jolly Green Giant, the Marlboro man, Tucan Sam, Morris the Cat, the Keebler elves, and Tony the Tiger -- the later has been the face of Kellogg's Frosted Flakes for more than 60 years. He added to our vocabulary "Beef, it's what's for dinner," "They're gr-r-reat!", and "Fly the friendly skies."

And he was a prolific writer and speaker on the advertising industry. He said:

Advertising is not the noblest creation of man’s mind, as so many of its advocates would like the public to think. It does not, single-handedly, sustain the whole structure of capitalism and democracy and the Free World. It is just as nonsensical to suggest that we are superhuman as to accept the indictment that we are subhuman. We are merely human, trying to do a necessary human job with dignity, with decency and with competence. 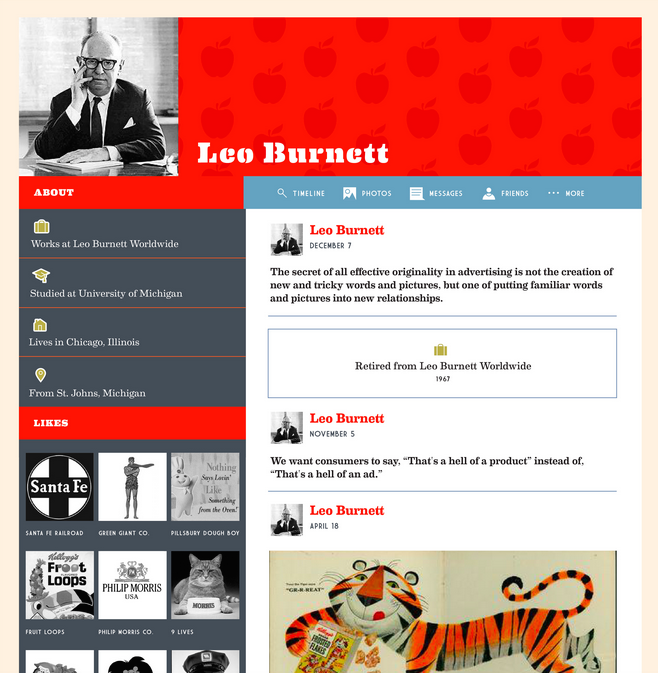 If you want to read more from this titan of the industry, check out these 23 quotes from Chicago's original ad man. Or read more about the life and work of Leo Burnett, David Ogilvy, and other advertising legends in the Social Network of Advertising Icons.

Leo Burnett on Advertising and Creativity

"To swear off making mistakes is very easy. All you have to do is swear off having ideas."

"Let's gear our advertising to sell our goods, but let's recognize also that advertising has a broad social responsibility."

"A company in which anyone is afraid to speak up, to differ, to be daring and original, is closing the coffin door on itself."

"I am one who believes that one of the greatest dangers of advertising is not that of misleading people, but that of boring them to death."

"When you reach for the stars, you might not quite get one, but you won't come up with a handful of mud either."

"Curiosity about life in all of its aspects, I think, is still the secret of great creative people."

"Steep yourself in your subject, work like hell, and love, honor and obey your hunches."

"Let's continue to be known as an agency which spends more time trying to improve its theories rather than defend them."

"I have learned that it is far easier to write a speech about good advertising than it is to write a good ad."

"Good advertising is a happy wedding of words and pictures, not a contest between them."

"Make it simple. Make it memorable. Make it inviting to look at. Make it fun to read."

"The work of an advertising agency is warmly and immediately human. It deals with human needs, wants, dreams and hopes. Its 'product' cannot be turned out on an assembly line."

"Anyone who thinks that people can be fooled or pushed around has an inaccurate and pretty low estimate of people - and he won't do very well in advertising."