Revenue Edition: How to Choose the Right HubSpot Sales Reports 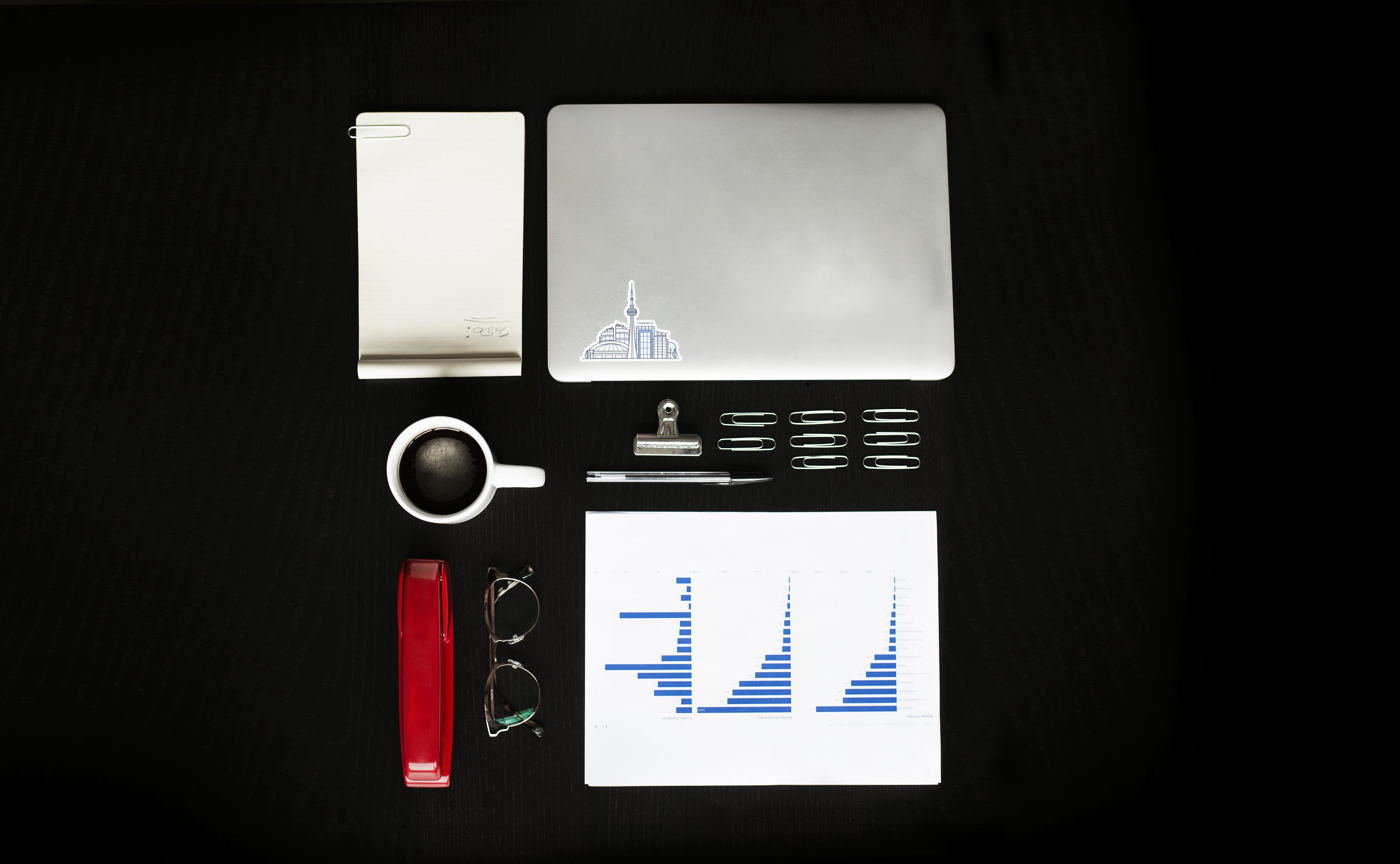 Your team is up and running in HubSpot. You’ve mastered your deal pipeline, and you've used the HubSpot Academy Sales Software Certification course to train your whole sales team to use HubSpot CRM. You’re finally starting to feel like the HubSpot software is working for you, not the other way around. Deals are closing, and things are good!

Now what? How do you keep an eye on your pipeline and start planning revenue growth down the road?

By using a few of your free HubSpot reports, you can gather a lot of information about what’s going on in your sales pipeline and draw conclusions about how to improve it in the future.

You have access to hundreds of reports in the HubSpot CRM, but these are my favorite HubSpot reports for measuring deal progress and revenue.

As long as you've installed the HubSpot tracking code, this report will show deal close amounts over time, with a breakdown by source to highlight which sources are leading to closed deals. 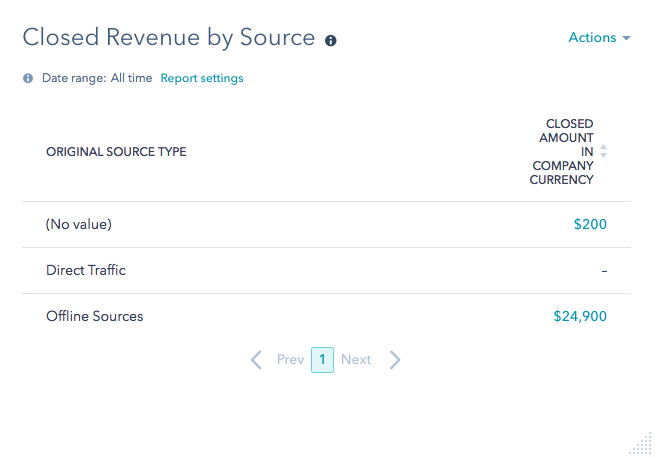 As a standard report on your sales dashboard, this forecast shows the amount of revenue for deals in each stage of your deal pipeline. The forecasted revenue is calculated by multiplying the deal amount by the deal stage probability.

This report shows revenue from closed deals compared to your team's quota or a custom goal. You can use this report to track your team’s progress over time and to help set better sales goals. 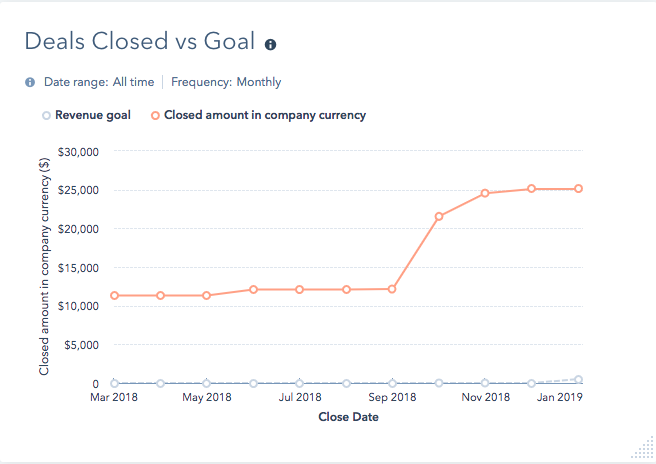 You can use this funnel report to measure how your deals are converting through each individual deal stage. This funnel can help you find weak points in your current sales process or help you find deal stages that often get skipped over. 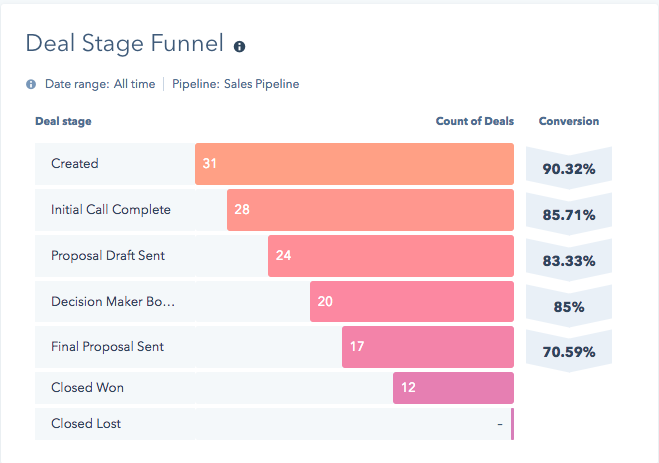 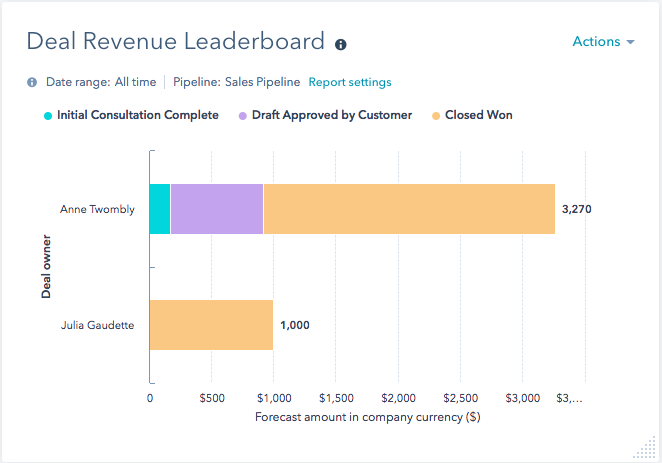 This report shows the average amount of time deals spend in each stage of your funnel. You can use this report to see how deals are moving through your pipeline and to see where they might be getting stuck. 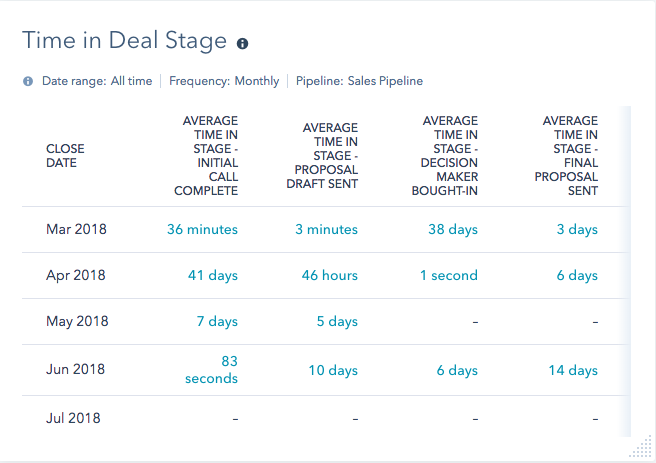 Want to know the best part about these reports? When they're placed close together on your reports dashboard, you can begin to draw insights by comparing the data from one report to another.

For example, if you place the Deal Stage Funnel next to your Time in Deal Stage report, you might notice that one of your Deal stages has a lengthy turnaround time but a very high percentage of deals that successfully progress to the next deal stage. This might mean that there's a pattern of prospect discomfort during this deal stage. More importantly, it may help you find a way for your sales team to be more heavily involved here to help those prospects become more comfortable in this same deal stage before moving forward.

Now that you're a master of your sales dashboard, go forth and prosper!

How to Navigate Integrations Reporting: GoToWebinar

How to Clean Up Your HubSpot CRM Data