The Evolution of Language: How Internet Slang Changes the Way We Speak 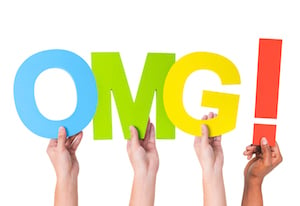 Every year, hundreds of new words and phrases that come from internet slang are added to the dictionary.

Some of them are abbreviations, like FOMO (Fear Of Missing Out) and YOLO (You Only Live Once). Others are words that have been stretched into more parts of speech than originally intended -- like when "trend" became a verb ("It's trending worldwide"). Others still have emerged as we adapt our language to new technologies; think "crowdfunding," "selfie," "cyberbullying."

You might notice how many of these "new" words are actually just appropriated, meaning they are pre-existing words that are combined or given entirely new meanings. For example, "social network" became a word in the Oxford English Dictionary back in 1973, referring to the physical activity of networking in a social atmosphere. In the 1990s, people began using the term to refer to virtual engagement, and that became an official definition in 1998.

Why are so many new words and phrases emerging the internet, and so quickly? How does slang spread between cities and countries? Finally, what does it take for a slang word to become a word in the dictionary? Let's explore some of the answers to these questions.

Is the Internet to Blame?

The internet isn't the only technological phenomenon that's changed the way we talk. Radio, television, and telephones have introduced their fair share of new words and phrases into our lexicon over the last century.

For example, the phrase TTFN (Ta Ta For Now) comes from the "It's That Man Again" radio series in the 1940s. Similarly, the word "doh" that was made famous by Homer Simpson on The Simpsons became an official word in the Oxford English Dictionary, "used to comment on a foolish or stupid action, especially one's own." And don't forget "Give me the 4-1-1," the slang phrase for requesting information that refers the number for local directory assistance.

But as we spend more time online, we spend less time listening to the radio and watching TV -- and smartphones have blurred the line between phone and internet. At this point, the internet is likely the most prevalent influence on our day-to-day dialogue.

Think about how quickly internet trends come and go. The fast pace of change on the internet means we are adopting more words faster than ever before. "Language itself changes slowly, but the internet has sped up the process of those changes so you notice them more quickly," David Crystal, honorary professor of linguistics at the University of Bangor, told BBC News. You can imagine how much longer it took new words to spread through word-of-mouth than it does today with the internet. So, how exactly does it spread?

How Slang Spreads on the Internet

The question of how slang spreads has occupied linguists and anthropologists for decades. When it comes to the mechanics of new word distribution, it's been tough to measure with any precision -- that is, until the advent of public social media networks.

Social media networks like Twitter allow linguists a more accurate and easily searchable record of our exchanges. Jacob Eisenstein and his colleagues at the Georgia Institute of Technology in Atlanta conducted a study examining 30 million tweets sent from different locations in the U.S. from December 2009 to May 2011. The purpose of the study was to pinpoint the origin of popular slang words and track how they spread across the country.

The resulting map shows how these slang terms migrated across the country, as well as the direction of that influence: 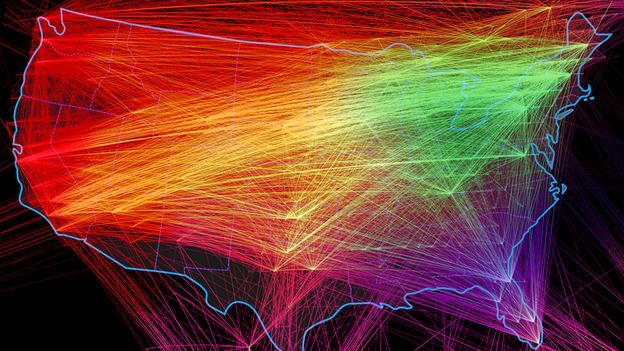 Because of social media, words are moving around the world within weeks and months, whereas before, it could take a few years, says Julie Coleman, author of The Life of Slang. "It's not necessarily that language is changing more quickly, but technologies have developed and they allow the transmission of slang terms to pass from one group to another much more quickly."

Internet Slang Around the World

As you can imagine, it's not just the English-speaking countries who have seen changes in language thanks to the internet. "Computer slang is developing pretty fast in Ukraine," says Svitlana Pyrkalo, a producer at the BBC World Service Ukrainian Service. For example, the force-quit process of pressing "Control, Alt, Delete" is known as Дуля (dulya). A dulya is a Ukranian gesture using two fingers and a thumb, used in the same situations in which we'd give "the finger." "And you need three fingers to press the buttons," says Pyrkalo. "So it's like telling somebody, a computer in this case, to get lost."

Other countries have adopted their own versions of common internet acronyms like "OMG" and "LOL." In France, the acronym "mdr" stands for "mort de rire," meaning "dying of laughter." The Swedish write "asg" as an abbreviation of the term Asgarv, meaning intense laughter. For those in Thailand, the number "5" signifies the Thai letter "h," so putting three 5's together, 555, translates to "hahaha."

How New Words Make It Into the Dictionary

So, how do new words, like the acronym "LOL," make it all the way to the dictionary?

The secret of a new word's success is its longevity, says Fiona McPherson, Senior Editor in the New Words Group at the Oxford English Dictionary. To make it into the dictionary, the general population must use it and keep using it. A word must be in use for at least five years to be considered, McPherson says. So, love it or hate it, when words like "LOL" become common, widespread, well understood, and stick around for more than five years, they're eligible for a spot in the big book.

There are plenty of internet slang words that don't make it in, like "wurfing" (the act of surfing the internet while at work). But to say that word was rejected would be wrong -- that word, among many others, will be revisited if its usage grows. The dictionary is a living, breathing document, and there's always a chance a previously downvoted word will make it into the mainstream vocabulary in the future.

That's where even the word "slang" gets a little fuzzy. Is a word considered "slang" until it graduates into an official word in the dictionary? When exactly does a word become "real"?

The fact is, only when a word becomes "real" -- as in, widely used and understood -- is it then considered for a place in the dictionary. "The time the academy finishes their dictionary, it will already be well out of date," says linguist Stephen Pinker. "We see it in the constant appearance of slang and jargon. Language is not so much a creator and shaper of human nature so much as a window onto human nature."

As it turns out, dictionary editors look to us when they vote on whether a word should have a place in their dictionary. "Dictionaries are fantastic resources, but they are human and they are not timeless," Language Historian Anne Curzan reminds us. "If you ask dictionary editors, what they'll tell you is they're just trying to keep up with us as we change the language. They're watching what we say and what we write and trying to figure out what's going to stick and what's not going to stick."

There will certainly be changes in language that we don't like simply because many of us don't like change, but Curzan thinks we should be less quick to impose our likes and dislikes about words on other people. Language change isn't worrisome, she argues -- it's fun and fascinating. "I hope you can enjoy being part of the creativity that is continually remaking our language and keeping it robust."

So, no matter whether you think internet slang vitalizes or destroys language, there's no denying how revealing it is of the culture that invents and uses it -- and the ease with which we adapt our language to new technologies and concepts.

How to Predict and Analyze Your Customers’ Buying Patterns