In the Streaming Era, How Do Most Users Consume Music?

Earlier this month, The Music Industry Blog published a report examining the way people listen to music online — namely, comparing how many use a streaming music service, such as Spotify or Pandora, to those who watch music videos on YouTube. 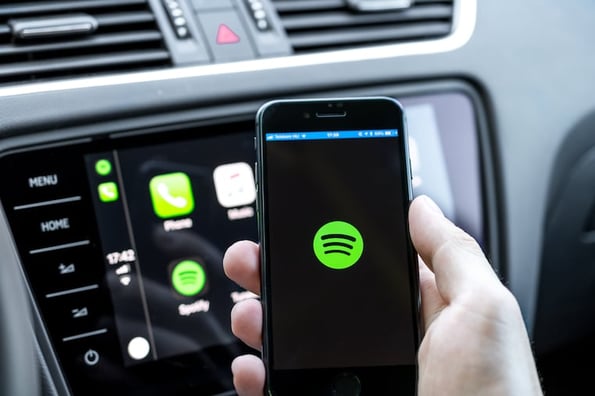 While a considerable number of consumers do use streaming audio services (37%), it’s outnumbered by the 55% who frequently watch videos on YouTube.

The music industry, it seems, has been continually disrupted for centuries, dating back to days prior to the invention of the phonograph. How and where people consume music evolves continually, with the growing advent of digital listening and viewing options shifting the shape of the industry.

We wanted to know: In the so-called “streaming era,” when digital audio platforms like Spotify are going public and music intersects with tech more than it ever has, how do people consume music?

After taking a consensus-style survey of over 2,500 people across the U.S., UK, and Canada -- here's what we learned.

How Many People Use Streaming Music Services? 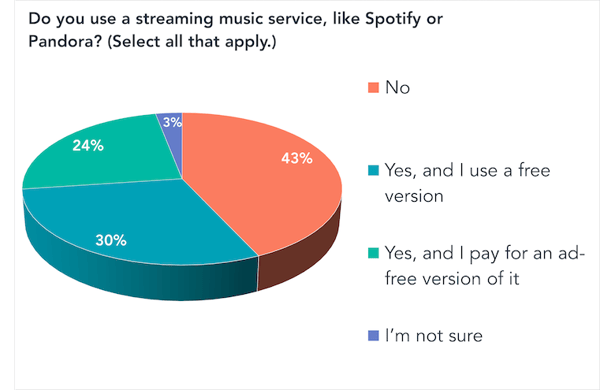 In total, over half of respondents said that they do use a streaming music service, though slightly more use a free, ad-supported version of it.

How Do People Primarily Consume Music?

Next, we wanted to know the various ways people consume music, whether through a streaming service or something else.

We framed this question two ways. First, we asked people to indicate the primary way they consume music. 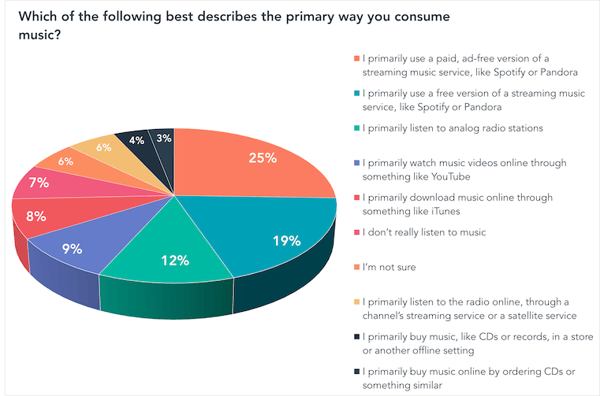 Again, we found similar findings within the category of streaming, with 44% of respondents selecting such services as their primary music consumption methods.

However, this time, slightly more respondents indicated that their primary music consumption method is a paid, ad-free version of a streaming service.

Then, we asked participants to indicate all the ways they consume music, to see if there was a significant difference in response.

Here, our findings more closely aligned with The Music Industry Blog's report, with a considerable percentage of respondents -- 28% -- selecting watching music videos one of their music consumption methods.

However, that method was still outnumbered by users who chose streaming services as a music consumption method, which totaled 50%.

Is Streaming Here to Stay?

Based on our findings, it appears that streaming remains at least one top choice for music consumption -- with most of the highest respondent selections being some sort of online music listening option, whether through these services or another digital method.

However, non-digital music consumption hasn't completely faded, with the third-highest number of respondents indicating that analog radio stations are their preferred listening platforms -- and some saying that they still physical buy music products in offline settings.

"As a creator, the blessings are considerably more mixed ... and some artists worry about how streaming might influence the music itself ... albums are less likely to be listened to in one sitting and in sequence."

But in order to begin answering the question, "Is streaming here to stay?", it's important to examine how we arrived at the streaming era, and the history of music consumption -- and repeated industry disruption -- leading up to it. 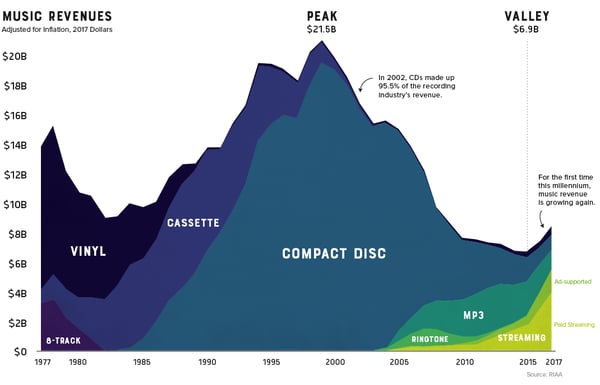 Examining music consumption methods raises the question of how modern listening preferences impact the artists and creators behind the work -- and how the promotion of that work continues to become disrupted and evolve as well.

For some artists, the impact is mixed.

"As a user of a streaming services, it's mind-exploding to have so much music accessible so readily [but] as a creator, the blessings are considerably more mixed," says Dessa Wander, an author and independent musician. "Streaming services don't pay creators very well. And some artists worry about how streaming might influence the music itself -- albums are less likely to be listened to in one sitting and in sequence -- long intros might tax the patience of a browsing listener."

So while the era of streaming results in combined factors for creators of the music played on such platforms, it does come with its share of benefits -- some of them, marketing-related.

"On the other hand, a service like Spotify can be a great tool for word-of-mouth. Users can text links to each other to share songs they like. And to be included in a big playlist can really catalyze a song -- even help break a record," Wander explains. "Streaming services are incredible discovery tools. The question remains, after an artist is discovered by a new listener, how does she get paid for the work?

Until the next disruption -- we'll be listening.