The Best Quotes From Oscar Wilde on Writing and Creativity [SlideShare] 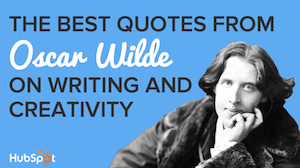 Getting stuck in a writing rut is the worst. There are few things more annoying and frustrating than looking at a computer screen, on deadline for your latest marketing project, only to have the cursor tauntingly blink back at you. You want to fix that awkwardly worded sentence or make a witty intro suddenly appear on your screen ... but it's not happening.

You've got to fix this.

Everyone needs different things to get past frustrating writing moments. When I get stuck, I look to one of my favorite writers of all time: Oscar Wilde. He's eloquent. He's thoughtful. He's sassy. Oh, and he has some pretty great advice for becoming a better writer. It's a winning combination that'll get me unstuck from even the deepest holes of writer's block.

If you're feeling stuck, want some tips for writing better, or just like pithy quotes from 19th-century writers, keep on reading. We've compiled a SlideShare presentation and tweetable takeaways below to keep you at the tippy top of your writing game.

“A writer is someone who has taught his mind to misbehave.” (Tweet This Quote!)

“I am so clever that sometimes I don't understand a single word of what I am saying.” (Tweet This Quote!)

3) Improve your own writing by reading the work of people you admire.

“It is what you read when you don't have to that determines what you will be when you can't help it.” (Tweet This Quote!)

4) Quality content is subjective, but good writing is constant.

“There is no such thing as a moral or an immoral book. Books are well written, or badly written. That is all.” (Tweet This Quote!)

5) Don't be afraid to step outside your content comfort zone.

“An idea that is not dangerous is unworthy of being called an idea at all.” (Tweet This Quote!)

6) Don't let the fear of failure prevent you from publishing. Everyone fails.

“Experience is merely the name men gave to their mistakes.” (Tweet This Quote!)

7) Being critical of your work makes it even better.

“The imagination imitates. It is the critical spirit that creates.” (Tweet This Quote!)

8) Writing can feel painful, but it's incredibly rewarding.

“Words! Mere words! How terrible they were! How clear, and vivid, and cruel! One could not escape from them. And yet what a subtle magic there was in them! They seemed to be able to give a plastic form to formless things, and to have a music of their own as sweet as that of viol or of lute. Mere words! Was there anything so real as words?” (Tweet This Quote!)

9) Don't obsess over perfection. At a certain point, you're just wasting time.

“I was working on the proof of one of my poems all the morning, and took out a comma. In the afternoon I put it back again.” (Tweet This Quote!)

10) Don't get stuck creating the same thing over and over again.

“Consistency is the last refuge of the unimaginative.” (Tweet This Quote!)

12) Don't think you have nothing to say. Your point of view is unique.

“Be yourself; everyone else is already taken.” (Tweet This Quote!)

13) Pass on your writing tips to others, too!

"The only thing to do with good advice is pass it on. It is never any use to oneself.” (Tweet This Quote!)

Got your own writing tips? In spirit of that last quote, share your favorites with everyone in the comments.