How to Give (and Get) Better Feedback on Blog Posts 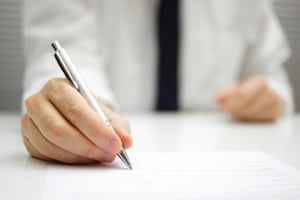 A few months back, I had written what I thought was an excellent blog post. From the first round of internal feedback it seemed it was all but ready to go, but when a second round of feedback from another interested party was provided, it ended with a sentence pretty much anyone hates to hear.

“Maybe we should rewrite this.”

It was the classic example of a pyrrhic victory: We got the post out, but in a lopsided and inefficient manner that likely cost more than it was worth. A solution was needed to prevent this from happening again -- in short, to create a feedback process that allowed for review and modification without taking up a disproportionate amount of time.

When Feedback Can Go Wrong

Like it or not, content creators, feedback and outside review is incredibly important for your work. Outside perspectives are important for identifying mistakes and oversights that you yourself may be oblivious to, simply because you made the piece of content.

If improperly managed, however, seeking and awaiting feedback can become a quagmire, with content often thrown back into re-writing or even thrown out altogether. Besides disrupting the flow of content, it can often become demoralizing for team members as their content goes straight back to the drawing board.

In such a scenario, as it was for us early on, feedback was merely an ad hoc process: It was sought whenever something was created. An ad hoc process generates two major problems:

1) Feedback is a late-stage issue.

This part of the process came to mind as we were reading Keith Frankel’s excellent post on defining what’s ‘good enough,’ when under time constraints and pressure to deliver. Oftentimes feedback is sought at the end of the writing process, when a draft (even a rough one) has already been completed. This means that revisions can be difficult or time-consuming, especially if there are structural criticisms.

2) Feedback providers can be caught off guard.

Without advance notice, those you expect to provide feedback might simply not be in a good position to do so. This either results in delays to the feedback they provide (and by extension the blog post publishing date), or a rushed skim-through that will not provide a quality response -- neither of which you want.

Instead of an ad hoc feedback process, it's important to incorporate it throughout the entire blog post creation process.

Integrating Feedback Into the Blogging Process

Fact: Crafting a blog post is like designing and building a home. Okay, not literally. But there are distinct similarities in the process that I’ll be describing below.

To solve the problems mentioned above, feedback needs to be structured -- and the writing process needs to follow the same structure. To help solve our feedback woes, we developed the following three-stage feedback system for blog posts deemed to require significant feedback. Each section corresponds to a certain stage of the writing process -- and a complete home renovation:

When you're going for a full home renovation or rebuilding, some of your earliest but most important decisions are going to be designating rooms, deciding what walls to put up or take down, and where wires and plumbing need to go.

This is the outline stage of a blog post, where the structure of the post and its general direction is established. Feedback at this stage is provided in broad strokes, and can modify the entire direction, style or focus of a given post.

So you've got your rooms defined, and the structural elements of your home are set. Now you're looking to flesh things out with interior design and making sure your bedroom actually, you know, has a bed.

This is the halfway point, where structure has been fleshed out and significant points developed. Here feedback is less structural, but focused on individual paragraphs in the post.

Your home is nearly livable, and all it needs now is some personal decor, maybe a lamp here, or adjusting the position of furniture. Needless to say, if you're only now thinking that maybe the bedroom should've been bigger, you're doing it wrong and revising it would be prohibitively costly.

This is what might normally be considered a first draft, with the blog post largely completed. By this stage structural feedback should already have been provided, and feedback tends to be minor sentence corrections or cosmetic.

Advantages of a Three-Stage Feedback System

It may seem bulky and cumbersome to establish so many levels, but such a system provides several advantages compared to simply requesting for feedback when a draft is done:

Structural and directional changes are easier.

Because broad, sweeping changes are made when a blog post is only 30% completed with a skeletal structure, you'll have a much easier time modifying it as compared to a fully written post.

Time can be more easily managed.

Because a fellow co-worker is not suddenly swamped by reviewing an entire post, feedback presents less disruption to a colleague's workflow and encourages a more in-depth review.

Once you settle into the rhythm of this system, you'll find it much easier to integrate it into your editorial calendar, and by defining times for seeking feedback, there'll be one less unknown that can disrupt your timetable.

Feedback Doesn’t Have to be an Unknown

Ultimately, this system allows us to balance between quality of work and the time taken to produce it: On occasion we’ve cut hours from the writing process because major changes were noticed and implemented early on. We're able to hit a level of quality right before the point where making things better costs more than it returns.

Give the feedback system a try: it'll help stabilize your content pipeline, and you'll be in a much better position to produce the optimal blog post -- high quality, but maybe not 100% perfect, in a reasonable amount of time.

In a way, that’s about as perfect as you could hope to expect.

Do you have a feedback process set up at your company? How does it help you get better content out the door?