Continuous Integration: What It Is and How to Achieve It 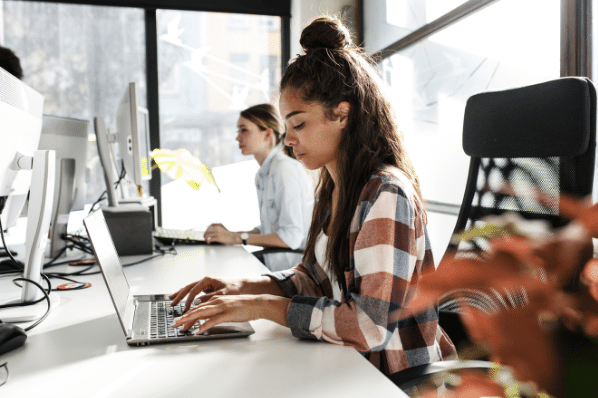 It can be intimidating to tackle a large project by trying to do everything at once. Instead of saying, "I'm going to build a website today," start with "I'm going to map out the user interface and the website functionality."

Then, move on to selecting the technologies to build the infrastructure of the site. Next, set up a frontend and backend. After that, focus on connecting them so that sample data can be requested, received, and displayed in the interface. Next, set up a route so that user-generated data can be submitted to the database.

At this point, don't worry about the appearance of the website or the features. Why? Because focusing too much on the end product would risk missing basic but crucial details at the start. By taking the project one step at a time and validating each change, you will be more confident that you're building a solid codebase that supports greater functionality and a flashy interface.

This hypothetical approach to building a website is a simplified example of the principles of continuous integration in action.

What is continuous integration?

Continuous integration is an approach to development where code changes are regularly merged into a shared repository or branch. The combined codebase is then built into a test application where automated tests are run against it to root out bugs. Any discovered defects are turned back over to the developers to fix.

Continuous integration (CI) is a cornerstone of DevOps pipelines and is used in agile development workflows. The goal of this approach is to limit the amount and complexity of merge conflicts by implementing frequent pushes to the mainline. Once code is integrated and tested, code on local machines is updated with frequent pulls so that developers are always working with the latest version of the code. 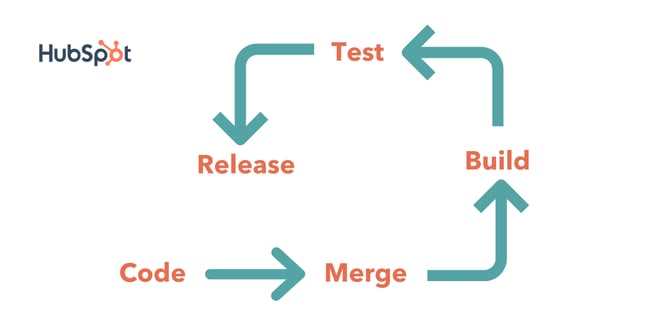 In the traditional software development lifecycle, CI centers on the build and integration stages. The CI pipeline is achieved through a combination of automation (tools and services) and cultural shifts (aligning team values and goals to DevOps principles).

This video from freeCodeCamp provides another explanation of CI:

In traditional software development approaches — such as the waterfall model — developers would be assigned features to build throughout the sprint. At the end of the sprint, the engineers combine their finished code to create the final codebase to build the application.

This approach sounds ideal, but the reality is that two developers may end up editing the same part of a file.

What happens if Developer A has extended a snippet of code's functionality to support their feature while Developer B has deleted that same code snippet? Both have been working with different versions of the same file for weeks, and now their edits fundamentally conflict with each other. The process to solve this conflict is tedious and time-consuming.

Multiply this risk by multiple developers working in hundreds or thousands of files for enterprise-size applications, and you can see why this pitfall came to be known as "merge hell" — sometimes referred to as "integration hell."

CI addresses this inefficiency in traditional development pipelines using automation to increase the frequency of merging and integration from weeks to days or even hours. Now any merge conflicts are much smaller and simpler in scope, speeding the time to resolution for the development team. Additionally, engineers are now working with a codebase that reflects their peers' changes, keeping everyone on the same page.

In addition to solving this common roadblock, continuous integration offers several other advantages.

CI provides benefits for both the development team and the organization at large, which are covered below.

Every commit now triggers an automated code review and test process. If the code fails, the developers are immediately notified so they can work on fixing the bug. Because CI emphasizes regular commits — usually at least once a day — developers now constantly validate their work versus waiting until the end of the coding phase.

Another benefit of constant commits is that the code is continuously updated and tested. Development teams have greater confidence in the application because they are consistently receiving feedback from their automated tests. This greatly improves the odds that the final product will meet project requirements since they have confirmed each new feature or component against these expectations.

3. More Visibility for the Organization

Tools that build CI pipelines can also track progress on feature creation and other development goals. This data is also used to keep other stakeholders informed about the timeline for rollouts.

The operations team can track when they should expect to receive packages for release from development. Business teams can see the expected time of delivery for new features to keep their customers informed, and marketing teams can develop collateral and campaigns around new capabilities for the product as they're being built instead of after release.

4. Constant Availability of a Testable Build

Code is constantly being integrated as changes are made and validated against test cases. This ensures that there's always a testable build of the application for the quality assurance (QA) team to evaluate for performance and configuration requirements.

The QA team can then communicate any deficiencies back to the development team, improving the turnaround time rather than discovering these issues after the coding phase is completed.

CI can only deliver its full benefits with a robust testing strategy. Otherwise, all a development team may accomplish is streamlining the pipeline for committing defective code.

An added benefit of this focus on testing is that business and development teams have extra incentive to clearly define objectives at the start of the lifecycle. Thorough planning is essential so that the engineers can write the test cases to validate that the code meets these goals.

Continuous integration is the first step many development teams take to accelerate their software lifecycle. The next step is continuous delivery, which automates the release of the merged code for manual deployment.

Some organizations expand this approach with continuous deployment, which automates the release and deployment processes so the code enters production without any human intervention. Combined, these strategies form the CI/CD pipeline.

Now that you understand continuous integration and its significance, let's examine how it's used in practice.

How does continuous integration work?

CI allows software developers to segment responsibilities and independently code features in parallel. To build a CI pipeline that effectively supports this workflow, a few different toolsets are required.

Finally, the pipeline needs a testing suite. This subset of tools can be used to perform code quality checks and syntax reviews before the code is committed and to perform unit testing after the codebase is compiled and the application is built. 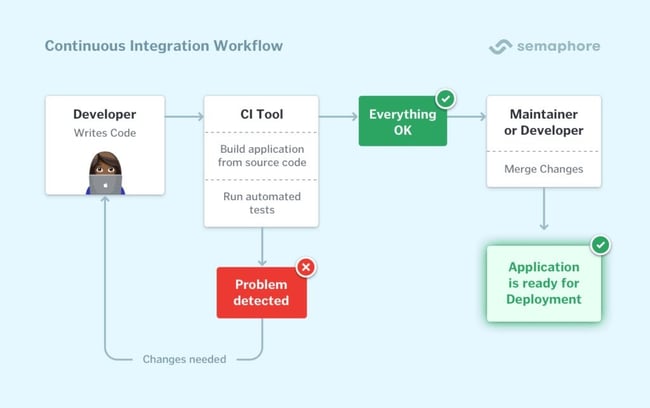 Once the pipeline has been orchestrated with the proper tools, a sample CI workflow would look like the following:

This video from Edureka reviews the concept of CI, its purpose, and then walks through how to build a sample CI workflow with Jenkins:

CI is an important cornerstone of DevOps and aligns with the DevOps model's approach to constant iteration and improvement. In addition, CI synergizes with other DevOps best practices, such as Shift Left testing and automation.

CI tools also keep the rest of the organization informed on development progress so all stakeholders can plan their efforts to match the pace of development and produce better business outcomes. CI delivers on an agile team's central goal: produce higher quality software faster.

Machine Learning DevOps: How Does It Compare to DevOps?