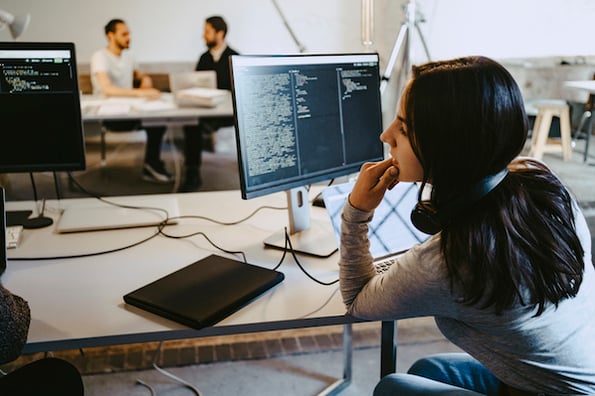 For those who are new to web development, or trying to figure out what all the fuss is about, let’s look at React, how it works, and what makes it different from other JavaScript frameworks.

The React.js framework is an open-source JavaScript framework and library developed by Facebook. It’s used for building interactive user interfaces and web applications quickly and efficiently with significantly less code than you would with vanilla JavaScript.

In React, you develop your applications by creating reusable components that you can think of as independent Lego blocks. These components are individual pieces of a final interface, which, when assembled, form the application’s entire user interface.

React’s primary role in an application is to handle the view layer of that application just like the V in a model-view-controller (MVC) pattern by providing the best and most efficient rendering execution. Rather than dealing with the whole user interface as a single unit, React.js encourages developers to separate these complex UIs into individual reusable components that form the building blocks of the whole UI. In doing so, the ReactJS framework combines the speed and efficiency of JavaScript with a more efficient method of manipulating the DOM to render web pages faster and create highly dynamic and responsive web applications.

A Brief History of React.js

Back in 2011, Facebook had a massive user base and faced a challenging task. It wanted to offer users a richer user experience by building a more dynamic and more responsive user interface that was fast and highly performant.

Jordan Walke, one of Facebook’s software engineers, created React to do just that. React simplified the development process by providing a more organized and structured way of building dynamic and interactive user interfaces with reusable components.

Facebook’s newsfeed used it first. Due to its revolutionary approach to DOM manipulation and user interfaces, React dramatically changed Facebook’s approach to web development and quickly became popular in JavaScript’s ecosystem after its release to the open-source community.

What does React.js do?

Typically, you request a webpage by typing its URL into your web browser. Your browser then sends a request for that webpage, which your browser renders. If you click a link on that webpage to go to another page on the website, a new request is sent to the server to get that new page.

This back-and-forth loading pattern between your browser (the client) and the server continues for every new page or resource you try to access on a website. This typical approach to loading websites works just fine, but consider a very data-driven website. The back and forth loading of the full webpage would be redundant and create a poor user experience.

Additionally, when data changes in a traditional JavaScript application, it requires manual DOM manipulation to reflect these changes. You must identify which data changed and update the DOM to reflect those changes, resulting in a full page reload.

This pattern is known as client-side routing because the client doesn’t have to reload the full webpage to get a new page each time a user makes a new request. Instead, React intercepts the request and only fetches and changes the sections that need changing without having to trigger a full page reload. This approach results in better performance and a more dynamic user experience.

React then figures out the least expensive way to patch the actual DOM with that update without rendering the actual DOM. As a result, React’s components and UIs very quickly reflect the changes since you don’t have to reload an entire page every time something updates.

How to Use React.js

In contrast to other frameworks like Angular, React doesn’t enforce strict rules for code conventions or file organization. This means developers and teams are free to set conventions that suit them best and implement React however they see fit. With React, you can use as much or as little as you need due to its flexibility.

Using React, you can create a single button, a few pieces of an interface, or your entire app’s user interface. You can gradually adopt and integrate it into an already existing application with a sprinkle of interactivity or, better yet, use it to build full-fledged powerful React applications from the ground up, depending on your need.

You can plug React into an already existing web app over a content delivery network (CDN) to add some interactivity to that HTML page. By doing so, React gains control over that specific portion of that website, like a sidebar, widget, or something else entirely. These are just reusable and interactive React components with a sprinkle of React functionality.

You can achieve just that in three simple steps.

The first step is to add the two main CDN scripts to your website’s HTML index file. You need these scripts to load React into your app over a CDN service.

Second, you create a <div> somewhere in your markup file to mark the portion where you want to plug in and render the React component. You also give it a unique ID that we use later in the JavaScript code to locate the spot. For example:

The final step is to create the actual like_widget JavaScript file, as shown below:

If you run the application, it will render “Hello World” to the browser in the exact spot you marked as shown below.

You might have noticed a weird syntax called JavaScript XML (JSX) returned by the ActualWidget function. You use JSX with React to combine HTML and JavaScript with ease. Facebook developed JSX as a syntax extension for JavaScript to extend HTML functionality by embedding it directly into JavaScript code. With JSX, there is no need to separate HTML and JS codes as React allows you to write declarative HTML directly in JavaScript code.

Although you can easily drop React into an existing web application to create small pieces of an interface, it is more practical to use React to build fully-fledged web applications. However, React arguably has heavy tooling configuration requirements that are typically daunting and tedious to set up when creating new React applications.

Luckily, you don’t need to learn this build setup or configure the build tools yourself. Facebook has created a Node package command-line tool called create-react-app to help you generate a boilerplate version of a React application. This package benefits you from working out of the box and provides a consistent structure for React applications that you will recognize when moving between React projects.

Creating a new React project is as simple as running the following commands in your terminal: 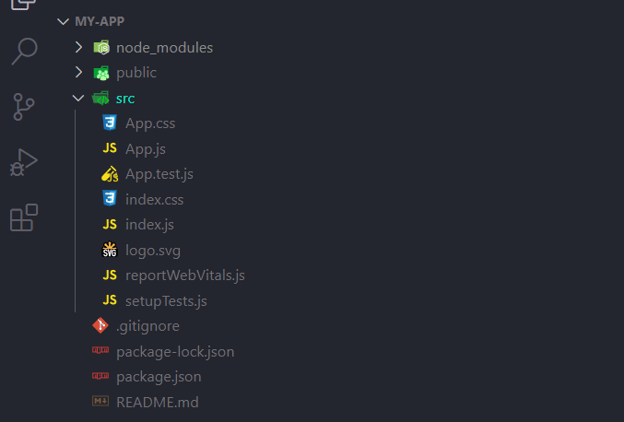 Because of its ability to create fast, efficient, and scalable web applications, React has gained stability and popularity. Thousands of web applications use it today, from well-established companies to new start-ups. A few notable mentions are:

Getting Started With React.JS

This article introduced React.js, provided its history, and showed how React extends the capabilities of JavaScript. It also provided some example use cases for how developers use React.js and some brief code snippets showcasing React.js code and its syntax to highlight why developers choose to use React.js instead of using JavaScript alone. The article concluded with some real-world examples of popular apps built using React.js.

React provides state-of-the-art functionality and is an excellent choice for developers looking for an easy-to-use and highly productive JavaScript framework. Using React, you can build complex UI interactions that communicate with the server in record time with JavaScript-driven pages. Say goodbye to unnecessary full-page reloads and start building with React.