Is SRE vs. DevOps the ultimate battle between good and evil? It’s not that serious, but it's fun to pretend it is. The idea sounds like a quest to find the best, but it’s more like two friends sparring to hone their skills. 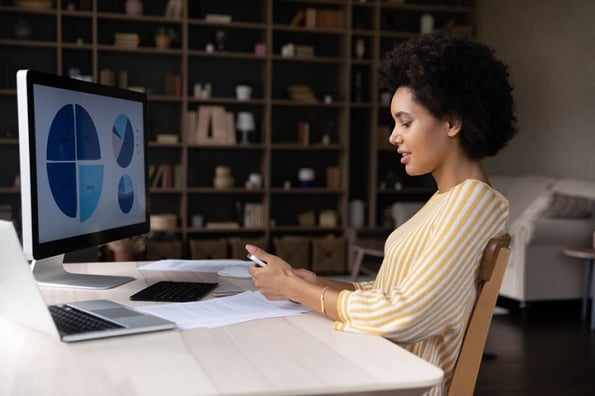 DevOps and SRE are not the same things, but they strive for the same goals. This post will break down the similarities and differences between the two, and how each is relevant to your business.

Site Reliability Engineer is a new role added to the software development process, meant to fill the gap between development and operations teams. Communication, efficiency, and adaptability are all improved through this role.

Let's look at a few basic concepts of an SRE below.

The SRE role handles the transition from development to operations by assisting with support escalations, reporting, and system documentation. It also determines what new features and updates should be added and then validates them before deployment.

In the SRE role, a team member will be in charge of configuring and deploying software needed by the operations team to fill the gap between development and operations. In addition, if new changes are required, the SRE team member will further assist by managing the implementation across both teams.

This improvement allows the development process to consider operation needs from the start of the pipeline, improving communication and efficiency across both teams. It also fosters a better understanding of the requirements for the entire process.

To learn more about DevOps, check our ultimate guide here.

DevOps aims to improve the current structure and performance of the existing development and operations teams. In addition, DevOps offers practices that change the traditional approach to the software development lifecycle.

Let's talk about some of those practices below.

When it comes to SRE vs. DevOps, it's not as much about which approach is better, but rather how they are different from each other. For example, DevOps aims to bridge the gap between development and operations, whereas SRE seeks to fill that gap.

These two concepts can stand alone or together. Separately, these roles offer benefits that bolster your team's performance and quality of work. However, these roles can improve quality and performance when used together in support of each other.

They are really two sides of the same coin reaching for the same goal, but they do have some differences in the way they achieve it.

Let’s look at a few of those differences below. 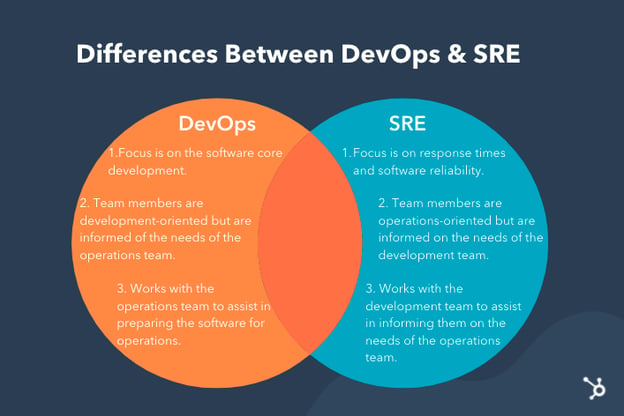 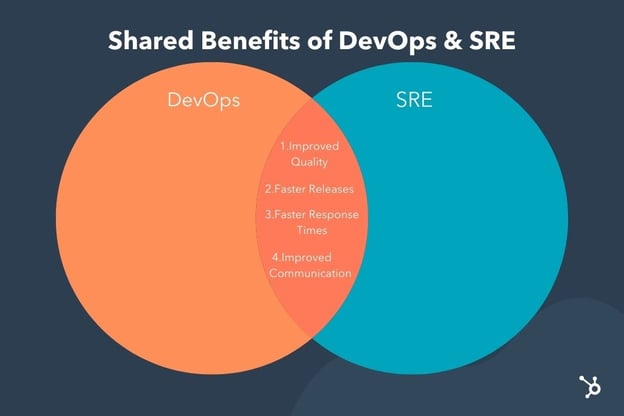 Adding an SRE role to your DevOps workflow can further improve communication and implementation of specific tasks. For example, a Site Reliability Engineer can handle automating functions that simplify workflows and assist in handing off responsibilities of one team to the other.

The SRE role can also help fill in the gaps between development and operation to ensure that requirements or goals do not end up overlooked. This role also checks that any development issues are properly handled before deployment to operations.

When you couple these benefits with those of a DevOps workflow, the outcome is far greater than either individually. Let's list off a few benefits of both below.

With improved quality, your team can focus less on minor issues and more on significant problems that need more attention. It also means that in the end, there will ultimately be fewer issues that require any attention, as the SRE role will identify them early in the pipeline.

Reducing the number of issues and your team's workload means increasing productivity and forward momentum. This increase leads to faster releases with more production-level reliability.

Should issues arise, this joint effort between these roles will allow a faster response time for your teams; solving problems fast improves product reliability and consistency in performance.

Improved communication means less gets lost in translation and the overall quality, efficiency, and speed of your teams' workflow.

With this beneficial pairing, you may be wondering what salaries for these roles look like; let’s look at the average wages by comparison.

The salary for an SRE role can vary depending on a few different factors, including location, experience, and more. However, research done by BuiltIn — a site used to unite employees with employers — indicates an average pay of $137,359. The low end of this range is $85k up to $255K a year.

For a DevOps role, the salary can vary depending on many factors. However, looking at the data from BuiltIn, this role earns an average of $141,760 a year, with a range of $45k and $325k.

Final Takeaways on SRE vs. DevOps

It's important to understand that these concepts are not opposing forces; they are complementary and standalone. You may not need both to maximize your team's productivity and quality of work, and in that vein which one is best is entirely up to you.

However, there are many benefits to both, and in conjunction, they can boost the benefits of each other, creating a workflow that improves not only the work but also employee well-being. Happy workers always do better work; the less your team has on their plate, the better they can focus on the tasks that require their attention.