Which Marketing Tactics Are The Most Overrated? [New Data]

If you were to ask a room full of marketers from all over the world which marketing tactics they think are least worth the investment, you'd probably get a flurry of strong opinions.

But what if you asked them to name the most overrated marketing tactic? Would their answers vary that much?

We surveyed 4,000 marketers and salespeople around the globe for our 2015 State of Inbound report and found that, no matter where they came from, marketers agreed on the #1 most overrated marketing tactic.

What's the Most Overrated Marketing Tactic?

According to our research, marketers around the globe agree that traditional paid advertising is the #1 most overrated marketing tactic. 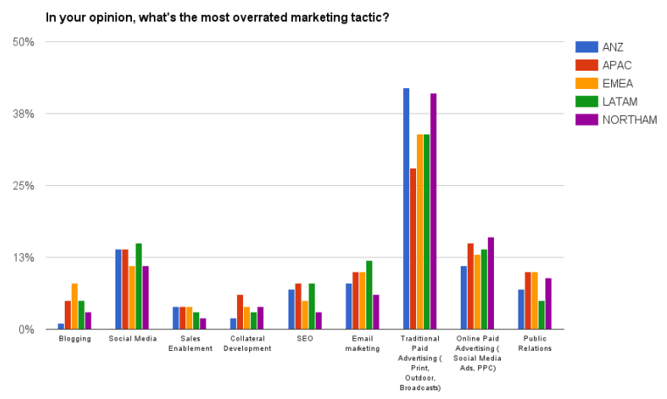 When we segmented these results by region, here's what we found:

When it comes to generating leads and filling the top of your sales funnel, traditional outbound marketing tactics -- where marketers push their message out far and wide in the hopes that it'll resonate -- isn't as effective as it used to be. 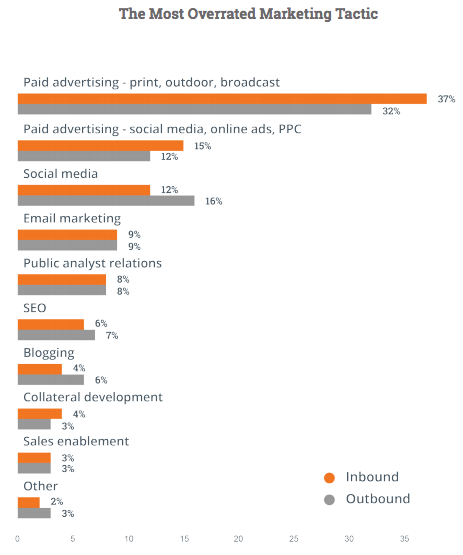 While this could be explained by large companies (200+ employees) dedicating money to paid as a sort of diversification of their marketing portfolio, it's worth repeating that the smart money is on inbound.

Although marketers across the board rated outbound tactics as the most overrated of all marketing tactics, that doesn't mean marketers should cut them out of their strategy completely.

If it's in your budget, online outbound marketing tactics like social media advertising and PPC are actually great supplements to those more effective inbound marketing efforts.

When done right, ads can play an important role in giving proven content a more prominent stage, whether it’s in maximizing reach to an existing audience or launching campaigns in a new market. For example, users who are retargeted to are 70% more likely to convert. And native ads that include rich media boost conversion rates by up to 60%.

And because these tactics are done online, it's easier to measure their ROI -- especially if you have the right tools. One reason online outbound tactics were rated as one of the most overrated marketing tactics under offline outbound tactics is likely because many marketers still haven't been able to measure their efforts -- though current tools can help you do that much better. (HubSpot customers: Read this post on our customer blog for tips on measuring the ROI of social using HubSpot.)

That being said, each social network comes with its own strengths and weaknesses. Read this blog post to learn more about the pros and cons of advertising on each platform. If you want a more comprehensive guide to social media advertising, download and read our free ebook, The Essential Guide to Social Media Advertising.

Are we seeing signs of social media fatigue?

What does this say about the state of social media marketing? Where is the fatigue coming from?

After all, social media activity actually has potential to help increase website traffic and sales. It impacts your organic search presence, helping your content rank higher in search engines. It's also a way for businesses to speak directly with their customers, which helps build customer loyalty. For example, a company called Coffee Groundz started using Twitter as a direct order channel with customers and increased sales and market share via Twitter by 20-30%.

Marketers experiencing social media fatigue are likely having trouble strategizing and picking the right tools to achieve the results they're looking for.

What observations do you have from the results of our survey on overrated marketing tactics? Do you agree/disagree with our survey respondents? Share your thoughts with us in the comments.